Despite standing next to one another in numerical sequence, Mozart’s Piano Concertos in F-major and in D-minor are poles apart in the emotional worlds they inhabit, even if the latter’s minor-key turmoil is not necessarily as ruggedly raw and proto-Beethovenian as commentators often suggest – I think of Schumann’s words about the G-minor Symphony No.40 (possessing “Grecian lightness and grace”) as also applying here to some extent, rather than reading back into the work any Romantic angst which was alien to Mozart’s spirit. 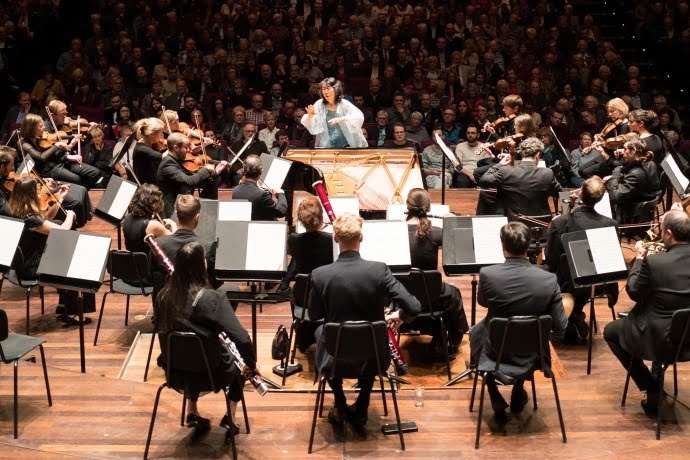 In directing the two Concertos from the piano, Mitsuko Uchida’s performances with the Mahler Chamber Orchestra imparted to both a certain flickering, nervous energy that brought them into somewhat closer proximity in expressive terms than might be expected. That was more natural in No.20, with hard sticks on the timpani and natural trumpets (though, oddly, modern horns) and vibrato-less strings. But in both works the orchestral introductions and subsequent episodes did not dovetail, somehow, with Uchida’s much more assured forays on the piano, where she seemed better able to lead the course of the music than when conducting. The opening of No.20 was quiet but foursquare, that of No.19 urgent, but it was only on playing the solo passages that Uchida brought out that indefinable sense in Mozart’s music that it asks an open question, anticipating or even yearning for something to follow of equal or surpassing beauty to that which went before. She achieved that in the probing account of No.20 and in the puckish way with No.19, but that failed to carry over into a coherent interpretation of each Concerto overall and create a seamless structure.

A more pregnant hush in the slower second movements of both would have been welcome. No.19’s Allegretto came over as a touch too self-conscious or laboured, though Uchida’s solo was gracefulness and charm itself, whilst in the ‘Romanze’ of No.20 the MCO provided a more sumptuous cushion of sound in its reposeful outer sections but the more turbulent central passage was announced with comparative indifference. Despite the corporate and individual musicianship, the interpretations felt like less than the sum of their parts.

For an encore Uchida played the Minuet from Schubert’s G-major Sonata (D894), more as though it were a Scherzo, combining Beethovenian impetuosity and Chopinesque delicacy and stylishness in the contrasting passages of its principal section, offset by a tender, even fragile Trio.

The MCO was more at home in the Three Pieces from Berg’s six-movement Lyric Suite for string quartet, which Berg arranged for string orchestra. With much less directorial intervention from Matthew Truscott the music was executed with greater spontaneity than the Mozart, despite its technical difficulties, especially the increasingly frantic whisperings of the central Allegro misterioso as though behind a veil. Throughout, the MCO performed as if engaged in a conversation, phrases rising and falling in natural flow, and answering each other. If the opening Andante amoroso was also mysterious in atmosphere, it was certainly not amorphous, and the concluding Adagio appassionato offered more emphatic washes of sound that impelled the sequence to its febrile end, a telling, if not obvious, bridge between the Concertos.