Mandela Trilogy
Music: Acts I & III by Peter Louis van Dijk and Act II by Mike Campbell to a Book and Lyrics by Michael Williams 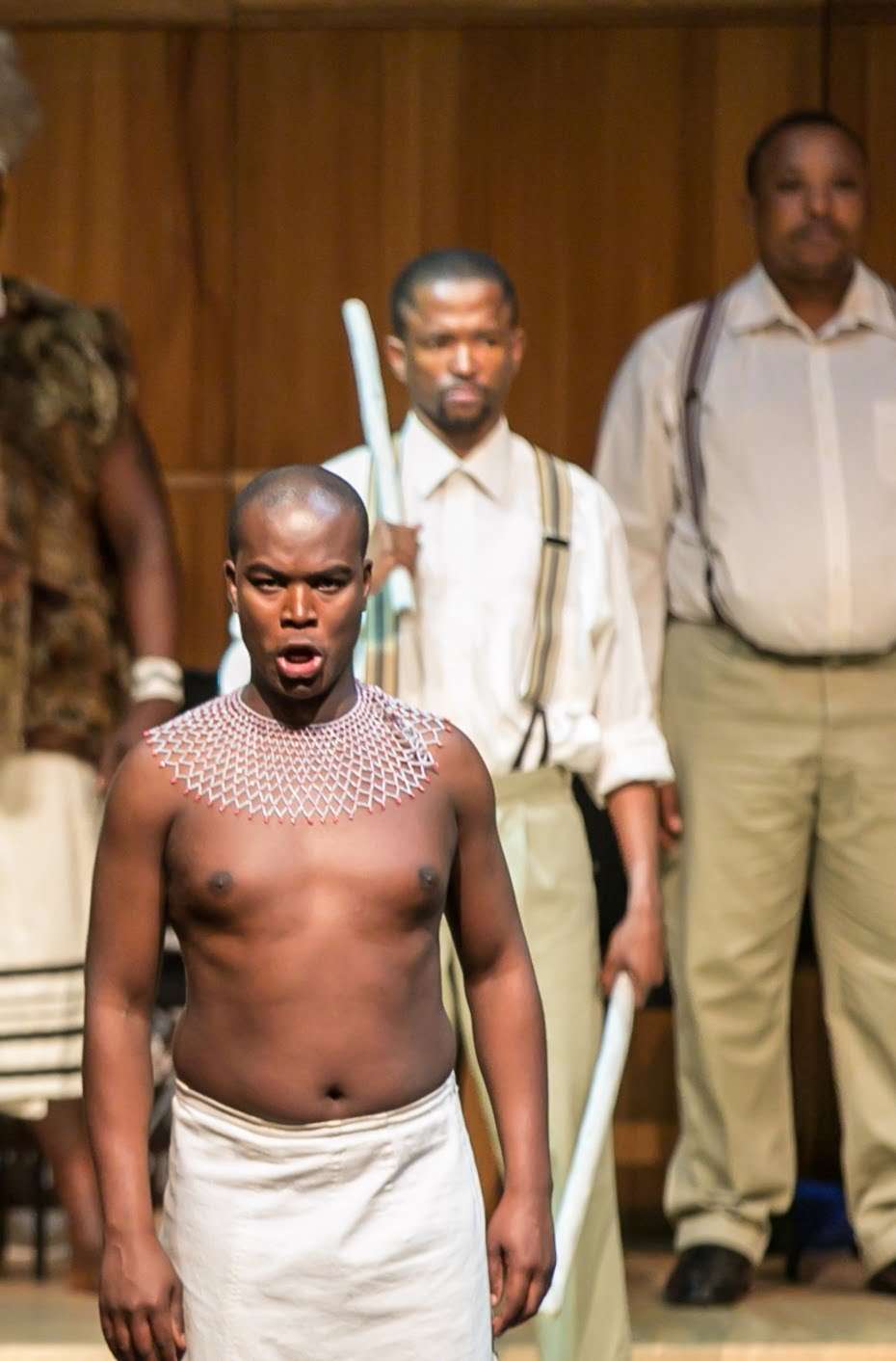 There have been plenty of operas and music-theatre pieces about people whose lives have made a significant impact on the World – from Saint-Saëns’s Henry VIII to Britten’s Gloriana, from John Adams’s Nixon in China and The Death of Klinghoffer to Andrew Lloyd Webber’s Evita, and the now-forgotten musical, King.

Indeed, it is the last work that perhaps comes closest to Mandela Trilogy. Martin Luther King and Nelson Mandela were the two most significant black leaders in the struggle for racial emancipation in the second half of the 20th-century – in the United States and South Africa respectively. Both were successful in realising their aim; each was a Nobel Peace prize-winner, but King was assassinated at the age of 39, his work not wholly complete: the spectre of racism remains prevalent in some aspects of American society, almost fifty years after his death. Whereas King’s struggle ended in tragedy, Mandela – after being released from prison, having been incarcerated for twenty-seven years – lived to be ninety-five and his country’s first President, lauded across the globe.

Perhaps, in purely dramatic terms, Martin Luther King’s story is more suitable for theatrical treatment, but in Mandela Trilogy we are presented with three (one-Act) operas by two composers – the first and third by Peter Louis van Dijk and the second by Mike Campbell – covering aspects of the early, middle and final periods of Mandela’s life, dramatised and staged – and doubtless conceived from the start – as being an evening’s vehicle on which individual songs can be pegged, rather than through-composed. With two composers, therefore, one might be forgiven for not expecting a consistent portrayal of the central protagonist’s evolving development or inner nature, but such an approach does afford the creators the chance to depict aspects of Mandela’s moral qualities: suitable vignettes, rather than the slavish depiction, as popularly perceived – and therefore almost inevitably superficial – of his personal character.

The result, however, comprehensively demonstrates how wrong such an a priori assumption can be: Mandela Trilogy is a remarkably successful and surely unique large-scale piece of music-theatre. It cannot strictly be termed an opera, although the work manifestly possesses many operatic elements, and it is certainly not an operetta; nor can it be considered a serious musical – but instead of drawing up a list of what it is not, let us concentrate on what it is. 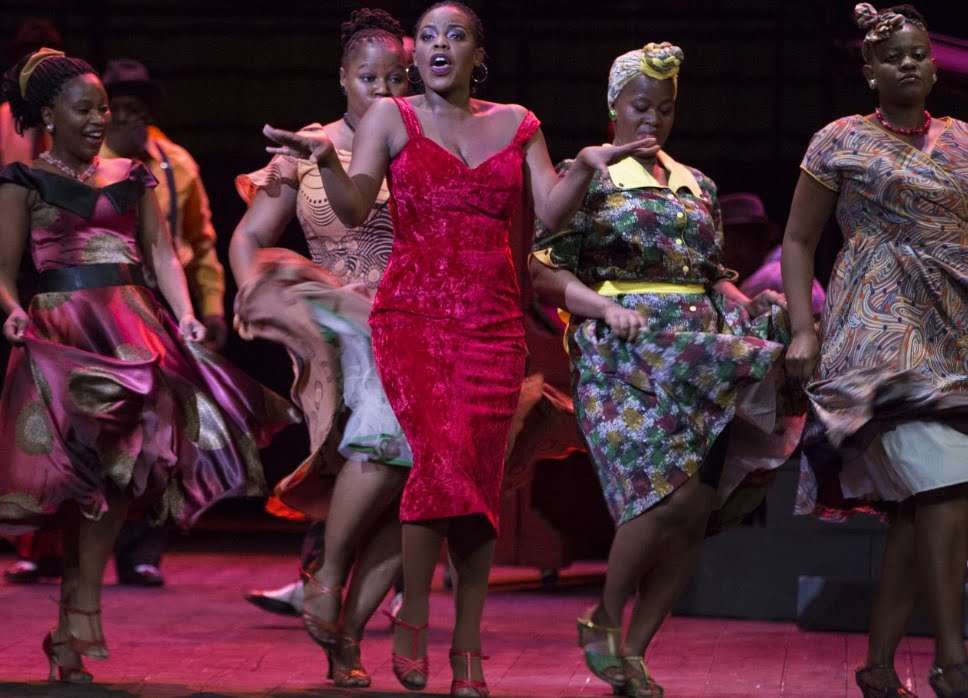 The most striking aspect of it, as a work of art, is that it is South African. Mandela Trilogy has no immediately recognisable characteristics of European music-theatre: the subject-matter is, self evidently, South African – uniquely so, in that quite early on we are confronted, in the libretto, with an almost thrown-away statement that came to define Mandela’s life-work: the singular conceptual wrong which to he would devote his life, and sacrifice his family’s desires, in putting right.

In Act One, the young Mandela comes to realise that the indigenous people of his native Transkei are “slaves in our own land”. This monstrous historical injustice, self-evident to everyone today, is the one concept that Mandela – later through the banned African National Congress – sought to change, by force if so driven. But the first part – depicting Mandela as a youth and young man – is preceded by a Prologue, in which the mature man looks back over the driving force of his life and how it changed him so profoundly.

The man’s destiny having been chosen for him by fate, the second part follows at once, virtually segued, and we are in the city in the mid-1950s, the grotesque anomalies of apartheid now beginning to bite in urban Johannesburg, in Sophiatown, the black suburb which was destroyed under apartheid. We are in the Jig Club, the music almost entirely 1950s’ pop style, occasionally more-faster-driven (in beat), with sly jazz inflexions, culminating in a terrific dance number ‘Pata Pata’, which can certainly teach Leonard Bernstein’s ‘Mambo’ from West Side Story a thing or two, first cousin to the great southern hemisphere hit of 1959 (and later) ‘Sucu sucu’.

Here are the urban native South Africans at play; structurally, the central part of this trilogy might be considered analogous to Act Two of Puccini’s La bohème or his La Rondine (the latter a more telling comparison); in any event, the natives’ great natural sense of music and rhythm are wonderfully recreated by Campbell, not in the least stylistically inappropriate with van Dijk’s Prologue and first part. But there is drama here, as well as fun: Mandela, on his way to the Jig Club with Father Trevor Huddlestone (a white Anglican bishop, a staunch and vocal anti-apartheid campaigner), is stopped by the police: Huddlestone is taken away, and Mandela is allowed to go to the club. 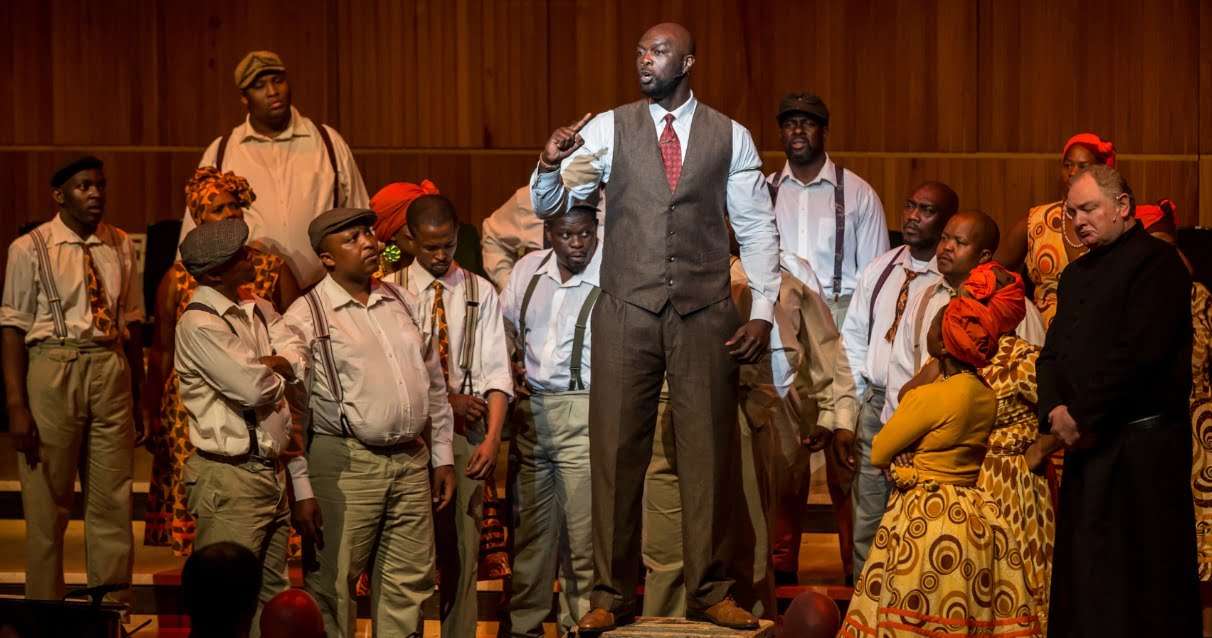 But resistance to the government is futile: Sophiatown and the Jig Club are bulldozed and the population forcibly removed; the seeds of revolution are further ensconced in the people and Mandela, and his colleagues. He and his friends are arrested on charges of high treason.

The final part opens with Mandela’s (and his colleagues’) trial, the text taken virtually word for word from the court transcript. He is found guilty and sentenced to life imprisonment – almost a relief, as the death penalty could have been imposed. Now the story comes into its own, concentrating upon Mandela in jail; his very occasional visitors, the hunger strikes and other deprivations over the years of his incarceration. Eventually, the government releases him, and falls: Mandela Trilogy ends with his great speech, given before a vast crowd in Cape Town on the day of his release.

That is a broad outline of Mandela Trilogy, but the production (naturally somewhat curtailed in terms of the platform of the Royal Festival Hall, the singers behind the orchestra) lost very little from a theatrical point of view. In this regard, we could concentrate upon a number of the ethnic singers – and here, the essential Suid-Afrikan dialect in English rendered the surtitles essential. And the personification of ‘ordinary people’ struck home considerably in the sense that much of the word-setting might seem curious to European ears, alongside the musical phraseology.

As just one example, towards the end, to hear the words “We have work to do” (Mandela to his jailer on his release), would have been set by any European composer – and sung by any European-trained singer – as one unbroken phrase: but here, one could sense opera-goers in the audience making a sharp intake of breath as Mandela tells the Whiteman who has freed him: “We have work” [breath] “to do”. Such linguistic idiosyncrasies might jar on European ears, but came across as perfectly natural.

In this regard, both composers are served by a magnificent cast and outstanding playing from the Cape Town Philharmonic under the exceptional Tim Murray – the horn section, especially, is of high international standard.

There are a number of works in which one character is depicted at different stages in their lives by more than one singer: in Mandela Trilogy, we have three with them singing in unison at the trial (Mandela’s ‘characters’ as one). The result was utterly compelling: here, we had to concentrate on the character of Mandela at various periods in his life as portrayed by three very different (in appearance) singers; a theatrical masterstroke, for we were compelled by character, each outstanding. 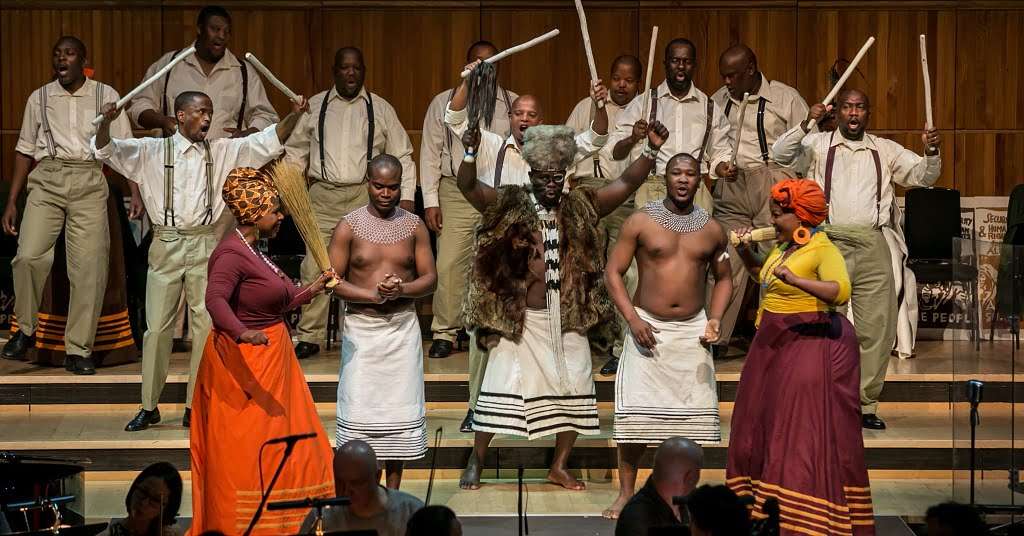 The more consistent characters were the women: Mandela’s Mother and wives/partners were equally well-portrayed, not cardboard cut-outs; the a cappella female setting as Mandela and others, taken from their women, is another truly moving highlight of the score, Mandela’s prison soliloquies another.

Throughout this compelling evening, one was constantly surprised and moved by the telling of the story and its occasional background colouration, and by the sheer life-enhancing nature of the music and the performances. Some may criticise the absence of some events – the Sharpeville massacre, with almost seventy unarmed peaceful demonstrators shot dead by the South African Police; the murder of Steve Biko in police custody (as Mandela said “They had to kill him to prolong apartheid”) – or white politicians who railed against apartheid (Helen Suzman, especially), but Mandela Trilogy is about Nelson Mandela, whose life and achievements and sayings “We ought not to want to live in a country at war with itself” are more than worthy of being commemorated in music, and are, here, to a very convincing and successful degree.

Overall, and to my freely-admitted surprise, here is an astonishingly provocative and hugely successful achievement.