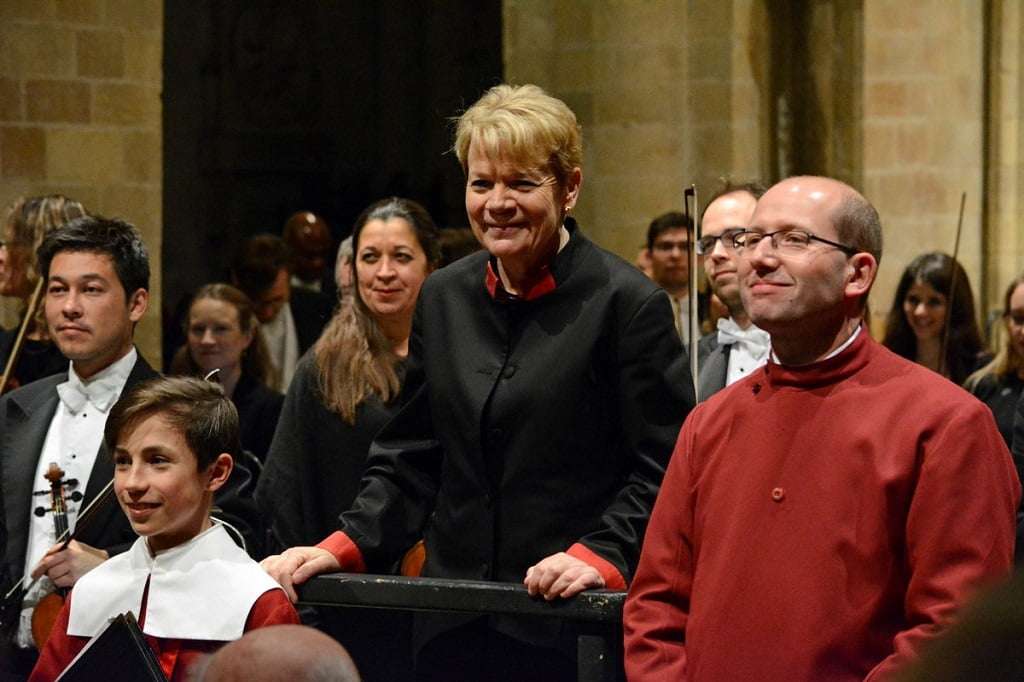 This final hurrah for Leonard Bernstein brought to a close Chichester’s year-long centennial celebration of the composer whose Chichester Psalms had its first UK performance there in 1965, commissioned by Dean Walter Hussey whose chutzpah had given life to music, among others, from Britten, Finzi and Walton and art-works from Marc Chagall, John Piper and Graham Sutherland.

Marin Alsop – a Bernstein pupil – spoke about her mentor, declaring his legacy to be one of “unity, tolerance and love”. In coupling Christian and Jewish composers, the music of Bernstein and J. S. Bach, unlikely bedfellows as they are, delivered its own universal message. ‘Jeremiah’ (1942) is a passionate indictment of Hitler’s persecution of the Jews to create a darkness-to-light traversal. The BSO and its former conductor (2002-2008) were on fine form, despite the reduction of string tone. Alsop’s muscular direction underlined the first movement’s strenuous rhetoric, its melodic angularities unusually pronounced at this measured tempo, so too the music’s limited material. There followed an intoxicating Scherzo with plenty of bite, although the melodic pre-echoes of West Side Story needed greater projection. Uninhibited brass and timpani more than compensated however, Alsop creating a rollicking Bar Mitzvah. In the Finale Michele DeYoung’s expansive Wagnerian tones all but obliterated the verses from the Book of Lamentations, its catalogue of woes indistinct despite fervent delivery if eloquently expressed by the consoling warmth of the strings.

Following the interval, three of Bach’s Motets provided insight into this music’s drama and complexity, written after he had settled in Leipzig. If, at times, the performances sounded a little effortful (this repertoire is mostly outside the daily service) each choir sang with hearty conviction, alert to its respective conductor – Andrew Lumsden, David Halls and Charles Harrison – and wonderfully responsive to the music’s ebb and flow.

Back to Bernstein for a bang-on-the-money account of Chichester Psalms in which Alsop fashioned a sizzling Psalm 100 (“Make a joyful noise”), its 7/4 rhythms bouncing off the page; and what a bracing tempo she set! Jago Brazier (a Chichester chorister) was of assurance, clarity and musicianship, with just the right degree of tenderness, for “The Lord is my shepherd”, and “Why do the nations rage” was as secure as I’ve ever heard it. The strings’ opening to the final movement seared with intensity, and then Alsop encouraged the choirs to be unashamedly romantic in Psalm 133’s life-affirming sentiments. As an encore we heard yet another side of Bernstein’s genius, the closing number from Candide, “Make our garden grow”.