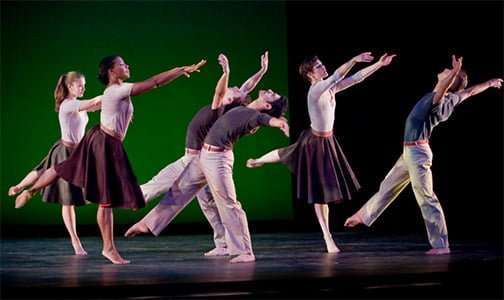 This second of Mark Morris dance was more satisfying than the first. In it, Morris succeeded in showing us an even greater variety of his work, From the lightweight, almost throw-away A Wooden Tree and the intensely American Excursions through the impassioned Jenn and Spencer duet to the joyous, uplifting Festival Dance. It made for an exhilarating evening of dance, unfettered by the modernist anxieties of most choreographers and genuinely, unambiguously enjoyable.

Under-pinning it all is Morris’s extraordinary musical taste which here encompasses Hummel, Barber, Henry Cowell and the surreal poetry and songs of Ivor Cutler. With this voracious and wide-ranging musical appetite, Morris feeds his creativity and thereby produces a torrent of invention where others content themselves with a trickle. What is an added pleasure is that Morris has the confidence to set small-scale works rather than orchestral compositions; it makes for an intimate artistic experience and, here, allows the audience to savour the playing of some highly talented young musicians – all three live performances were superlative.

Samuel Barber’s Excursions provides a spring-board for a dance work of an intense American character, the selection chosen allowing 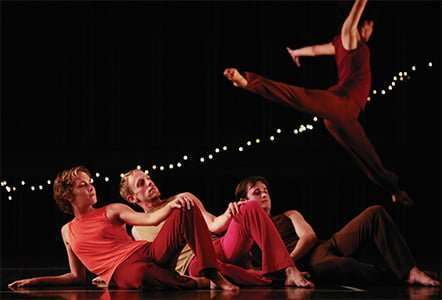 Morris to conjure up dance vignettes which evoke rodeo, the chain-gang and the cruel bustle of the city. As ever, the touch is deft, the allusions fleeting, the invention unflagging. With the dancers clad in costumes evocative of the 1950s, movement is wide-ranging, tending to the vernacular.

It would be easy to dismiss A Wooden Tree as mere whimsy, and there are laughs a-plenty both from the recordings of Ivor Cutler speaking and playing and singing his songs. They are short, often surreal compositions in naive language but every now and again they contain an observation on a detail of human existence which makes one sit up and think. Again, Morris illustrates with his dance, eschewing literalism but evoking or hinting at meaning. The cast transmit a joyous, almost childish glee in this work.

Jenn and Spencer is a multi-section duet for two company dancers Jenn Weddel and Spencer Ramirez. They are strong artists, and they relish the chance to convey a variety of moods which characterise their ‘relationship’. Perhaps the most striking section is the first: the two circle each other, coming ever closer and then breaking apart, the mood tense, angry almost. There follow further explorations of their partnership, but none for me reached the same level of insight. In no other work of this short season, however, have I been so struck by how Morris choreographs for the whole body, not just legs and arms, but for each and every part of the dancer.

Festival Dance is one of Morris’s joyous ensemble pieces, works which fill an audience with elation. This work also reveals Morris’s deep mastery of the stage, as he interweaves his dancers, making full use of the stage and fully confident in getting his dancers both on and off (not as easy as one might think). As throughout the programme Morris is served by a deeply committed ensemble of dancers who are entirely at ease in his dance idiom, and has chosen an engaging composition – Hummel’s infectious creativity – played with élan by superlative musicians.