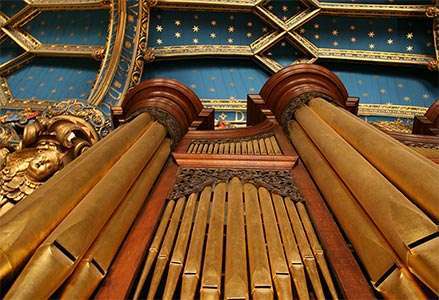 The list of great musicians who have worked in the Chapel Royal of Hampton Court Palace includes the sixteenth-century composers Thomas Tallis, William Byrd, Thomas Morley, Orlando Gibbons, Pelham Humphrey (Humfrey, Humphry) and John Blow. By the end of the next century the Chapel’s organ was known as “Purcell’s Pipes”, after Henry of that name, who became organist in 1682. The Chapel has been justly described as “the cradle of English church music.” The existing organ was built by Christopher Schrider in 1710, and underwent various modifications and restoration during the nineteenth century. During the last year Harrison & Harrison has undertaken work not only to overhaul the instrument once more, but to restore its original character and timbre, which had become very much changed.

The Chapel’s current Director of Music, Carl Jackson, himself a virtuoso organist, modestly stepped aside for this inaugural recital on the restored instrument, which was given by James O’Donnell, Organist and Master of the Choristers of Westminster Abbey. Though the organ is fairly small compared with those of most English cathedrals, it is a resourceful instrument, especially now, and O’Donnell’s programme was well chosen to display its many virtues. 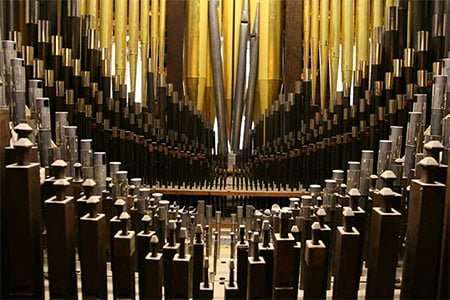 The seven-minute opening movement of the Sonata in G minor by the Danish nineteenth-century composer J. P. E. Hartmann began the recital and was something of a revelation in the bold, confident and individual nature of its invention. O’Donnell ensured that it made an arresting start to the evening through his buoyant and crystal-clear playing, which made one curious to hear the whole work. The need for pieces of manageable length meant that we also only heard the first movement of Felix Mendelssohn’s Sonata in A, somewhat atypical of him in its heavy timbres and strong, serious vein of expression. Handel’s Concerto in F, a four-movement arrangement of a Sonata for Recorder and Harpsichord, was however played in its entirety. Here, as throughout, O’Donnell’s playing was notable for its springy, rhythmic quality – a characteristic that is not common to all those who perform on the King of Instruments.

Variety was provided by Frank Bridge’s early, dark-hued Adagio in E, two charming short pieces by the eighteenth-century composer’s Maurice Greene and William Boyce, and the longest work of the recital – Maurice Duruflé’s eloquent tribute to a prematurely deceased colleague. O’Donnell sailed nonchalantly through this work’s many technically challenging passages, and he even made the English instrument sound almost Gallic in nature. The bright, outgoing cheerfulness of the J. S. Bach/Marcel Dupré Sinfonia was followed by an encore, another arrangement from a Bach Cantata, this time the opening chorus of BWV140, ‘Wachet auf’. As O’Donnell remarked in a brief address, it was a very suitable piece to mark the approach of Advent.

The recital was given in aid of the Choral Foundation, whose aim is to ensure that the rich tradition of such music in the Chapel Royal at Hampton Court is preserved for the benefit of present and future generations.