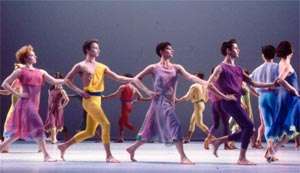 It may seem strange to begin a dance review with words about the musical performance, but in this case, Mark Morris’s choreography is so deeply intertwined with Handel’s composition that it seems apt.

This is a version of the work that has, apparently, been “re-arranged” by Charles Jennens, one suspects in the ordering of the ‘numbers’ more than in any other fashion. Jane Glover led a highly idiomatic performance, and, after some distinctly out-of-tune violins in the opening section, English National Opera’s Orchestra settled down to some fine playing, not least from the flautist who featured so prominently in ‘Sweet bird, that shun’st the noise of folly’ (one assumes that it was Alan Baker from the list of orchestral players).

There was a fine and muscular contribution from the New London Chamber Choir. In regards to the soloists, both sopranos soared and floated with ease, although words were largely lost in their singing, and Mark Foster-Williams made some forthright declarations. Mark Padmore, fine musician that he is, does not possess the sweetness of tone I find pleasing in the tenor voice. 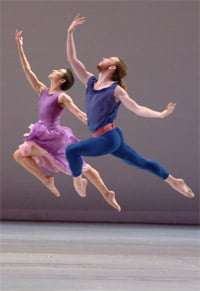 The words… and there lies the rub. The text of this work is by Milton and therefore needs to be heard, especially when Morris has clearly taken it as a springboard as much as he has Handel’s music; surtitles might not have been a bad idea in fact, as, when fragments of text were caught, it was clear that the choreographer was in some way evoking them in his movement.

And here is my problem with Morris. Firstly, let me say that “L’Allegro, Il Penseroso, ed il Moderato” is widely acknowledged as a superb work, intensely musical, life-affirming and, in general terms, a panacea for all the ills of the world. I don’t quite subscribe to that view and one reason lies in the relationship between Morris’s movements and the text – they are often too facile.

In Part the First, ‘Let me wander, not unseen / By the hedgerow elms, on hillocks green’ is cleverly accompanied by dancers pretending to be trees, bushes, hunting dogs (with requisite cocking of legs), and hunters on horses. Clever, charming, amusing, yes, but anything more than a superficial reaction to Milton’s words? I think not. Words are evoked in poses, movements, groupings, but it goes no further than that – witty evocations (and Morris is a witty choreographer, of that there is no doubt) but nothing deeper than that. 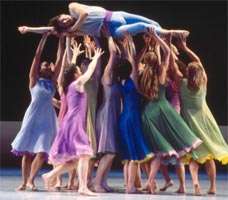 The movement palette for the 24 barefoot dancers (12 of each sex) is that of folksy, modern dance. Morris is fond of the grand gesture and what is now quaintly described as ‘striking an attitude’ or ‘pose’. Many of his choreographic thoughts are felicitous – the dancers fill the stage, move as one, make the most basic of movements such as walking or forming a circle things of real beauty.

Morris is strongest in the ‘Allegro’ sections where his bouncy, open style suits the music best – he is second to none in his use of the stage, of entrances and exits, of pattern; these attributes are, however, less of a perfect fit with anything ‘Penseroso’ when they can appear glib or even lose their connection with the music. His musicality is a basic one, responding to the rhythms in the score and rarely laying movement across them, illuminating a ‘hidden’ rhythm or even juxtaposing two contrasting rhythms for specific effect, which is a talent admittedly displayed by only the very top flight of choreographers.

The work looks ravishing in Adrianne Lobel’s set of ever-rising, falling and combining gauzes which glow with colour from James F. Ingalis’s virtuosic lighting; they allow Morris to create half-worlds behind scrims for movement in front to be mirrored or set in counter-point. It is like an ever-changing Rothko painting – blocks of colour and light which coalesce to shimmer with energy and life. Alas, the costumes flatter the women (knee-length, sleeveless, floaty dresses in an assortment of colours) more than the men (baggy chiffon tops and tights which emphasise that Morris’s dancers are not ballet thoroughbreds but chosen for qualities other than physical perfection).

I am, I know, one of a few voices in the wilderness for daring to question the genius of this work. It is good, very good even, but is not the life-changing experience some would have it be. Mark Morris is a highly talented man of the theatre and “L’Allegro, Il Penseroso, ed il Moderato” is one of his most popular and successful creations. It shows his command of the stage and his natural, open dance style which often delights; however, the work’s inability to measure up fully to both music and text also shows where his limitations ultimately lie.