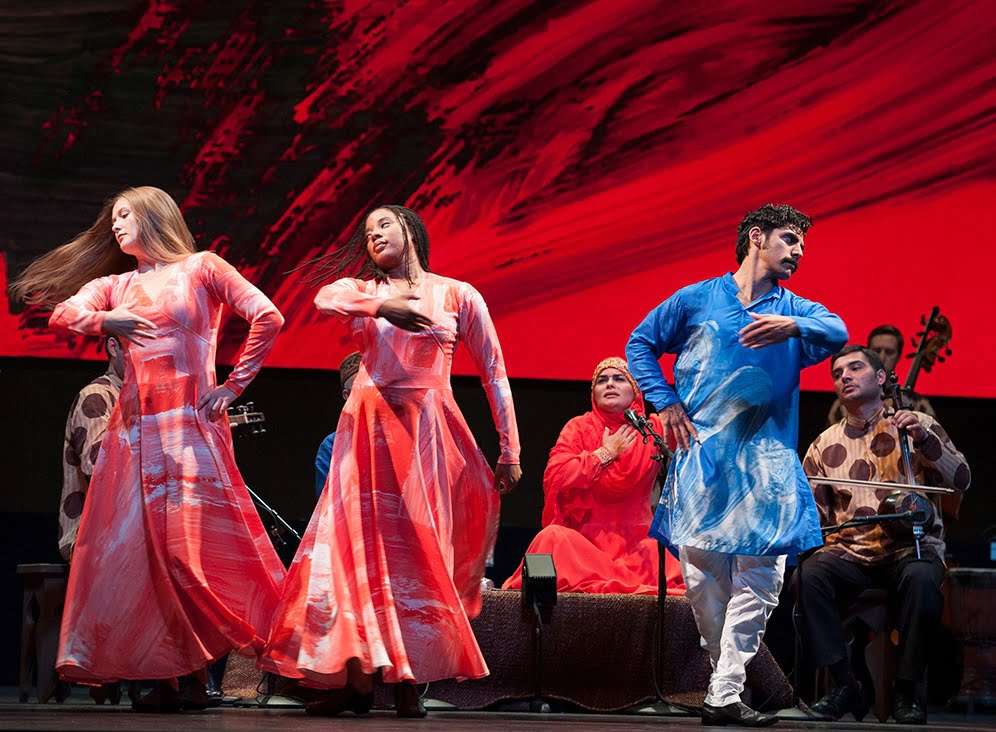 Mark Morris stands as one of the great current dance creators, a choreographer with an artistic field of vision of extraordinary breadth and displaying uncommon musicality. His creativity is fired by a myriad of influences, and his choice of subject matter remains ever-surprising, the product of the most catholic of aesthetic tastes. And so it proves with his latest presentation at Sadler’s Wells after an absence from the UK of over five years: Layla and Majnun is an old story of unfulfilled love from the Middle East and Central Asia, dating back centuries. Morris has sought to fuse many elements – his own modern dance, the vibrant technicolour backcloth and costumes by the late Howard Hodgkin and an arrangement of Uzeyir Hajbeyli’s opera – the first Azerbaijani opera, in fact – in a musical arrangement played and sung live by Yo-Yo Ma’s Silkroad Ensemble and two stars of Azerbaijani mugham singing. It is meant to be a fusion, a conscious amalgam of East and West, and is a daring project that only Morris, perhaps would attempt and, for the most part, bring off.

The narrative of the love story is distilled down to its essence so that for its five ‘acts’, greatest meaning is derived from the singing and the helpful surtitles. Morris takes the couple of Layla and Majnun and, prism-like, refracts them into several dancers – we get four of each, although the whole cast are similarly dressed: blue kurta and white trousers for the men, orange-pink long dress for the woman, with the only indication of who ‘is’ the protagonist a scarf around their necks. The colouring is also echoed by the outfits of the two singers, the famed Alim Qasimov and his daughter Fargana Qasimova. 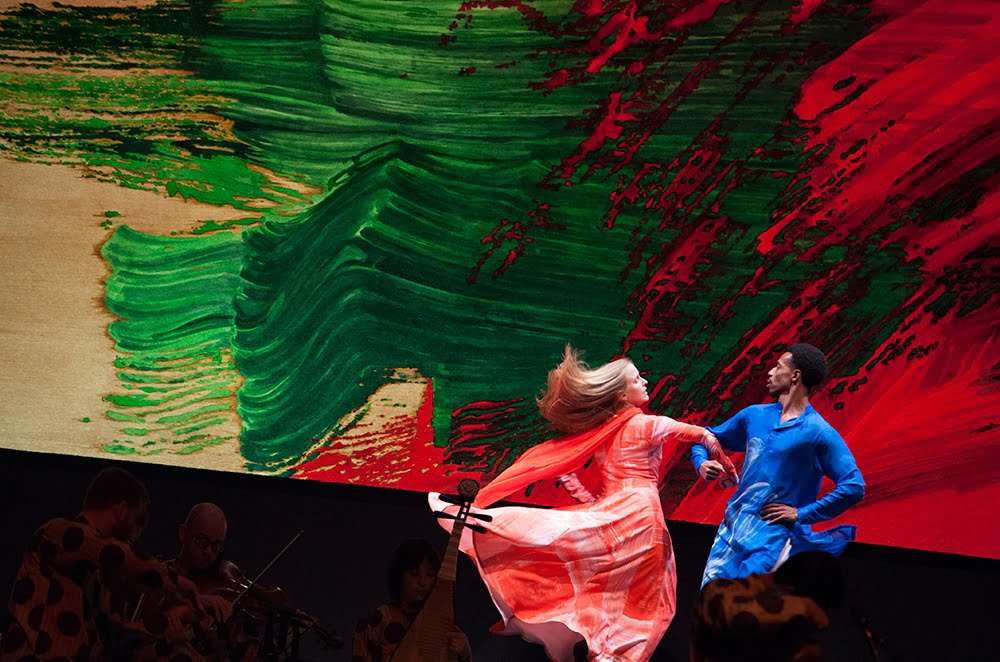 What takes place is, therefore, an evocation of the story, and for that Morris uses a panoply of movements, often as delicate and subtle as it can be broad and emphatic. Ballet, dervish, modern and ethnic elements are fused in what is almost always a satisfying brew, underpinned by Morris’s undimmed musicality, which is, as ever, the spicing that lifts his choreographic dish. Morris has an eye for detail, and often he will use a simple sequence of steps or even gestures which, when repeated, take on a weight of their own. His dancers are entirely in the idiom, alive to the smallest detail and fused together in a tight ensemble of individuals – Morris has always gone for character rather than uniformity. If any one dancer stood out, it was handsome Domingo Estrada, Jnr who possesses both a striking movement quality and a pleasing line and was Majnun in Act Two, ‘The Parents’ Disapproval’. The dancers move about the tiered set, and around and among the musicians placed centre in an artistic fusion of no little impact; this does lead to some obscuring of the movement, as, at times, there are, quite simply bodies obscuring total sight of the dancers.

The musicians; what musicians. Ma’s Silk Road Ensemble effortlessly straddles East and West and creates harmony in this arrangement of elements from the original opera, while central to the concept (and in large part responsible for it) is singer Alim Qasimov and his daughter Fargana. Both possess voices of quite mesmeric quality, his, in its upper register (most favoured in mugham) of the utmost purity in tone. Mugham is a long tradition of vocalising, instantly recognisable by its long, decorated vocal lines and plaintive delivery; both singers are superlative exponents of their art.

And there lies the rub. The music, starting with a 15-minute musical introduction (with two different singers), then passing to the contributions of Silkroad and the Qasimovs is dominant, an impression emphasised by their occupying the very centre of the stage, and there are moments when Morris’s dancers simply cannot compete. Time and time again, as attention is drawn to exquisite instrumental and vocal lines the choreography slips into the role of accompaniment. It is often beautiful, but lacking in inner meaning – that is provided by the music – with the dancers’ faces impassive. At times it flares up into something greater, as in Act Four, ‘Layla’s Unwanted Wedding’ where Majnun and his beloved’s designated groom compete for her, but such moments are few. It is this general disparity between the dance movement and the musical performance which ultimately robs Layla and Majnun of true greatness.