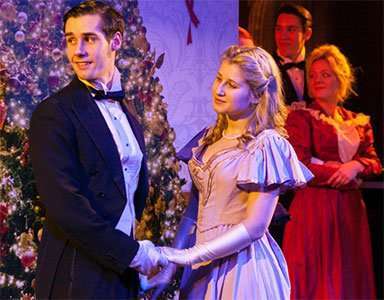 Vincente Minnelli’s 1944 film Meet Me in St Louis was and remains the perfect musical film. It was made with the utmost love and care and that shows in every frame. It also has an appealing plot with which every member of the family can identify. Set in 1904 at the time of the impending World’s Fair in St Louis, it details the lives and loves of the members of the Smiths, a middle-class American family, in a screenplay based on a series of stories by Sally Benson, originally called 5135 Kensington, the house and avenue where the family lives.

There are four daughters and a son. Rose, the eldest, is hoping for a proposal from her young man, Warren Sheffield. Esther is in love with her neighbours’ son, John Truett, – “the boy next door” of the famous song. The two youngest girls, Agnes and Tootie, are prone to practical jokes. Tootie, a lugubrious fantasist about death, is a particularly naughty little mite. In the film the four girls were brought delightfully to life by Lucille Bremer, Judy Garland, Joan Carroll and the diminutive Margaret O’Brien, who won everybody’s heart.

Apart from worrying about their love lives, not very much interferes with the Smiths’ existence until father declares he is being sent to New York by his employers and that the family will have to follow suit. This is devastating news for the girls who will miss not only their boyfriends but also the World’s Fair. For Tootie it means that she will have to take all her dolls with her, “including the dead ones”. 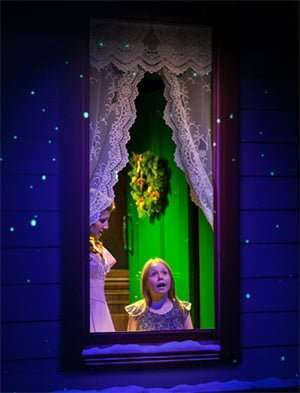 The Blane & Martin songs are particularly fine and the score produced several standards including ‘The trolley song’, ‘The boy next door’ and ‘Have yourself a merry little Christmas’. They also interpolated traditional ditties such as ‘Skip to my Lou’, ‘Little brown jug’, ‘Auld lang syne’, ‘Home! sweet home!’, ‘The first Noël’ and ‘Down at the Old Bull and Bush’, and of course the title song, which all went to create a homely, folksy feel. The whole thing is a real delight and it’s no wonder that the film was such an enormous success, garnering nine Oscar nominations.

Turning a film musical into a stage show has its problems, as many have discovered. Luckily Blane and Martin were involved. They wrote some additional songs and re-wrote the piece to take the spotlight away from the character of Esther (Judy Garland). The show – with George Hearn, Milo O’Shea, Charlotte Moore and Betty Garrett – hit Broadway in 1989 but only ran for just over 250 performances. It has had revivals: off Broadway in 2006, at the Paper Mill Playhouse in New Jersey in 2007 and in St Louis itself in 2009. It now receives its UK premiere production at the ever-enterprising Landor Theatre.

The staging reminds one of the film and reproduces the needlepoint pictures that appear at the beginning of each change of scene. It evokes turn-of-the-century America very well in the settings and costume designs by Francisco Rodriguez-Weil. If some of the new songs (‘Whenever I’m with you’, ‘You’ll hear a bell’, ‘A raving beauty’) do not bear comparison with the originals, they still help to move the story along. Robert McWhir gets some really charming performances. As Mr Smith, Bryan Kennedy shows how frustratingly impossible it can be living with an almost all-female family, including Katie the Irish cook. He blusters about but eventually gives in to them. As Mrs Smith Nova Skipp is the steady hand on the family tiller, and she gives a nicely contained performance. Rose (Emily Jefferys) is the excitable one who cannot wait for a marriage proposal, the only thing she really wants. As Esther, Georgia Permutt, making her professional debut, gives a marvellously confident rendition as she yearns for the boy next door. She also gets to sing ‘The trolley song’ which is very neatly choreographed by Robbie O’Reilly.

Terri O’Ryan as Katie (standing in for Carolyn Allen) makes a very good cook with ‘A touch of the Irish’, a sort of knees-up number to open the second Act. The show could not have found someone more like Margaret O’Brien than little Rebecca Barry, a young showbiz veteran already, who is a marvellously knowing Tootie and makes her totally believable and quite loveable. If Annie ever gets revived again, Rebecca should be straight in there. The other members of the cast acquit themselves very well and there is some splendidly lively movement on the Landor’s relatively small stage. The piece really does exude pizzazz in a show that has ‘Christmas treat’ written all over it.