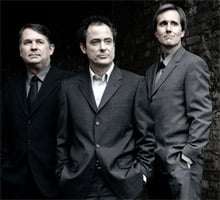 With cellist David Finckel suffering injury, the Emerson Quartet radically rethought its current European tour, jettisoning programmes at extremely short notice. Sensibly, rather than asking a guest to replace Finckel for quartet-playing, the remaining members turned this difficult situation to their advantage.

This programme’s first half comprised works by European composers all of whom had strong American connections although only Martinů’s Madrigals were written in the States (for the brother-and-sister duo Joseph and Lillian Fuchs). Ironically, whereas Dvořák was profoundly influenced by his visit to America, Martinů continued to compose in an unmistakably Czech idiom. His Madrigals are a compound of influences – notably Bach, Bartók and Dvořák; only in the last of the three – a syncopated, life-affirming Allegro – does one really feel that we are in the New World. This is unfairly neglected music that was wonderfully performed by Philip Setzer and Lawrence Dutton with spot-on intonation and relish.

Equally impressive was the selection of Bartók’s (44) Duos, adapted from Hungarian, Slovak, Romanian, Serbian, Ruthenian and even Arab folksongs. Eugene Drucker and Setzer did best with the more introverted and melancholic pieces. Elsewhere a little-more earthy vigour would have been welcome.

Dvořák’s Terzetto, for two violins and viola, a substantial but undemanding three-movement piece, acted as an agreeable foil to gritty Martinů and sombre Bartók.

However, the real highlight was the best performance it has been my privilege to hear of Shostakovich’s Piano Quintet for which Elisabeth Leonskaja, much admired by Sviatoslav Richter, and Ralph Kirshbaum joined the Emerson ‘trio’.

With its neo-baroque textures (much of the piano-writing is in non-harmonised octaves) the Piano Quintet can emerge as a rather brittle work. Written in 1940, it inhabits a similar world to the Fifth Symphony. Here it emerged with an emotional weight one seldom encounters, its more glacial moments absolutely chilling with the central scherzo, taken moderately, akin to being slapped across the face with a wet towel. This was magisterial music-making of the highest seriousness, Leonskaja unobtrusively leading from behind (as it were) and invariably finding a riveting variety of touch even in the most simple of passages. Such gravitas and certainty of direction left one in no doubt that this is one of Shostakovich’s very greatest works.

The scherzo was played again as an encore, which was quite unnecessary as the point had already been adequately made.