Merman at the Jermyn: a 100th-birthday tribute to Ethel Merman 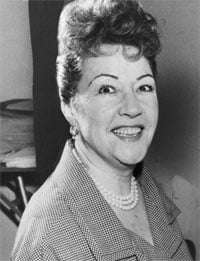 In January this year the centenary of Broadway’s greatest singer, Ethel Merman, was celebrated at the Jermyn Street Theatre by a young actor-singer called Dominic Mattos. I don’t know whether any other organisation marked the occasion, seeing that the great lady herself seemed to be in doubt about the true year of her birth. Most sources say 16 January 1908, but some others say 1909. Who to believe? If it is 1909 then we can celebrate all over again and remember that next February 15 it will be the silver anniversary of the diva’s death. In an interview in the 1970s Merman herself admitted to being born in 1912 so, as Dominic Mattos says in his Jermyn Street programme note: “This presents a valuable opportunity for 100th birthday tributes in 2009, 2010, 2011 and 2012. Perhaps Ethel can help open the Olympics – she could sing a charming duet with Boris!”

When Mattos presented his Merman tribute in January it was a sell-out and he had to give a repeat performance in February – another sell-out. This week I finally managed to catch up with his performance. I recently interviewed the world’s champion Elvis impersonator without knowing why Presley still has such a fanatical following but, having now seen Dominic Mattos as Ethel Merman, I now finally understand the attraction of seeing a ‘tribute artist’ when, for 25 years, you haven’t been able to watch the real thing unless you catch an old movie.

Essentially a musical theatre artist, Ethel Merman was never really that well served by the cinema, although she appeared in many films. However, her best stage performance as Mama Rose in “Gypsy” went to Rosalind Russell when Hollywood got its hands on it. Russell’s husband bought the film rights for his wife. Earlier she didn’t get to do the 1950 MGM film version of “Annie Get Your Gun” which Irving Berlin wrote for her (she did make a TV version in 1967). Judy Garland started the picture and then Betty Hutton took over. Admittedly Ethel got to play Sally Adams in the film version of her Broadway hit, Irving Berlin’s “Call me Madam”, and earlier in her career she was in the film of Cole Porter’s “Anything Goes”.

Dominic Mattos, the 23-year-old former theology graduate who now works in publishing, is also an actor, a professional voice-over artist and freelance writer. As an actor he is accustomed to cross-dressing, having been Dame-in-Residence for the Oxford University Light Entertainment Society and performed as Cinderella’s Stepmother in Sondheim’s “Into the Woods”. He also does what he calls a one-man sit-down comedy act. For his Merman performance he assumes the persona of Ethel returning at age 100 to a small basement theatre in the West End of London to give us a trip down the memory lane of her life and the songs she made famous. She seems only to have worked for the best, the Gershwins, Cole Porter, Irving Berlin, Jule Styne and Stephen Sondheim – so her repertoire includes some of the best songs ever written and she got to sing them first.

Much has been said about Ethel Merman’s voice. Generally speaking it didn’t need amplification. The conductor Arturo Toscanini once said it was “not the voice of a human being”, music writer Stanley Green called her “a gutsy dame whose heart of gold is revealed through a voice of brass”, and critic Kenneth Tynan called her “the most relaxed brass section on earth”. Ethel could belt out a number so that every last member of the audience could hear her. This, seemingly, is exactly what Dominic Mattos can do as he throws out song after song in a full alto voice that is definitely not falsetto. His is no Tiny Tim soundalike voice but the real Merman ‘bash’ that hits you over the head. Nobody ever slept while Ethel was on and for her subtlety was not the name of the game.

Dominic enters in a signature loud dress as Merman with big hair to go with the big voice and then goes through her repertoire plus a couple of songs that she never sang, including ‘What I did for love’ from “A Chorus Line” and ‘Good Morning Baltimore’ from “Hairspray”. Ethel would have made an ideal Edna Turnblad, but she was the wrong sex for the “Hairspray” part as it’s always played by a man. (Maybe Mattos has it in mind.) In her first Broadway show, “Girl Crazy” (1930), by George and Ira Gershwin who offered to change the songs if she didn’t like them, Ethel sang ‘I got rhythm’, the beginning of a beautiful relationship with Broadway that gave her five shows by Cole Porter and two by Irving Berlin. Dominic sings most of her most celebrated numbers including ‘You’re the top’, ‘I get a kick out of you’, ‘Let’s be buddies’, ‘Make it another old-fashioned, please’, ‘They say it’s wonderful’, ‘You can’t get a man with a gun’ and ‘There’s no business like show business’. He performs them with all the style of the singer herself, the waving arms, the full-throated belting voice and the attitude of a real star diva.

There’s also Merman’s famous medley of songs featured by all those wonderful broads she played “who were cast in a similar mould”, a medley originally compiled for her by Roger Edens. Matthew Floyd, Dominic’s accompanist, has recreated the medley that has not been performed here since Merman’s last visit to the UK in the early 1980s. We also get to hear ‘World, take me back’, one of the two songs from “Hello, Dolly!”, that Jerry Herman wrote for Merman. Ethel didn’t do the original show until the end of its run. Who knows what would have happened had she done “Hello, Dolly!” first. Would she have then got the film instead of Streisand?

Dominic also sings ‘It’s today’ from Jerry Herman’s “Mame”, a part Ethel could well have done, but she was really at her best as an actress in “Gypsy”, written for her by Styne and Sondheim. Dominic demonstrates how, even in a ballad such as ‘Small world’, Ethel tended to shout it out. He also performs ‘Everything’s coming up roses’ and, apparently, Ethel’s favourite song from the show, ‘Some people’. This Merman tribute as a whole is fairly tongue in cheek as a performance but it does remind us just how good Ethel Merman was and that there has never been anybody to replace her. It also shows that Dominic Mattos is a star in his own right. If you missed his Merman show third time around, it’s due to go to the Aldeburgh and Edinburgh Festivals and may well return to Jermyn Street. Failing that, you can book the show for your own party!