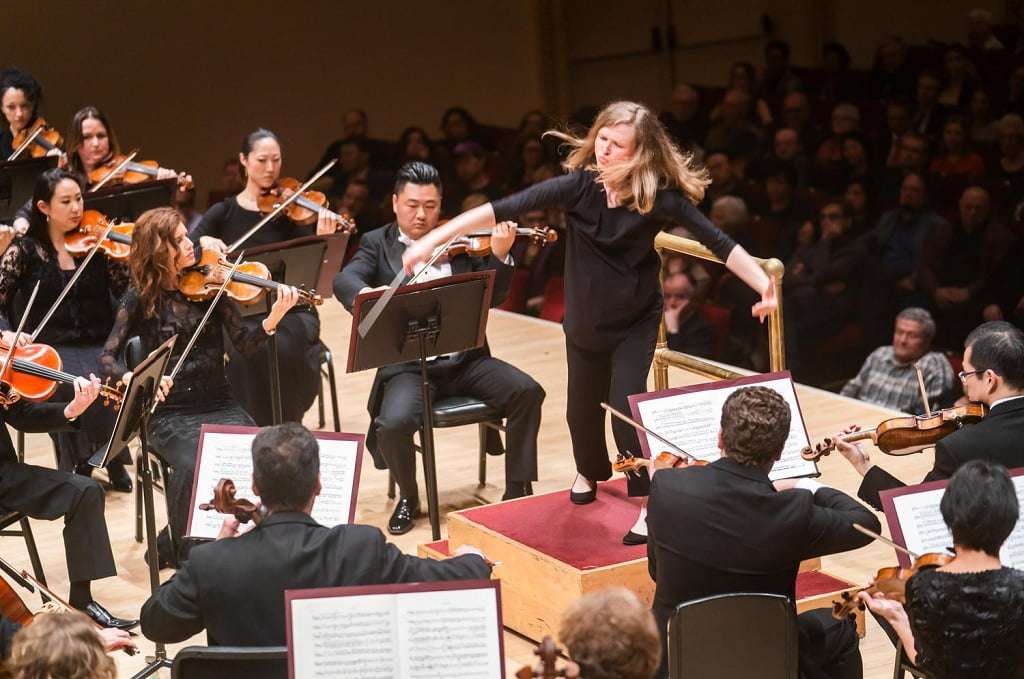 MET Orchestra concerts at Carnegie Hall usually fill up the house, so I was surprised to see a fair number of empty seats. Perhaps Mirga Gražinytė-Tyla is not yet a familiar name to New York audiences, or it may be that the ongoing, headline-making legal battle between the Metropolitan Opera and James Levine is keeping concertgoers away. In any case, I hadn’t yet had the opportunity to hear the City of Birmingham Symphony Orchestra’s newish music director in performance, and was eager to see what the fuss is about.

Playing Debussy’s Prélude à l’après-midi d’un faune in New York City is always a bold move, given how noisy audiences here can be, and particularly when the work is placed at the beginning of a program. But Gražinytė-Tyla held the listeners’ rapt attention. The opening flute solo – played softly and supplely by Seth Morris – emerged from the ether, setting the tone. Gražinytė-Tyla drew delicate, diaphanous sounds from the MET Orchestra, scrupulously adhering to the composer’s dynamic markings so that the single fortissimo in the score was – as it should be – the sole, short-lived moment of full-throated rapture. Her reading conveyed a vivid sense of three-dimensional space and motion, too. Smooth, graceful phrases were juxtaposed with jittery, angular gestures. Conductors have a tendency to micromanage this slender yet intricately detailed score, but Gražinytė-Tyla wisely resisted the urge to pull on the reins at every ecstatic cadence. As a result, her Faun had a fragile grace that embodied the essential spirit of this elusive music.

Curiously, Gražinytė-Tyla took a similar approach to Shostakovich’s orchestration of Mussorgsky’s Songs and Dances of Death. This music is bleak, sharp-edged, and ink-black, but here it was painted in mostly muted colors with broad strokes and a surprisingly soft brush. This fitted with Anita Rachvelishvili’s understated reading, however, as she sacrificed much of the music’s dramatic bite to emphasize its lyrical, intimate qualities. In all four settings, much of the vocal line rests on single, repeated notes, requiring the singer to bring all their narrative and illustrative resources to bear. But in ‘Lullaby’ there was insufficient differentiation in the desperate dialogue between the mother and death. And where were the dark Mahlerian reflections in ‘Serenade’, or the bitter irony in ‘Trepak’? Rachvelishvili sang prettily but blandly, springing to life only in the opening of ‘The Field Marshal’, which was neither as grisly nor as terrifying as music and text demand.

After intermission came Tchaikovsky’s Fourth. As Gražinytė-Tyla stepped out of the wings and walked to the podium, I was struck by how she took her time, as if on a leisurely stroll – a detail worth mentioning only because her conducting of this Symphony was so strikingly eccentric. 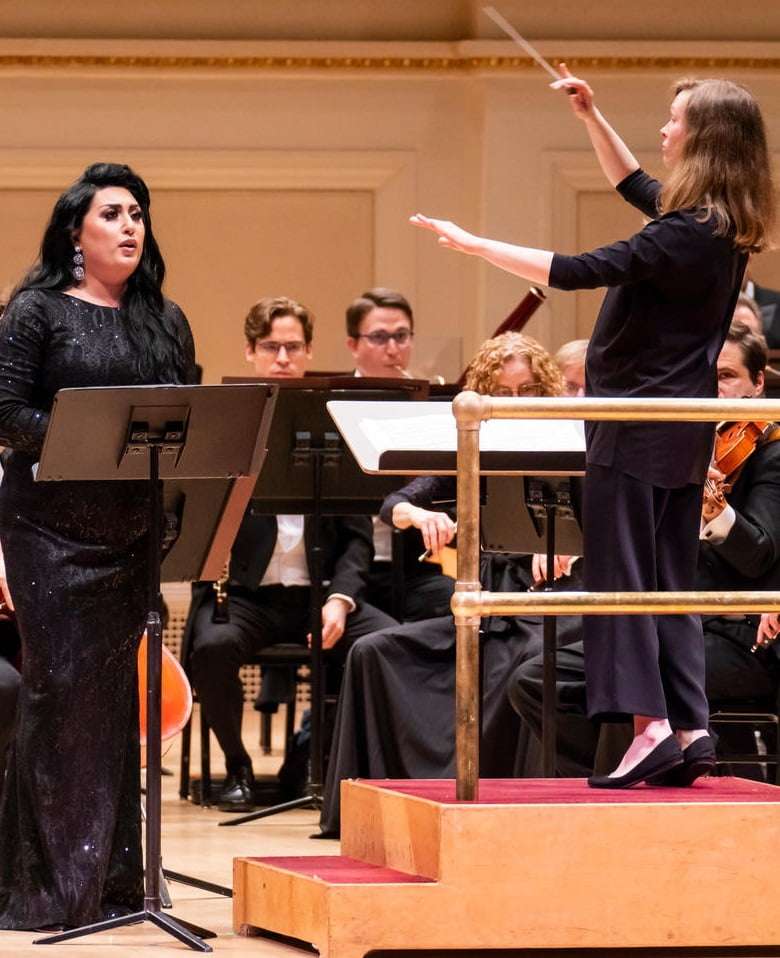 The quirkiness of her interpretation was made manifest from the opening fanfare with the trombones’ entrance on the descending scale. Gražinytė-Tyla had them play this in a smeary legato, although no slur is marked in the score – and, in fact, throughout the movement, favored smooth, gluey articulation. In the transition to the main theme, she began to ease the tempo long before the ritenuto designation (three bars before the Moderato), so that the music became nearly comatose. The Moderato con anima itself had little sense of dance about it, despite Tchaikovsky noting that it’s in movimento di Valse, and nearly everything that’s interesting about the music – the breathless syncopations, and rhythmic/metric restlessness – was meticulously ironed out. Sadly, the feeling of weight and dullness only increased as the movement progressed. Rhythms slackened, and in their efforts to find a pulse, the MET players audibly struggled to maintain their usual precision. So many of Tchaikovsky’s markings were ignored or blatantly contradicted, and for reasons I couldn’t fathom. There were abrupt tempo changes that made the movement’s solidly constructed structure feel disorientingly episodic. In the coda, which has the potential to be both thrilling and cathartic, her insistence on sculpting smoothly unvariegated legato lines sucked the lifeblood from the music; it sounded monolithic, marmoreal.

Gražinytė-Tyla began the second-movement Andantino at a clip so brisk that the oboist’s phrasing became breathless. Never mind that Tchaikovsky described this opening as “the melancholy feeling that suffuses you toward evening when you are sitting alone, weary from work”; here, it sounded almost giddy. But by the time the violins entered with their theme, the tempo had slowed to a reasonable pace. And it kept getting slower as Gražinytė-Tyla continually fussed with the articulation and phrasing. By the time we had the bassoon’s final statement of the main tune, he had room to let his gorgeous tone roam free.

The pizzicato Scherzo was taken at what sounded like a rehearsal tempo. I could imagine, say, Beecham taking a daringly slow tempo like this and making hay with it through rhythmic point and inflection, but there was no playfulness here. And this time, Gražinytė-Tyla simply took her sluggish tempo and dug her heels in – her baton became a metronome. She respected the Meno mosso marking for the central section, so it was by necessity even slower. It was, from first note to last, distressingly joyless.

At least the Finale was taken at a proper Allegro. Whether it was con fuoco is open to debate; it moved fast and, as in the Scherzo, the tempo was held in a vice-like grip. The MET Orchestra played with impressive commitment to Gražinytė-Tyla’s dogged direction, although at times I couldn’t help thinking it sounded like an amped-up marching band. She pushed the coda hard. Most of the audience stood and cheered. I honestly wanted to flee Carnegie Hall immediately in search of a stiff drink, but dutifully stayed for the encore – Dreams, a charming miniature for strings by Lithuanian composer Juozas Naujalis (1869-1934), played lovingly. If only Gražinytė-Tyla had let this emotionally straightforward music speak for itself. She more or less did at the beginning, but stretched the tempo out of shape in the final section.

That Gražinytė-Tyla is a major talent, I don’t deny; her performance of the Debussy proved that. But her Tchaikovsky still has me scratching my head.