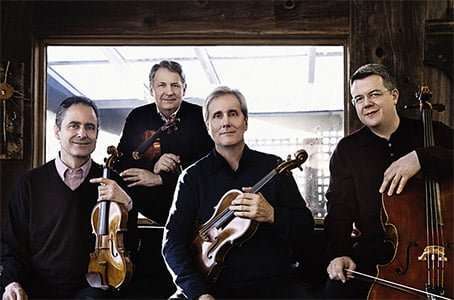 This concert was part of Lincoln Center’s Mostly Mozart Festival, which this year is featuring the music of Beethoven. It was the Emerson String Quartet’s first performance in New York City since Paul Watkins replaced David Finckel in May – the group’s first personnel change since 1979. Watkins, who is about twenty years younger than his new colleagues who have gone gray together, comes to the ensemble with some similar hairs of his own acquired during an illustrious career as a soloist, conductor and chamber musician. His outstanding musicianship and virtuosity were evident throughout these performances, and, maintaining almost constant eye contact with the other players, he seemed to blend seamlessly into this venerable ensemble.

The ‘Eroica’ Symphony was a revolutionary step forward, both in Beethoven’s development as a composer, and taking music itself forward. The ‘Razumovsky’ Quartets, which were composed just two years later, can be viewed as marking a similarly dramatic advance from the classicism of the earlier string quartets and heralding a far richer and more complex future for this chamber-music form, music that is rife with lovely melodies and inventive thematic development and variations, and offering a wide variety of moods, textures and forms.

By presenting all three ‘Razumovsky’ works in a single recital, the Emerson members eschewed the more conventional practice of including only one of these ‘middle’ string quartets. Performed in sequence, the Opus 59 collection made for a relatively long, but immensely satisfying, evening. As is these musicians’ practice, all except the cellist stood and the violinists alternated between the first and second violin parts, with Eugene Drucker taking the lead in the F major and C major works and Philip Setzer doing so in the E minor.

The Emerson players emphasized the contrast in mood between the first two pieces right from their opening passages, Opus 59/1 bubbling along with Watkins’s lyrical cello solo leading the way, and Opus 59/2 starting with strident chords and a pregnant pause before the statement of the main theme, itself interrupted by further pauses. But they also brought out some unifying elements, such as the use of Russian folk melodies – as specified in Beethoven’s commission from Count Razumovsky, the Russian ambassador in Vienna – both in the finale of No.1 and in the scherzo-like Allegretto of No.2, in which both Watkins’s cello and Lawrence Dutton’s viola resonated with particular beauty. In the ensuing finale, Setzer played the tripping theme gracefully, but although the marking is Presto it did not attain that tempo until the final bars – and never got as fast as the C major’s finale, which is marked only Allegro molto.

As the final work began, the tension of its slow, mysterious introduction hung ominously in the air, a five-beat pause feeling even longer, which made Drucker’s Allegro vivace melody seem all the brighter, and his trills and florid runs here stood out, as did Watkins in the Andante, in which the cello plays almost continuously, mostly pizzicato, right up to having the last word. The sweetly melodic Minuet begins almost as a throwback to classicism, but this is belied by the dramatic Trio and harmonically unresolved coda that leads into the finale, with its sequential entries that do not quite become a fugue. This was a virtual whirlwind of virtuosity that never compromised the players’ unity.