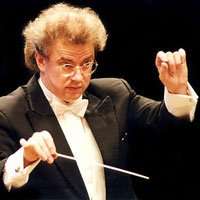 Osmo Vänskä is familiar to classical recording fans – particularly as the conductor of orchestral works by Sibelius – and is about to leave the Lahti Symphony Orchestra to concentrate on his appointment as music director of the Minnesota Orchestra.

Vänskä is also a formidable clarinettist, as was demonstrated in this program’s opening work, Mozart’s Serenade in E flat (for two each of oboe, clarinet, bassoon and horn), written with both gifted amateurs and court-level professionals in mind. The ‘Vänskä Octet’ didn’t play with the polish of, for example, the Netherlands Wind Ensemble (which gave a memorable performance of Mozart’s large-scale B flat Serenade just over a year ago at Princeton University) – but that was not necessarily such a bad thing, in that the individualistic playing yielded animated, engaging music with high contrast and plenty of character. The players also brought a deeper ensemble timbre that is normally associated with this music, the beautifully phrased Adagio and Allegro finale bringing spirited, almost mischievous raucousness more associated with Mozart’s comic operas.

The marquee name for the program was Joshua Bell, soloist in Prokofiev’s Violin Concerto No.1. Completed in 1917 the work is not only influenced by classical models but by the composer’s French contemporaries who were in full backlash against Romantic ‘excess’. This music works best with a small orchestra, and Bell, Vänskä and the players demonstrated remarkable wizardry in a work that is paved with rhythmic landmines and places enormous demands on both soloist and conductor. The non-stop ‘back-and-forth’ between violin and orchestra in the opening Andantino was navigated almost effortlessly, presenting the music’s restless undercurrents in unusual relief. The edgy scherzo is the ‘showpiece’ movement for the soloist, and it was here that Bell used his outstanding range of instrumental color to underline the music’s highly punctuated, propulsive excitement, from the opening flourish to the startling, ambiguous final bar. The Moderato finale contains remarkable interplay between the soloist and wind players, with Bell and the orchestra allowing the music to unfurl compellingly through to the work’s serene coda.

One of Vänskä’s highest-profile projects with the Minnesota Orchestra is recording a Beethoven symphony cycle for BIS. The Mostly Mozart Festival Orchestra is not only a much smaller band but takes a different technical approach to performance, with one foot in the ‘authentic’ camp (for example, far less vibrato from the strings). In the Adagio molto introduction to Beethoven’s First Symphony, the orchestra utilized the sort of crescendo-decrescendo that has become commonplace in ‘authentic’ readings – but in the Allegro, Vänskä called for the same strongly contrasting dynamics, sometimes within a phrase and even from one note to another, that have characterized his Beethoven recordings, and elicited far more aggressive bowing from the orchestra than is common. The players had their eyes on Vänskä from the get-go, responsive to his taut, baton-less direction. This was ‘revolutionary’ as opposed to ‘classical’ Beethoven, with startling attacks and dynamics reminiscent more of Toscanini or Reiner than Gardiner or Harnoncourt, with the finale in particular betraying portents of the Fifth and Seventh Symphonies, bringing the program to a rousing close.