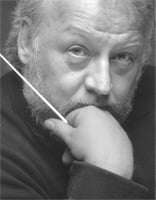 With the indisposition its Music Director, Enoch zu Guttenberg, and the substitution of Heinrich Schiff (with a slight change of programme) as his replacement, this appearance in London may not be the fairest way by which to judge the quality of the rather oddly-named KlangVerwaltung Orchestra of Munich, or perhaps those responsible for the programme book, which contained a number of hair-raising misprints.

Wagner’s Siegfried Idyll was originally billed to open the concert but in the event we had an excellently-structured and generally very well played Coriolan Overture. If some may have felt that Schiff’s basic tempo was a shade fast, the powerful drama which is found throughout the work never failed. The performance clearly demonstrated that the Orchestra is, in essence, a fine one, and we were fortunate to hear it play so well, and with such evident corporate and individual musicianship.

John Lill was fortunate also for conductor and orchestra providing a splendid partnership for his account of Mozart’s D minor Piano Concerto, which was exceptional in every regard. In short, this was a performance of very great distinction by this incomparable artist; a reading that was wholly appreciated by the Orchestra itself. Lill’s phrasing, dynamics and tonal graduations, and his integration of the cadenzas, were beyond praise; but the decision for the strings to play without vibrato tended to produce occasional stylistic clashes of timbre against a modern Steinway instrument, on which Lill showed a consistently wondrous sense of Mozartean characterisation.

Perhaps, in the circumstances, Schubert’s ‘Great’ C major Symphony tended to suffer, but not by much. This was a big-boned, big-gestured account, but the tempos could have been more subtly integrated in the first movement, such as makes all the difference in this composer’s solo piano and chamber-music, although the changes of gear were well managed overall.

This was a powerful and compelling reading in the main, but a greater degree of refinement was missing in stretches of the finale, where Schiff appeared to let the orchestra play by itself on auto-pilot, rather than taking control with a sure sense of direction and ultimate destination. The playing, as such, was at all times very good indeed. It is always fascinating to hear a very fine musician in a different musical role; on this showing, Beethoven and Mozart seemed to suit the conductor (better known as a cellist, of course) more than Schubert.