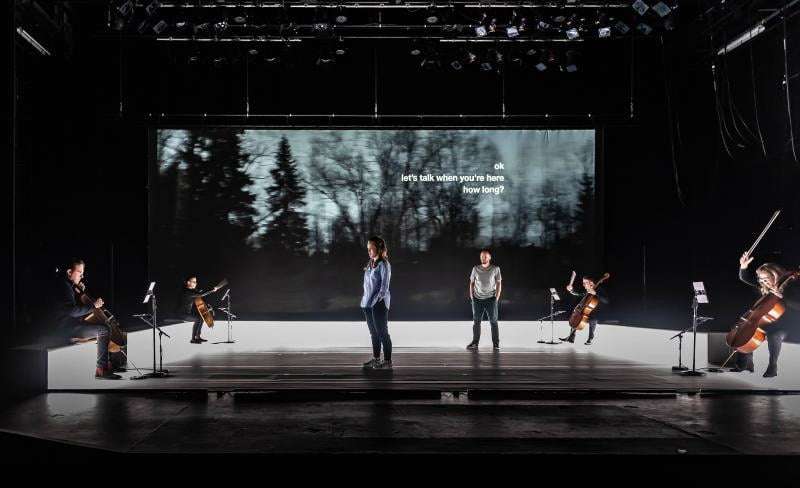 There is a current media trend for true-crime podcasts: Grand Guignol chunks with ‘atmospheric’ piano-heavy mood music, the sort of which has me screaming at the radio. Philip Venables and director and librettist Ted Huffman’s follow-up to their Sarah Kane opera, 4:48 Psychosis seems to grab this phenomenon by the scruff of its neck in Denis & Katya, and Venables provides a score that is much more involving, not least in his inspired choice of containing his palette to just four cellos. They bring a real-life story of teenage tearaways who hole up in a Russian house and are then surrounded by special forces and are killed. Or kill themselves. We don’t know.

It became something of a live internet sensation with people watching the teenagers’ live streaming in November 2016, and the aftermath left so many questions unanswered. Venables and Huffman’s take is inventive and perhaps counter-intuitive. The tale is told by six characters, shared between soprano and baritone: Journalist, Teacher, Neighbour, Friend, Teenager and Medic; but we never see, nor hear, from the fugitives Denis and Katya at all. But there’s an additional gloss to the telling of the tale, in that text messages between composer and director/librettist are displayed, as if being typed in real time, on the large screen behind the white acting area. They become, after the event, part of the story in the discussions about how to create the piece (whether to include the two teenagers, whether to include – if permission was granted – actual footage, and whether to visit the site of the incident etc.). At the corners of the white set sit the four cellists, providing the distinctive timbres that – amidst silent passages – provide the musical motivation of the story. 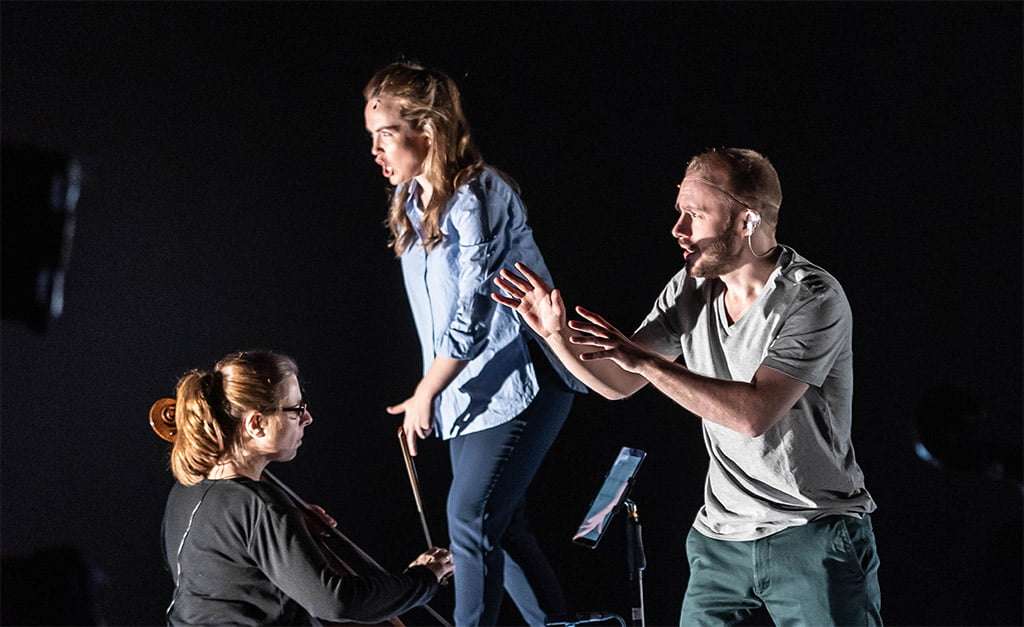 Venables fashions various musical styles, from the buzzing minimalism for all four cellos to accompany the text messaging (enhanced by electronic bleeping), to different treatments for each of the characters, of which the Teacher and Medic are voiced by both singers, while Teenager and Neighbour are sung in Russian by one singer and translated simultaneously by the other. The whole is admirably simple in conception and direct in performance, with Emily Edmonds and Johnny Herford masterly at their changes of character, as well as manipulating a chair each, the only movable part of the set.

This is mesmerising and memorable stuff, and quite rapidly moves to a climax of the police surrounding the house the teenagers have hidden in, in Sturgi Krasnye, before storming it. The music stops and there is an agonising extended silence before suddenly the screen flickers to life with a view of a Russian building. Is it the house in question? We’re never told – but when the picture moves we realise the camera is on a train and we are travelling across the Russian countryside. It’s here that the opera’s coda gives us the aftermath as described by two of the characters – the Friend (Herford) and Journalist (Edmonds) – outlining the unanswered questions – did the teenagers shoot themselves (but no shots are heard on the transmission), or where they the victims of the security force’s enforced entry on the building? Each have to face their own traumas that the siege and deaths throw up and the audience – by this time stunned – are left to their own thoughts.

Very impressively set and performed, fitting beautifully into the Purcell Room, this is a worthy successor to 4:48 Psychosis and marked a winning collaboration between Music Theatre Wales and four cellists from London Sinfonietta. It also, incidentally, boasted the smallest programme I think I’ve ever seen – a mere 8 x 16 cm, about the size of a mobile phone.