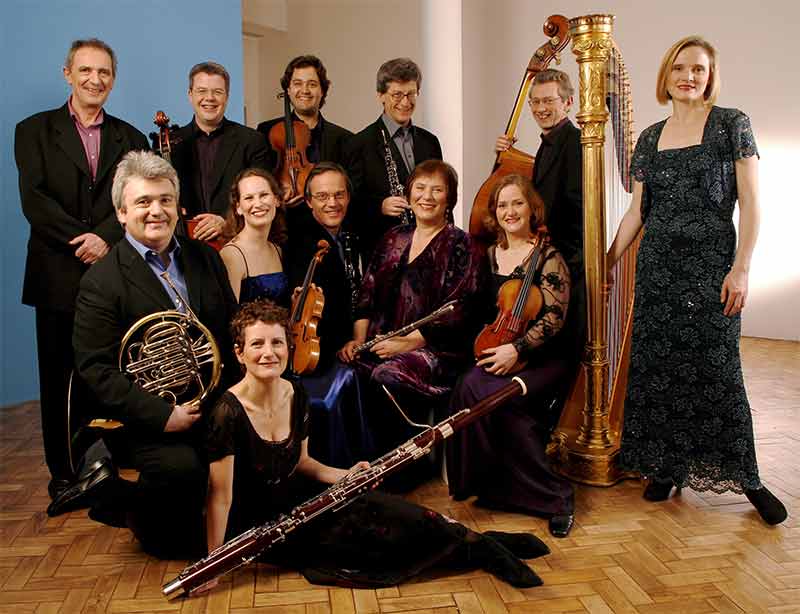 The 6 o’clock recital of this typically wide-ranging Nash Ensemble appearance at its regular haunt of Wigmore Hall returned to three Nash Commissions, Anthony Burton talking to two of the composers. Unfortunately Alexander Goehr was unwell and unable to attend. Nevertheless his … around Stravinsky (2002) opened the evening, scored for violin, oboe, cor anglais (Katie Clemmow), clarinet and bassoon, the same instrumentation that Samuel Dushkin and Stravinsky arranged his delightful Pastorale for. In the absence of the also-unwell Marianne Thorsen, David Alberman (who leads the LSO’s second violins) introduced Goehr’s piece – with his ‘Dushkin’ Prelude – and did so in richly expressive style, gorgeous tone and perfect poise. From here the haunting refrains of the Stravinsky is introduced and then a second movement, also with a substantial violin solo (similarly significant) is Goehr’s elaborations on the Pastorale, ingenious and agreeable.

John Casken’s Infanta Marina (1994) is an instrumental-septet piece based in literature – Shakespeare’s Pericles and Wallace Stevens’s eponymous poem – a cor anglais taking the vocal line, as it were. On one side of the soloist is flute, viola and harp (think Debussy’s Sonata) and on the other are clarinet, horn and double bass. The flute doubles piccolo and alto flute and the clarinettist also needs a bass. Over fifteen minutes Casken’s piece compels in its languid and evocative opening, the ensuing spectral activity and the developing feverish intensity. Gareth Hulse was very lyrical and resolute on the cor anglais and Martyn Brabbins ensured lucidity.

Continuing such excellence was Judith Weir’s Airs from Another Planet (1986), inspired by the idea of a human colony being established on Mars and the incumbents preparing for such desolation by being isolated on a Scottish island. Cue some indigenous tunes that are “embedded” into Weir’s four movements, composed for flute/piccolo, oboe, clarinet, bassoon, horn and piano. Over a timing similar to the Casken, Weir’s spiky, decorative, jauntily mechanical and humorous invention – at times reminding of Ligeti – proved enjoyably quirky, full of rhythmic élan and quite captivating. Invidious though it is to mention one musician from such a team effort, it must be said that pianist Tim Horton was especially brilliant.

To a capacity audience, the main concert began with Wagner’s Siegfried Idyll, as the composer originally presented to his wife Cosima on Christmas Day 1870 at their villa on Lake Lucerne. The thirteen required Nash members (I believe, against the printed advice, that Laura Samuel in fact starred as the lead violinist) and Brabbins gave a beautifully played account with much feeling, leisurely and tender yet the score reached its climax organically, Mark David’s trumpet required for just a few lively bars. Adrian Brendel’s cello was especially persuasive and the performance as a whole seemed a love-letter enshrined in music and left the sweetest of feelings.

If Mozart’s C major String Quintet (with two violas) is not on the exalted level of its G minor companion (K516) it is nevertheless sunny music of largesse and, led by Stephanie Gonley, here was a joyous interpretation of it, not least bringing out the work’s gratifying Haydnesque qualities. The first movement was leisurely, and with the lengthy exposition observed it went on a while! The Minuet danced agreeably and the Trio frolicked. For all the loveliness of the playing, the serenade-like slow movement never quite found the depths that one senses the composer was trying to express, but the finale, with its maddeningly memorable tune, bubbled with the players’ invitation and fizz.

Finally, and occupying the whole of the second half, were selections from Richard Strauss’s final opera, Capriccio, beginning, as does the stage-work, with a string-sextet, heartfelt and elegiac (and, on this occasion, seeming to share a similar sensibility to the slow movement of Beethoven’s ultimate String Quartet, Opus 135) before something more tempestuous and impassioned arrives on the scene. Once more with Gonley leading, and Bjørg Lewis as second cellist, this reading got to the heart of the matter.

Lesley Hatfield (from the BBC National Orchestra of Wales) then took the first-violinist’s role, for David Matthews’s typically sympathetic and idiomatic arrangement (adding winds, harp and harmonium to the sextet) of the ravishing ‘Moonlight Music’ (wonderfully shaped by Brabbins) and the ‘Closing Scene’ from an opera that discusses whether words or music are the most important (the libretto is by one of Strauss’s closest collaborators, the conductor Clemens Krauss). Sally Matthews, as the lonely and reminiscing Countess, was in alluring voice – soaring, ardent – but perhaps she misjudged the carrying power of Wigmore Hall’s acoustic and she was at times strident. Similarly the Nash members might have played a little more quietly, but Richard Watkins’s horn solo was exquisite, a perfect closing of the curtains and the evening as a entirety, quite superb in terms of music and music-making.