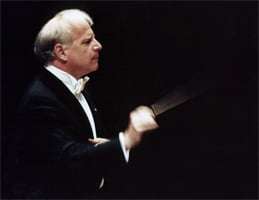 Leonard Slatkin has been at the helm of the Washington DC-based National Symphony Orchestra for well over a decade. He has raised the orchestra’s overall standard of playing and programmed a balance of traditional repertoire and more unusual fare that reflects his eclectic and far-ranging tastes. This concert at Carnegie Hall was no exception, bringing together a New York premiere, a familiar concerto and Slatkin’s unique take on an orchestral favorite.

Mason Bates’s Liquid Interface for electronics and orchestra was composed in 2006, and addresses climate change and global warming in explicit musical terms. Bates himself ‘played’ a computer-controlled keyboard containing sound samples both electronically generated and drawn from nature; indeed the opening movement, ‘Glaciers Calving’, contains the thunderous sound of a glacier breaking apart, combined with other sounds as a pop-style ‘rhythm bed’ for the highly melodic orchestra material, eliciting the slow sound of a sensual dance of death. The second movement, ‘Scherzo liquido’, contains a myriad of electronic sounds reminiscent of pioneering works of the 1960s and 1970s over fleet melodic material in the orchestra; then comes the slow, ‘bluesy’ New Orleans-inspired variations of ‘Crescent City’ that gives way to an electronically generated “levee burst” that shook the Hall. The flowing melody and undulating sounds of the final movement, ‘On the Wannsee’, seemed to bring together the worlds of Brian Eno and popular music before vanishing in a mist. The overall effect of the work is somewhat similar to Rautavaara’s Cantus Arcticus, but with ‘soloistic’ electronics. At 31, Bates has written a thoroughly fascinating and social-conscious work that deserves a wide audience. He could not have hoped for a better or more sympathetic partner than Slatkin. 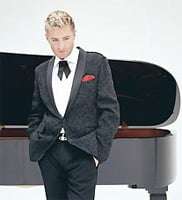 Then Jean-Yves Thibaudet and Slatkin breathed new life into Liszt’s Piano Concerto No.2, taking an approach that made the composer sound more an heir to Berlioz and Chopin than merely a virtuoso showman. Thibaudet played the daunting solo part with velocity and fluency, and greater focus on melodic development and rhetoric than pyrotechnics, revealing a work that is imaginative, witty and formally innovative. A particularly breathtaking passage was the piano and cello duet that opens the Allegro moderato section, played with elegance by Thibaudet and David Hardy.

While Slatkin could rarely be labeled an interpretative interventionist, his ‘retouching’ to Ravel’s orchestration of Mussorgsky’s piano suite Pictures at an Exhibition is characteristic of his penchant for exploring and rethinking music. Slatkin has performed different orchestrations of this work over the years as well as versions of his own devising combining different composers’ and arrangers’ orchestrations. Slatkin’s revisions are intended to bring Ravel’s scoring more in line with Mussorgsky’s original – such as restoring missing measures to ‘The Ballet of the Chicks in Their Shells’ and adjusting dynamics to correspond to the piano version. Slatkin also restores the fifth ‘Promenade’, omitted by Ravel, in an orchestration of his own that is so seamless that one would think it as Ravel’s handiwork.

Slatkin and his orchestra imparted strongly individual character to each movement – a marcato undercurrent to the first ‘Promenade’, a real growl to the lower strings in ‘The Gnome’ (definitely not your garden variety), a ‘Bydlo’ restored to initial forte dynamics that puts one face-to-face with a not-so-placid herd, a touch of awkwardness to ‘The Ballet of the Chicks’ as they emerge from their shells, and real bustle to ‘Limoges: The Market’. The restored dynamics give the ‘Great Gate of Kiev’ finale an added level of drama and grandeur.