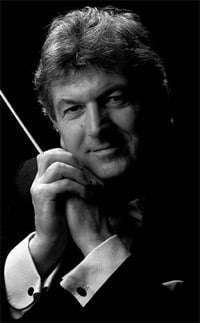 For the purposes of this review, just strike the word ‘youth’ from National Youth Orchestra of Wales. The orchestra’s performance, in the second of its five-concert Summer 2010 series, was on a par with many professional orchestras and deserves consideration as such. Music Director Owain Arwel Hughes has professional expectations for this group, and so should we. Hughes’s high standard is evident in the choice of the programme, a full-on romp that would challenge any orchestra.

The concert with began with Troad, a symphonic treatment of Welsh folksongs by Brian Hughes (no relation to the conductor that I can discern), a work of relentlessly lively tempos and diabolical rhythmic variation. The energy and intelligence of orchestra and conductor were more than a match for the technical challenges posed by this playful yet sophisticated work, which I imagine would become still more enjoyable upon repeated listening; a recording would be welcome.

Debussy’s La mer shows off all the constituents of a large orchestra, and this performance came complete with four harps, 70 strings, and a more-than-full complement of winds. Hughes brought the orchestra through an effortless sweep over the full dramatic and dynamic range required by this music, despite their being crammed into a small space, with the percussionists sited somewhat awkwardly in an opened wing. One might only have wished for a brighter expression of tone from the flute soloists.

Without cuts, Rachmaninov’s Second Symphony runs to almost an hour, exhausting any orchestra, and taxing the attention span of many listeners. If the full-length version knackered this ensemble, however, it was in no way evident. The players maintained pace, dynamics, and technical quality, but most importantly, the work’s shape and the composer’s intentions were taken several degrees beyond compelling.

The National Youth Orchestra of Wales is fortunate to have had the sensitive and non-nonsense leadership of Owain Arwel Hughes, for he is standing down after seven years with this outfit. The UK, though, is the beneficiaries of a present – not to mention a future – populated by the likes of these musicians, already mature beyond their years.