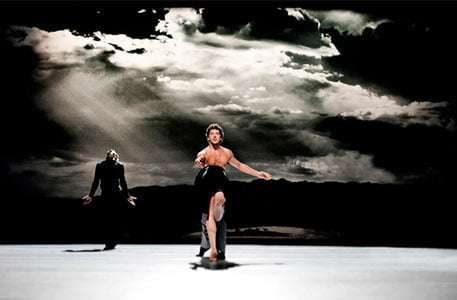 The number two loomed large at Nederlands Dans Theater 1 at Sadler’s Wells: two pieces by the choreographic duo Sol León and Paul Lightfoot (the William-and-Mary of contemporary dance), two long stylistic shadows cast over their work by Jiří Kylián and Pina Bausch, and your reviewer very much in two minds.

Lightfoot/León have undeniable strengths, not least the near virtuosic theatricality of their conceptions – they not only choreograph but they design the stage decor, which in the case of Sehnsucht (Longing) and Schmetterling (Butterfly) work to considerable effect, and often the costumes, too: Schmetterling, unusually, brings in outside designers. Thus stage images of real potency are created – the moody earth and sky cyclorama which is slowly revealed during the latter embraces and provides a powerful backdrop, and the remarkable rotating room cube of the former, in which the admirable Parvaneh Scharafali and Madhi Walerski climb about, walls becoming both floor or ceiling. Lighting is highly effective, and the costumes, variations generally on the theme of black, do not obscure the movement.

Ah, the movement. Not without some merit, especially when in adagio and also in assuming sometimes quite striking poses, but, the general palette remains limited – the raising of one straight leg to the side and holding the pose is repeated again and again, and the eye’s appetite for it is quickly sated. Lightfoot/León are not averse to a liberal scattering of Tanztheater grimaces, gurnings and sundry facial contortions that add precisely nothing to the overall effect (and detract greatly in from the seriousness of purpose). My own dance no-no – shouted interjections from the performers – plays a wearisome role, especially in Schmetterling, confirming my long-held belief that dancers should be seen and never heard.

The duo seem caught in a limbo between pure dance and Tanztheater, seemingly unsure which way to jump and opting for an ultimately unsatisfying compromise. Thus Schemtterling interleaves pieces by Max Richter with ditties by the Indie group The Magnetic Fields. For the former, there is somewhat heavy movement for soberly clad dancers (including the intriguing white-haired personage of Ema Yuasa), for the latter, a group of male and female dancers are clad in a style that could only be termed as 1950s Belgian convent girl: wrap-around school coat, shed to reveal sober Little Black Dresses, black socks and a beret/snood confection. The effect is amusing, the movement frivolous – Christopher Bruce on an off day. In all these gambollings, as in the evening throughout, the dancers of NDT 1 serve their choreographic masters with utter devotion and a complete understanding of their style. What is missing, in the case of the songs in particular, is any relationship between the movement and the music, thus weakening considerably the entire concept. At 45 minutes it is also far too long – two pieces of twenty minutes each could easily be constructed from this unsuccessful amalgam.

Much more preferable is Sehnsucht, not because it said very much – the movement is strangely inexpressive – but because the mind’s eye always has something to intrigue it. Bleeding chunks of Beethoven may not have been the best choice, especially in the central section for thirteen bare-chested men and women who dance to the third and fourth movements of the Fifth Symphony, and lose hands down, the music simply overwhelming the limited invention of the movement. But the cube and the clever disposition of the two dancers within it, in addition to the often mesmeric, etiolated form of Silas Henriksen without makes this a watchable work.