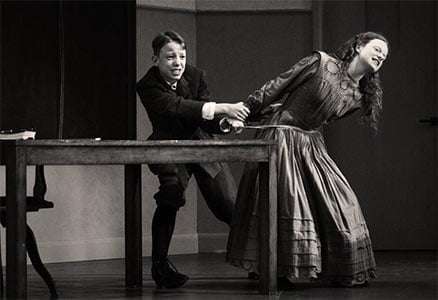 That Opera Holland Park has never previously staged The Turn of the Screw, or indeed any other Britten opera, comes as something of a surprise given the intimacy of the venue. Perhaps the competition has seemed too fierce. With strong productions in the repertoire at Glyndebourne (Jonathan Kent) and ENO (David McVicar), OHP has nevertheless secured the services of a comparably distinguished team, even casting two promising tenors where most houses make do with one. Annilese Miskimmon is back too, notwithstanding her prestigious position with Danish National Opera, and there is no more experienced Britten conductor than Steuart Bedford. Designer Leslie Travers created the set for last year’s Peter Grimes on the Aldeburgh beach.

The latish (8 p.m.) start promised a play of gathering shadows, of spooky atmospherics unavoidably enhanced by the cries of the park’s resident peacocks. In the event, where McVicar’s team left a vast stage largely bare, period costuming dwarfed by the larger abstractions of a sliding-panel set and monochrome lighting, Miskimmon and team have gone for a big idea, decking out the OHP’s shallower space as a (timeless, 1950s-ish) prep-school classroom. The main tale takes place as a sort of giant flashback from the Prologue with Robin Tritschler’s tweedy lab-coated teacher and his retinue of pupils popping up occasionally to hint at the ever-present prospect of an inappropriate relationship. However memorable his lyrical contribution, there is of course nothing more for him to sing. The concept is not well developed and peters out before the end but denying the main protagonists their natural Edwardian setting proves destabilising in the right kind of way. There is little to object to in the welter of ideas thrown at the piece because Miskimmon so cleverly retains its essential ambiguity.

Just as you think she has made the ghosts too corporeal, unquiet spirits whose designs on the children are ‘real’, you notice that they make their early appearances when one or other character is asleep. Are they in fact the stuff of nightmares after all? And if so whose? There is all the fashionable sexual innuendo you might expect (including the implication that Quint and Miles might have shared a bath) plus other more-original touches. Louche, stocky and (shock, horror) a smoker, Quint seems in this production to be already close to, being visually a development of Miles; Flora is similarly identified with Miss Jessel. All are redheads. The Governess, who may or may not be imagining it all, is portrayed as a fragile, sexually inexperienced hysteric who, for all her warm intentions, needs to read up on shaken baby syndrome. From the moment the classroom display-cabinets transform into railway carriages through a clever trick of lighting we sense that all will not be well. That lighting (or the lack of it) impressed throughout, realism left behind in the blood-red of the final tableau.

On first night there was nothing to fault in the instrumental department and, whatever you made of her innovations, Miskimmon had elicited detailed, first-class acting and clear diction from everyone. Rosie Lomas, theoretically a little old for Flora, convinced completely. Dominic Lynch’s Miles similarly found the right register between innocence and knowingness and sang more of the notes than usual. Ellie Laugharne (Governess) produced a silvery vocal quality that contrasted nicely with the richer heft of Elin Pritchard’s Miss Jessel. Replacing an indisposed Anne Mason, Diana Montague reprised one of her signature roles as Mrs Grose. A veteran amid this young, generally light-voiced cast her experience showed in her confident vocal projection and ability to convey a sense of apprehension and concern without appearing to do too much. Quints are often willowy Brits. Not so this one, the American Brenden Gunnell making his London debut, whose voice has a less eerie, more baritonal quality than is often heard in the role. Required to caper about on cupboard-tops and an upright piano he managed admirably, though it was surely a mistake to have him shutting a door at one point.

Possibly the most dramatically successful British opera of all time, The Turn of the Screw is always worth seeing and this production reflects OHP’s traditional high standards. The audience loved it. That said, not every seat was occupied even on opening night. If you have previously discounted a trip to Holland Park, put off perhaps by the supposed focus on Italian fare, now is the time to go. If we do not support such institutions they may not survive. As at ENO English surtitles are provided but we are closer to the action and there is no shortage of that intangible feel-good factor, even in an opera as dark as this one.