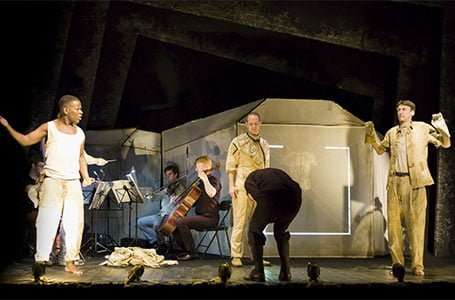 Philip Glass’s stage work has been doing well in the UK in recent years – Music Theatre Wales’s production of In the Penal Colony and ENO’s Satyagraha in 2010, The Perfect American (about Walt Disney), again from ENO, in 2012, and the Kafka-inspired The Trial coming to the Linbury this autumn. Kafka is also the guiding spirit behind this new version of In the Penal Colony (at 80 minutes one of Glass’s “pocket” operas), which Shadwell Opera has just mounted for two nights at the Arts Theatre.

Like the darkest thoughts that take over in the night, In the Penal Colony presents a perfect trap of fear and paranoia, couched in a perfectly credible normality. The Visitor has come to observe an execution, carried out by the dreadful machine described in glorifying detail by The Officer. The Condemned Man has no idea he has been sentenced to death by a prolonged etching by needles into his skin of the words “Obey your superiors”. From The Officer it’s clear that the machine and the system that created it are failing, and the tables are turned on him in the brutal ending.

The guillotine, the electric chair, lethal injection, and any number of martyrdoms – you can’t say that humans aren’t ingenious in their methods of termination, but death by a 12-hour torture of extreme tattooing takes the morbid imagination to new heights of finesse. There’s a terrible ordinariness to The Officer’s sense of bureaucracy and his pride in the death machine, and he has an almost touching need for the approval of The Visitor, who, as an observer, has nothing by way of justification or redemption to offer.

As the two men’s dialogue develops, you marvel at the skill with which Kafka piles on the layers of ambiguity – about faith, loyalty, civilisation, the ‘system’, morality and punishment – underscored by Glass’s equally oblique and mesmerising score. To address this degree of unease and psychological disturbance, you’d think only the full arsenal of Second Viennese School chromaticism would do. Instead, in their minimalist way, Glass’s familiar, chugging accompaniments and simple melodic repetitions supported by his plateaus of diatonic harmony create the charged, hermetically sealed atmosphere just as well.

Jack Furness’s staging was a bit rough round the edges but worked fluently enough in its unnamed desert location. Kitty Callister’s designs neatly set up the horror of it all, with a lot of shadow-play on the side of a bivouac, and the torture scenes were conjured up by rather elaborate puppetry with a gasmask and rubber gloves. The style was basic, but it made its visual points powerfully, as did the video work by Tom Harding.

Andrew Dickinson – with a very minimalist-friendly, vibrato-lite high tenor of considerable beauty – caught The Visitor’s impotence and disgust brilliantly, reinforced by some easy, empathic acting. Nicholas Morris was just as impressive as The Officer, a cleverly played mix of vulnerability, inflexibility and violence delivered by a fine baritone of virile force and expression. Both singers excelled themselves.

The two speaking roles (one of which, if I recall correctly, didn’t figure in the MTW production) included “original writing” by the two actors, to no greater illumination of the libretto and music, so far as I could tell. James Swanton’s wildly gurning Condemned Man overplayed the Grand Guignol, straying a bit too close to Monty Python territory. The string-quintet was completely at home in Glass’s idiom at its doom-laden best, and Matthew Fletcher guided the opera’s sixteen sections with a firm sense of pulse and security of ensemble.