And so it returns, with new and improved sets, costumes and choreography, Matthew Bourne’s most famous, most successful show: Swan Lake. Few will not recognise the image of bare chested male swans in feather breeches and many are those for whom this dance piece remains a powerful memory in their life as a theatre-goer or a performer. First created in 1995, when the sight of powerful, male dancers was something genuinely new, it rapidly became something of a ‘classic’, attracting an enthusiastic audience for Bourne’s particular brand of danced drama. 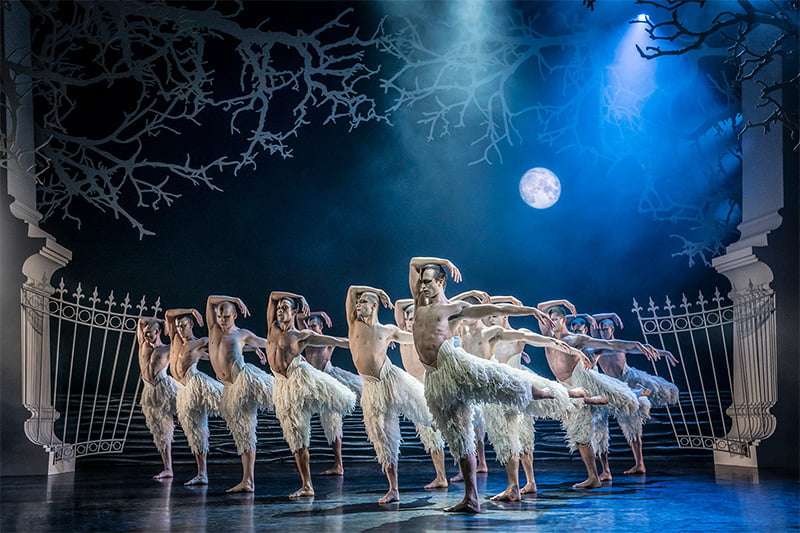 It certainly looks fresh, given its whole-scale revamp with dramatic sets and costumes from Lez Brotherston; indeed, the costumes in particular have a richness and attention to detail which come from the fruits of a long and successful career for Bourne, with a knighthood along the way; be it in the ‘court’ scene or the ball, they breathe quality. Similarly, the impressive sets are strikingly lit by Paule Constable’s new lighting design, thereby each theatrical ‘highlight’ is suitably framed and spotlit.

There remains the somewhat more vexed question of the scenario which, perhaps because of Bourne’s tinkerings, emerges as something more of a mess than memory serves. It is a confused jumble of psuedo-Freudian musings, with a misfit royal prince yearning for love, not finding it in either alcohol or fleshpot suitors and falling for a male swan. A dramatic encounter with a swan look-alike leads to disaster, madness and worse, the swan corps returning to the prince’s bedroom (mind?) to wreak their revenge.

Bourne tells his tale with an uneasy mix of high camp, low humour and ‘dramatic’ dancing which somehow does not entirely gel. Scenes feel disconnected, arbitrary at worst, as in the over-long ‘Opera House’ ballet scene, which, exasperatingly, presents ballet as Victorian campery in a pastiche dripping with prat-falls and sight-gags worthy of the Trocks. In the ‘black act’ ball scene, now a glitzy, Hollywood taste-free zone, Tchaikovsky’s music indicates various nationalities, something Bourne initially follows (a dreary Spaneesh number, followed by a witty Neapolitan depicting a full-out Italian lovers’ tiff) but then drops.

The scene with the Prince at the hospital / mental institution feels like padding, and owes not a little to Kenneth MacMillan’s nurses for Act Three of Anastasia; indeed, that choreographer’s Mayerling seems to have been a heavy influence, with a tortured mother-son duet for the Prince and the Queen and even a louche night-club scene. Moments of pathos are sometimes cut across by comedy, making one unsure as to the tone the choreographer wishes to take – in what is a ‘serious’ episode, the lakeside scene is punctuated by the ‘dance of the cygnets’, Bourne playing up to the bubbling woodwind with movements of decidedly comic hue. However, where it works, it works well, so the despair of the prince by the lake is dissipated quite magically by the arrival of the swans with their strange, almost disturbing movements. Here Bourne still hits gold, for, even if the sight of men dancing together in this way is no longer unusual, his reimagining of perhaps the most recognisable and indeed powerful image of ballet is something of genius.

It is perhaps best to take Swan Lake’s choreography as merely part of a whole, because without sets, costumes and lighting, it might emerge as unvaried and repetitive. Certainly, Bourne’s reaction to the score is not wholly successful, with an obvious quality becoming rapidly apparent in his almost slavish observance of Tchaikovsky’s rhythms which delineate the choreographic phrasing, clear beats matched exactly in movement. The score, played live and with considerable verve by the orchestra under Brett Morris, is a major player in Bourne’s Swan Lake, driving it on, at times dominating, as in the frantic ‘black swan’ pas de deux which sees undistinguished stage movement unable to match the torrent of sound from the pit.

Bourne’s ensemble is a likeable grouping of performers who enter fully into the spirit of proceedings and deliver his choreography with zeal. It may be the re-working, but less characterisation, less individuality seem to come across and, in their place, a somewhat ‘West End’ gloss has descended. Even named characters seem not to add another dimension to the two they possess; the Queen, played with assurance by Nicole Kabera, is a difficult role to read – cold automaton or sluttish vamp? Liam Mower is a superb dancer, and when he is dancing the prince, his body possesses the pained, yearning quality one remembers from Scott Ambler in 1995, but his acting seems at odds with this – the characterisation is more petulant self-indulgence. One can only assume that this is what was wanted.

On loan from The Royal Ballet, Matthew Ball, the dancer du jour, makes a strong impression indeed, not least by his strong stage presence (he seems almost cramped by Sadler’s Wells’s stage) and magnificent physicality; he truly appears other-worldly compared to his fellow dancers. His performance is possessing of a unique fine-hewn alabaster quality; he phrases his dancing in sweeping arcs of movement, his ballet sensibilities coming to the fore in what is, otherwise, a resolutely contemporary movement setting. The role’s originator, Adam Cooper, was from the same ballet stable as Ball, which explains the latter’s comfort in it. As the Swan, he is outstanding, strong, quixotic, mesmerising, but is perhaps a tad too much of the polite ballet prince fully to do justice to the macho, leather trousered swaggerings of his doppelganger, the Stranger at the ball. With his hair cut short, he reminded one of Sergei Polunin, who may well be the Swan/Stranger that got away.

Swan Lake is a fine entertainment, a lavish and generous production which, 23 years on, continues to bring a still-striking reimagining of the ‘classic’ ballet to the stage. It is a crowd-pleaser which will satisfy young and old alike despite its somewhat rambling, episodic narrative and variable choreography. But if it manages to delight and inspire, as it did a young Matthew Ball, then perhaps that side of it is not so very important.