Gilbert & Sullivan
The Gondoliers, or The King of Barataria – Comic opera in two Acts; libretto by W. S. Gilbert with music by Sir Arthur Sullivan 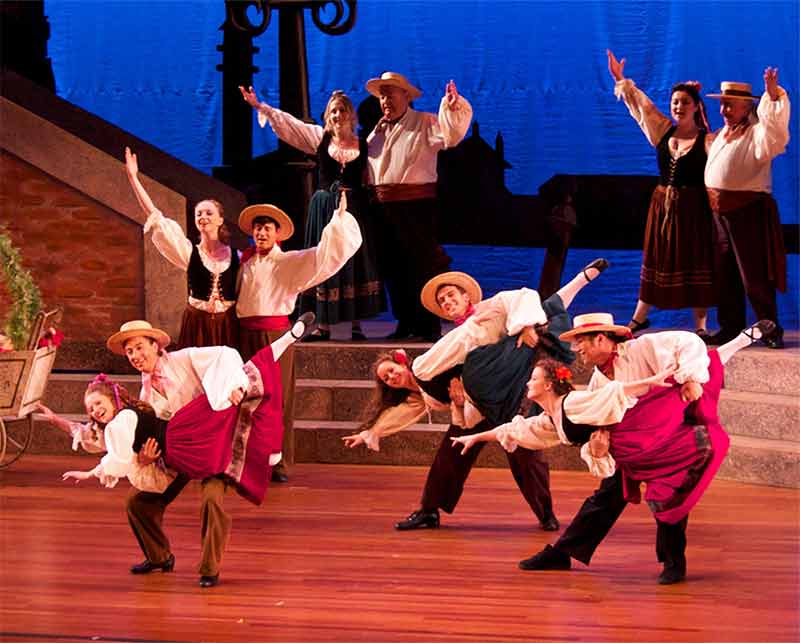 Since its founding in 1974, New York Gilbert & Sullivan Players has become America’s pre-eminent professional G&S repertory company, presenting more than 2,000 performances of the Savoy Operas in a variety of venues in New York and on tour throughout North America as well as in the UK at the International Gilbert & Sullivan Festival in Buxton and Harrogate. For its fortieth anniversary season it has found a marvelous new home at the NYU Skirball Center, which affords excellent sightlines and acoustics that enable both music and dialogue to be heard with outstanding clarity. NYGASP concluded the current term with this sparkling production of The Gondoliers, the last popular success for W. S. Gilbert and Arthur Sullivan.

This is a traditional staging, consistent with the guiding philosophy of Albert Bergeret, whose career-long approach to Gilbert & Sullivan has been to refine and perfect their brilliant gems rather than impose new or different concepts upon them. At the same time, recognizing that the Savoy Operas were popular entertainments and vehicles of social satire, replete with topical commentaries upon politics, fads and fashions, Bergeret’s productions inject topical humor – in The Gondoliers a quip about iPads and free Wi-Fi in the Grand Inquisitor’s torture chamber. 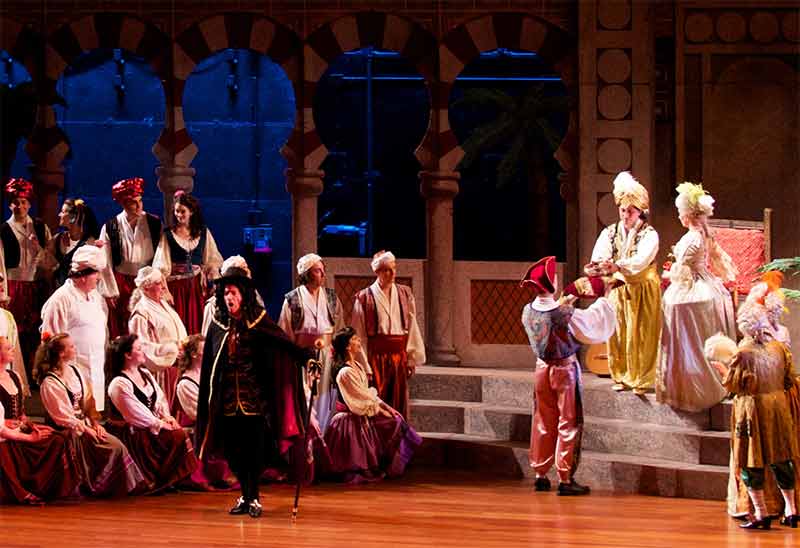 The plot has a topsy-turvy flavor, returning to the baby-swapping theme used in HMS Pinafore, but avoiding the patent absurdity of the exchanged infants growing up to be of different generations. Gilbert’s satirical barbs are aimed at influence-peddling politicians and monarchs whose attempt to reign consistently with republican ideals proves ineffectual.

The story turns on which of two gondoliers, Marco and Giuseppe, is the heir to the throne of the island kingdom of Barataria, and who as a baby had been spirited away to Venice by the Grand Inquisitor, Don Alhambra Del Bolero (‘I stole the Prince’) – but not before being married by proxy to Casilda, the infant daughter of a Spanish grandee, The Duke of Plaza-Toro. Now that the king has been deposed and killed, the impoverished Duke, accompanied by the Duchess, the now 21-year-old Casilda, and their drummer-boy Luiz, arrive in Venice only to learn that the identity of Casilda’s husband is in doubt. She is far from elated at the prospect of being queen, since she and Luiz are secretly in love (‘O rapture, when alone together’). 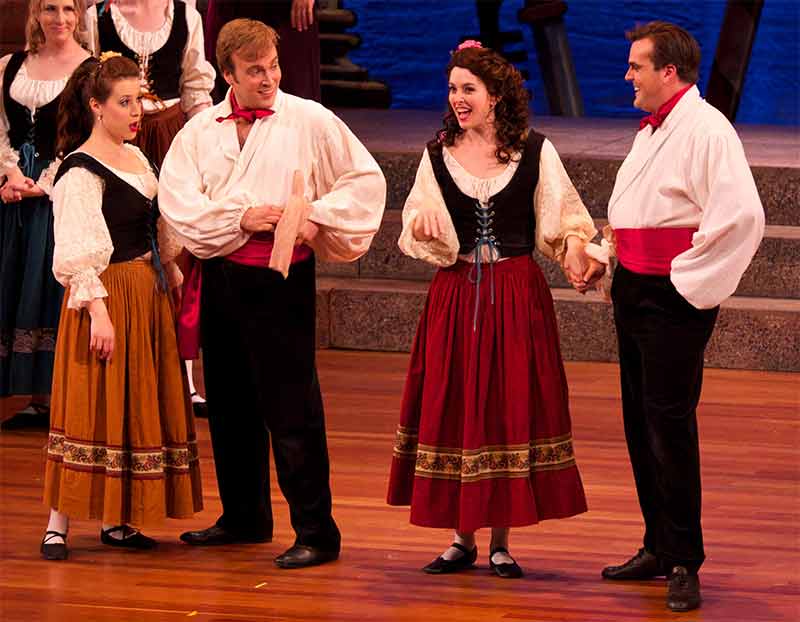 Further complications arise because the eponymous gondoliers, blissfully unaware of the foregoing circumstances, have just married their sweethearts, Tessa and Gianetta. The Inquisitor persuades Marco and Giuseppe to reign jointly until Inez, the nurse who cared for the infant prince, can disclose which of them is the rightful king. The two, staunch republicans, pledge a reign of equality for all (‘For every one who feels inclined’) and they and their fellow gondoliers set sail for Barataria, leaving their wives and girlfriends behind (‘Then away we go to an island fair’).

Three months later, Marco and Giuseppe are hard at work (‘Rising early in the morning’) serving their indolent friends, all of whom hold titled positions at court. When the ladies left behind in Venice unexpectedly arrive, the ensemble celebrates with a wild Spanish dance (‘Dance a Cachucha’) that is interrupted by the appearance of the Grand Inquisitor. Upon learning that Marco and Giuseppe have made everyone the head of a department, he explains the folly of this arrangement (‘There lived a King’), pointing out that “when every one is somebodee, then no one’s anybody.” He informs them and their wives of the prince’s childhood marriage, setting them quarreling with each other (‘In a contemplative fashion’).

The Duke, now “blazing in the luster of unaccustomed pocket-money”, seeks to prepare the prince for assuming the dignity of royalty, teaching Marco and Giuseppe to dance a gavotte. He boasts (‘Small titles and orders’) of earning his livelihood by conferring favors, making speeches and serving on corporate boards, and the Duchess tells of being paid for providing endorsements and attending social functions. Just as Marco, Giuseppe, Gianetta, Tessa and Casilda are at their wit’s end (‘Here is a case unprecedented!’), Inez arrives with a surprising revelation that provides a happy ending for all. She explains that when the prince was entrusted to her, she effected a second exchange, substituting her own baby for the prince, whom she raised as her son, Luiz, who thus is the true King of Barataria. Luiz and Casilda thus can reign jointly while the gondoliers return to Venice with their beloved wives to again ply their happy profession. “We leave you with feelings of pleasure”, the ensemble sings at the end.

Most of the plot exposition and many of Gilbert’s wittiest lines are entrusted to the Grand Inquisitor. Ryan Allen brought terrific comic timing and a resonant speaking and singing voice to the role. His transfixed expression of shocked surprise at Inez’s revelation was unforgettable. Stephen Quint and Angela Christine Smith were superb in the roles of the Duke and Duchess of Plaza-Toro, he telling of his military “leadership”, she explaining how she came to dominate the diminutive Duke, and the two joining for an amusing account of how they trade on their noble rank.

Matthew Wages and Daniel Greenwood made an amiable and amusing pair of gondoliers, the former excelling in his account of their daily regimen as royals, and the latter’s beautifully lyrical aria ‘Take a pair of sparkling eyes’ persuasively arguing that love is the “recipe for perfect happiness”. David Macaluso was an ardent Luiz and Lance Olds an exuberant Antonio, singing that gondoliers are “the merriest fellows”. Amy Maude Helfer’s gorgeous voice stood out in Tessa’s aria ‘When a merry maiden marries’. In the other romantic roles, Sarah Caldwell Smith as Gianetta and Laurelyn Watson Chase as Casilda also gave fine performances.