Pairing a lengthy symphony written by Mahler at the end of his life with a much shorter composition from a contemporary composer in the prime of his life seemed rather strange. The two works have nothing apparent in common or in contrast. But this concern, at least, was allayed by Thomas Adès’s fascinating Polaris. 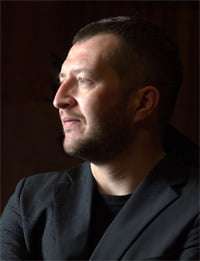 Completed last year, Polaris’s commissioners included the New World Symphony, the Royal Concertgebouw Orchestra, the Los Angeles Philharmonic and the San Francisco Symphony – Polaris (familiarly, the North Star) takes us on a journey through the heavens that focuses upon this legendary sphere surrounded by a myriad of celestial bodies endlessly whirling about it. A solo trumpet represents Polaris with a broad line of sustained tones, embellished by ostinato rhythms in strings and woodwinds that create the impression of constant motion circling about the star. Messiaen’s idiom comes to mind. Complex meter shifts and dense polyphony are substantial challenges. Each time the music grows organically and sonically, it seems headed for a precipice, only to suddenly stop short of fulfillment and become mysteriously still. At last, an orchestral build-up culminates in an enormous outburst from the brass that conflates into a reprise of the soft, sparkling, isolated tones from the opening measures, as if to begin another revolution around the universe. But this time the brass invokes a peroration to the glory of the heavens. After sliding strokes thrust mightily to punctuate the silence into which the swirling profusion dissolves, the work ends on a long riveting chord with A at its center. Some imprecision in the knotty ostinato rhythms, particularly noticeable in the violins, and a few trumpet cracks notwithstanding, the NY Phil managed to stay together throughout most of this challenging work.

Such was not always the case with Mahler 9. Generally, the performance seemed under-rehearsed and sounded shabby, non-committal or disengaged, without engaging proper balancing of voices. At times, horns stuck out like sore thumbs. If Alan Gilbert made any effort to achieve proper balance of inner parts, the occasional falling seconds (the motif of farewell) and some contrasting linear material in the horns would have risen above the orchestra without sounding like counter-insurgents. Rarely have I witnessed from the NYP such intonation problems, so many cracks in the brass, such messy string figuration and so much woodwind imprecision.

More substantively, Gilbert simply failed to generate any sense of this last completed work of Mahler. In fact, the only recognizable attempt to imbue the music with any aesthetic perspective was the riveting fierceness generated during the ‘Rondo-Burleske’ third-movement and the sustained quietude of the finale’s closing moments. In the first movement, none of the tender warmth and nostalgia that permeates this music, which muses over an age in decline, was apparent. Instead, when one was not distracted by the overstated horns and trombones, a sense of constant urgency was imposed on the tempos, completely ignoring the structure. Incessantly on edge, the music was forced ahead without the slightest respite, so that the various subjects seemed disengaged, providing little contrast. The movement lacked an overview, intent on generating high volume and furious intensity that had no direction or conceptual purpose. The only time that Gilbert made an effort to evoke the music’s emotive quality was when he leaned on the upbeat to the main theme, a device that can work if it is handled with finesse and not over-emphasized as occurred here. Too many times the music seemed to proceed as if on auto-pilot: dry and mechanical, the orchestra sounding raw and harsh, the coloration pale or tarnished.

The conflict between a bumptious Ländler and a cosmopolitan but overly aggressive Waltz, which is the subject of the second movement failed to emerge, the former with little foot-stomping rusticity. In contrast, the rough-hewn waltz had a suitably aggressive character. The principal horn wailed over the orchestra to no purpose, although it is the tuba that should act like a clown during the waltz. The third theme, a Ländler than gracious the first, lacked charm. Gilbert seemed more intent on projecting the conflict without adequately characterizing the opposing forces, threatening to speed out of control.

Beginning in a furiously fast tempo, the Rondo-Burleske suffered from ill-conceived tempos, overshooting the mark when considered in relation to increasingly faster pace set during the coda. When the horns have the spotlight, they played beautifully, but they were too pronounced at other times. The nasal quality of the trumpet was disconcerting. The lyrical middle section was hurried.

Gilbert’s tempo for the finale (conducted in eight-to-the-bar) lacked breadth but worked well enough when considering the tempos of the preceding movements. But, instead of sounding like an ardent prayer that values of the past should not be discarded, the two principal themes sounded merely strong and passionate if perfunctory. Although the strings were forceful, nothing of the music’s yearning for resolution was conveyed: too often hyped-up volume replaced emotional depth and spiritual expression. Some direction from Gilbert to restrain the brasses’ incessant over-blowing would have been helpful. During the final moments, the brass now silent, did any sense of peace prevail: by then, it was more of a relief than a leave-taking, with only Carter Brey’s deeply expressive cello solo that leads into the coda interjecting some profound emotion into this stultifying performance.