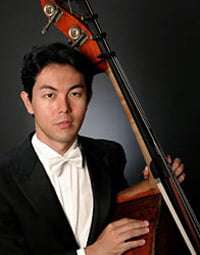 One becomes wary when a disclaimer about the compositions is given by the musicians. This Sunday afternoon recital by New York Philharmonic Ensembles was introduced by bassist Satoshi Okamoto, who was also a performer in the initial ‘Mozart’ piece. It was not immediately clear what the link was between the works presented, except that all were obscure. In his introduction, Okamoto noted that the pieces were for a range of stringed instruments, and for rarely heard combinations. “Perhaps by the intermission you’ll know why”, Okamoto dryly added. He then gave an ambiguous introduction to Mozart’s Sonata for Violin and Bass, which is “maybe not by Mozart” (it is not in the official Mozart catalog) and “maybe not for bass.” What was for sure, he concluded, is that the piece was old and the bassist gets to play fast. According to the printed program, the piece was written by Mozart in 1768, making him at most age 12. The bassist did indeed get to play fast, in an accompaniment technically unsuited for the instrument, and there were numerous intonation problems. Duoming Ba had a clear tone and solid technique, but she could not arouse any passion in her playing to redeem this flyaway work.

The mood of the concert changed considerably with Walter Piston’s Duo for Viola and Cello. Piston wrote a definitive textbook on Harmony, and the Duo is notable for its harmonic complexity, created for the most part by suggestion, as there were few of the double stops needed to create a full chord. The opening movement is reminiscent of Hindemith in terms of its chromatic harmony and counterpoint, countered by expressive melodies and rhythmic drive. The second movement features long, sustained phrases with a slow build to a few climactic moments. This movement’s serenely beautiful harmonies sounded quite like the music of Samuel Barber. The third movement, with jazzy rhythms and frequent use of fourths, seems quite American, especially with a coda containing elements reminiscent of country-fiddling. 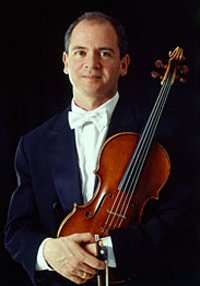 In his introduction Robert Rinehart remarked that the piece was originally written for brothers, possibly explaining the imitative nature of the parts (Rinehart joked that the brothers might have been identical twins). In his performance with cellist Eric Bartlett, there was a real matching of tonal quality, intonation, dynamics, and articulation that was sadly lacking in the other, possibly under-rehearsed, performances.

The first half concluded with Moszkowski’s Suite, written around 1903 and sounding 19th-century in its romanticism. The piece is completely melodically driven, with almost boringly simple harmonies. The violin lines sounded quite operatic in their interactions, with the two voices entwining in a dramatic dialog, and a mainly accompanying role for the piano, which nonetheless had several virtuoso moments that Tatiana Goncharova handled with dexterity. The two violinists were not evenly matched, Yulia Ziskel playing with a small, sweet tone that was overpowered by the brighter, richer playing of Anna Rabinova. The performance might have been more satisfying had the violinists switched parts and they had noticeably mismatched articulation in the galloping finale galloping, but they still managed to provide an enjoyable performance of this lightweight work.

The second half showcased repertory for more standard chamber ensembles: a piano quartet and a piano trio. The former was the premiere of David Winkler’s Piano Quartet No.3, written last year. Winkler introduced the work at length, highlighting his interest in the dialog between the percussive elements of the piano and the sonic sustainability of the stringed instruments. Winkler remarked that, generally speaking in his compositions, his melodic developments are more and more extended, and that if he had to articulate what his music is about, he would say, “Resolving tension to a positive conclusion.”

The quartet felt Brahmsian in scope and mood, a heavy and serious contrast to the preceding Moszkowski. The opening movement’s passionate tension was immediately apparent in the pleasingly dissonant harmonies and the drama of the passing back and forth of the melodic material between the piano and the strings, as if the performers were in a competition for the most intense tone. There was no resolution of the relentless tension at the end of the movement, which ended on an expectant-sounding high chord in the strings. In his introduction, Winkler described the second movement as “sardonic … sarcastic/ironic … derisively mocking” in its expressive quality and sounded quite sinister and Shostakovichian, with many diminished chords in call-and-response patterns. The major-key ending did indeed feel sarcastic in its falseness in terms of resolving the by-now exquisitely pent-up emotional tension. The finale begins with a violin solo in a rare separation of the string parts, but they soon reunited and returned to heated dialog with the piano, culminating in two slow climatic build-ups with the strings occasionally uniting melodically in octave separation. These moments were never fully resolved – the tension of the melodically unabashed romanticism and harmonic dissonance, continual throughout the work, could never be resolved – and the work ended abruptly with a cadence that seemed quite mocking in its abruptness.

The string performers seemed somewhat lacking in spontaneity but were able to sustain the intensity of the work while maintaining the listener’s interest. In particular, Rabinova achieved a varied tonal quality while always keeping up relenting fervency, and Goncharova superbly regulated the concentration of her phrasing. Dorian Rence at times had a strained sound in the higher register, and Qiang Tu had an unwelcome buzz in the upper register and overly fast vibrato at times, but overall it was a fine performance of a richly layered work that deserves many more hearings.

The concert ended with the Turina, written in 1926. Turina, a Spaniard who lived for some time in Paris, was influenced by both Albéniz and Debussy, and the trio seems like a mish-mash of both composers without stylistic cohesion. Helene Jeanney adeptly transitioned between the Spanish folksong-influenced soulful style and dreamy French impressionism. Qiang Tu had a more pleasing tonal quality than in the previous work by using a more relaxed vibrato, but Lachert had a strident tone and noticeably awry intonation on the tricky high-note entries. The stiffness and uncertainty of Lachert’s phrasing seemed so unnatural that one would not have been surprised if she had been sight-reading her part. Given the hectic nature of a typical Philharmonic musician’s schedule, perhaps one should merely applaud the chamber music successes and ignore the occasional interpretative lapses in stylistic integration.