Bizet
Carmen – Opéra-comique in four acts to a libretto by Henri Meilhac & Ludovic Halévy after the novella by Prosper Mérimée [Sung in French with Met Titles in English, German and Spanish]

The Orchestra of the Metropolitan Opera
Yannick Nézet-Séguin 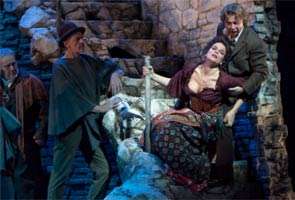 When Tchaikovsky first heard “Carmen” he predicted it would become the most popular opera in the world. And it probably is. It certainly is the most familiar one. Everyone knows the story of the young corporal who abandons his regiment and his fiancé to run off with a beautiful and bewitching gypsy, even people who have never set foot inside an opera house. Countless film adaptations, plays, ballets, parodies, cartoons and commercials have made Bizet’s infectious melodies instantly recognizable to the most-neophyte of opera goers. The work has been a staple of Metropolitan Opera repertory since 1878, when it was first performed (in Italian) at New York’s Academy of Music. How then, to brush off the challenge of familiarity and present the piece in a way that is truly gripping and memorable?

Director Richard Eyre, making his Met debut, has done it by updating the setting by a century to 1930s’ Seville during the Spanish Civil War. This in itself is not so remarkable. In an effort to steer clear of touristy, picture-postcard views of sunny Spain, opera directors have adopted a variety of twentieth-century settings, the Spanish Civil War being among the more prevalent. Eyre achieves something distinctive by presenting multilayered, believable characters and by using the full dramatic potential of the setting to get at the earthy, passionate core of the work. In Eyre’s view, Carmen’s doom-laden pursuit of freedom is motivated by sex, and his production is character-driven to the extreme, as the society of restless, freedom-loving gypsies is pitted against the more oppressive world of the Guardia Civil. 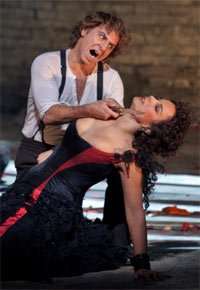 Everyone in the cast is impressive. The principals all have solid, attractive voices and their acting has clearly been given a very high priority. In the title role, Elīna Garanča carries the greatest dramatic weight in this superbly directed production. Garanča is a beautiful and extraordinarily manipulative Carmen. Playful, sarcastic, restless, independent and haughty by turns, she is above all sexy. She sings well, too, delivering the Habanera and Seguidilla with seduction and subtleness, but giving her all in the no-holds-barred final scene.

As the weak-willed Don José, Roberto Alagna is perfectly cast, delivering a spontaneous, intensely moving performance. The repression required in the first two acts came easily to him, as he perfectly communicated his character’s vulnerability and obsession. His heartfelt duet with Micaëla in Act One was full of youthful vitality, while his Act Two ‘Flower Song’, ending with a fully expressive pianissimo B flat, was completely disarming. In the final scene he acted and sang with remarkable abandon as he convincingly portrayed his character’s desperation.

As the faithful and good-hearted Micaëla, Barbara Frittoli gave a warm and touching portrayal, singing her Act One duet with Don José with appropriately girlish innocence, although her Act Three aria, “Je dis que rien ne m’épouvante” (I said I could never be frightened) was less than completely moving. Mariusz Kwiecien’s commanding baritone combined with his darkly handsome looks and elegant carriage made a charming and convincing Escamillo. He sang with rich, virile tone and stylish assurance, delivering the ‘Toreador Song’ with enough panache to turn it into an appealing narrative. Among an unusually strong supporting cast Keith Miller was a standout as Zuniga.

For the tavern scene choreographer Christopher Wheeldon has created a rousing flamenco-style dance in which the dancers, clad by costume designer Rob Howell, looked like real, cave-dwelling gypsies. And solo dancers Ashley Tuttle and Keith Roberts, making their Met debuts, displayed extraordinary harmony and grace in the two fervent pas de deux they danced during the Preludes to Acts One and Two.

Howell’s sets and costumes managed to avoid clichés and do justice to the story by aiming for the heart of the drama. Howell has adopted the idea of a scar as a leitmotif. During the Prelude to Act One a gigantic blood-red slash runs the entire length of a jet black curtain which later opens to reveal the crumbling circular arena that is used as the central scenic element in Acts One and Four, rotating to represent a town square, a military guardroom, and the area outside a bullring. Peter Mumford’s lighting was particularly effective in Act Two, where the smuggler’s hideout was most effectively shrouded in blue mist; and in Act Four where the bright lights coming from inside the bullring contrasted with the sinister events taking place outside.

Yannick Nézet-Séguin led a spirited, clean-cut account of Bizet’s marvelously melodic score, full of delicate colors and always sensitive to the demands of the drama as well as the needs of the singers.