To begin, Maazel continued his traversal of J. S. Bach’s Brandenburg Concertos, one of the themes of this, his final season as the Philharmonic’s music director. This time it was a reading of the Second one, with the solo parts played by the orchestra’s principal associate concertmaster (Sheryl Staples) and its flute (Robert Langevin), trumpet (Philip Smith) and oboe (Liang Wang) principals, all performing on modern instruments. Each of the soloists gave an outstanding performance, with Staples showing a particular flair for the baroque idiom. The balance between the concertino instruments and the ripieno strings was less than perfect, however, with the latter coming through a bit too strongly, particularly in the opening movement, thereby diminishing the clarity of the solo lines. More pleasing were the Andante, where flute, oboe and violin played against only a basso continuo accompaniment (one cello, one double bass and a harpsichord), and the beginning of the final movement, when the trumpet, with its brilliant opening theme, re-joined the other soloists. The texture again became somewhat muddied with the re-entry of the ripieno, although this did not prevent the vigour and joy of the concluding fugue from coming through.

Next were two works featuring Emanuel Ax. The first of these, Karol Szymanowski’s Symphonie concertante, which is also enumerated as the composer’s Fourth Symphony – but neither of these titles is really accurate. The solo piano part is much more prominent than in a symphony, and there are no other solo instruments prominent enough to make this a true sinfonia concertante. In the final analysis, this work is most nearly akin to a piano concerto, although the subordination of the piano part to the orchestra in the second movement calls even that classification into question.

This rarely performed work proved quite pleasing, with Ax, playing from a score, giving a highly engaging performance that carefully observed the shifting roles that Szymanowski assigned to the piano. Ax’s virtuosity was particularly evident in the cadenza late in the opening movement, but there are many technical challenges throughout the work, all of which Ax handled with aplomb. The orchestral accompaniment featured solos for many instruments and was, on the whole, quite powerful and sometimes even bombastic, as when the opening movement came to a crashing close.

The piece took an unexpected – and most non-concerto-like – turn at the outset of the second movement, when the piano provided a soft accompaniment to extended flute, violin and viola solos, but this proved the most arresting portion of the work. Later in the movement, the orchestral sound welled up, with the piano becoming more assertive and a well-played trumpet solo marking the music’s emotional peak and which soon slowed and quietened, returning to chamber music proportions. Thematic material from the opening movement returned, and a brief, trilling solo-piano passage propelled the work into the finale, which began with an extended solo for timpani and employed the rhythm of a Polish folk dance, the oberek. As the music increased in intensity, Ax’s playing became more forceful and virtuosic. Lyrical violin solos and a gentle string passage led to an introspective piano solo, after which the intensity increased as the work drove toward an exciting conclusion. 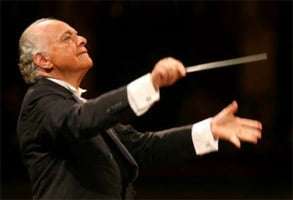 The first half concluded with Richard Strauss’s Burleske, a delightful, youthful work that foreshadowed the composer’s successful career that was to span another sixty years. This work also cannot be neatly categorised into any recognised genre, most nearly resembling a concerto-movement – and a somewhat peculiar one at that. It opens in a most unorthodox fashion, with the principal theme stated by timpani; their prominence continues throughout, often trading material with the piano, with a soft drumbeat as the work’s final note. The piano part is both witty and stormy with tonalities often suggestive of Brahms – who was still an active composer when Burleske was written. The mood of the piece alternates between dramatic sections that are pervaded by the percussive opening theme, and gentler interludes in which a second, lyrical theme dominates. (This alternation of moods inspired one of Antony Tudor’s finest ballets, Dim Lustre, in which each gentle interlude represents a recollection of the past, with dancers identically costumed and choreographed as if one were the mirror image of the other.) Ax’s playing was spirited and powerful in the dramatic sections, technically dazzling in the work’s rapid-fire passages, and luxuriant in the gentle interludes. Maazel’s gestures fairly exuded the spirit of the piece and the orchestra responded accordingly.

After the interval, Maazel led the Philharmonic in a performance of Ravel’s matchless orchestration of Mussorgsky’s piano suite, Pictures at an Exhibition. Few works offer so many orchestral players so many opportunities to display their virtuosity, and the Philharmonic’s musicians took full advantage.

The brasses were perhaps the most prominent, including the trumpet’s opening ‘Promenade’ theme and its portrayal of the poor Jew in ‘Samuel Goldenberg and Schmuyle, both brilliantly played by Matthew Muckey. Principal tuba Alan Baer contributed fine solos in Bydlo and ‘Baba-Yaga’ and combined with the entire brass section to create an overwhelming sound in ‘Catacombs’ and the majestic finale, ‘The Great Gate of Kiev’. As in both of the preceding works, this was a busy evening for the percussion section, early on in ‘Gnomus’ and culminating in the sounding of a large church bell in the concluding bars. Maazel recognized the entire brass and percussion sections for well-deserved bows.

The winds demonstrated both expressiveness – as exemplified in the second ‘Promenade’ and in the ensuing haunting alto saxophone solo from Albert Regni in ‘The Old Castle’ – and agility, as in ‘Tuileries’ and ‘Unhatched Chicks’. Principal flute Robert Langevin in particular was put through his paces in every work and rose to the occasion each time. The Philharmonic’s strings were also in fine form, with the low instruments contributing powerfully to the portrayals of ‘Gnomus’ and ‘Samuel Goldenberg’, the violins creating the airy atmosphere of the ‘Marketplace at Limoges’.

Maazel evoked from the orchestra a variety of musical portraits, doing little more than giving the listener the feeling of strolling through a picture gallery. That was, after all, Mussorgsky’s original concept; even if some of these orchestral images were less compelling than some others, this was still an exhibition well worth visiting.