Elgar
Violin Concerto in B minor, Op.61
Copland
Symphony No.3

Riccardo Muti was originally scheduled to conduct this week’s subscription program, but had to bow out due to illness. It would have been interesting to hear his takes on two works that one would not be associated with him.

Michael Christie, director of the Brooklyn Philharmonic, stepped in to fill the void. Christie is more closely linked to contemporary than to Romantic repertoire. 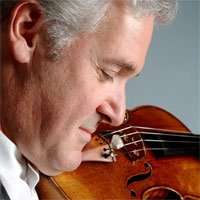 The performance of Elgar’s Violin Concerto was more muscular than sentimental. Both Christie and Pinchas Zukerman brought unusual assertiveness to the first movement, and intensity to the longer-lined melodic material, Zukerman both expressive and intense. The Andante second movement maintained a similar level of restlessness; Zukerman modulated the wide, rapid-fire vibrato he had displayed in the first movement to unexpected expressive effect. The grand-scale finale can be ungainly; Christie and Zukerman not only brought unusual clarity to this massive challenging movement but also a virtuoso, devil-may-care approach that was refreshing — if more than somewhat subversive — that was not only a showcase for the soloist but also the orchestra, particularly the string section. This was ‘square-peg’ Elgar that ripped apart the (hackneyed) ‘round hole’ view that his music must reflect a Victorian and Edwardian aesthetic.

Copland’s Third Symphony was begun months before the D-Day invasion; it was largely completed in 1945 and early 1946, on the heels of the Allied victories in Western Europe and the Pacific theater. It is in more conservative than most of Copland’s preceding symphonic and ballet scores, a very traditional symphony cast in four movements, with the finale introducing Copland’s own Fanfare for the Common Man of 1942.

While the opening bars were not quite as together as they should have been, the opening chorale-like music in the brass and winds was particularly evocative, and the brass outburst that precedes the opening movement’s second theme had particularly strong impact. A few balances in the opening movement were less than optimal (to the detriment of the strings) and the climactic moments, but Christie nevertheless evoked the movement’s contrasting portraits of apprehension and aspiration that reflect the huge shadow cast by events of the times. Christie and the Philharmonic, particularly the wind players, used nuanced articulation and phrasing to put the second movement’s manic exuberance in check, lending more grace and less breathless angularity to the outer sections, and an almost folksong-like cantabile to the melodies of the central section.

The opening of the Andantino third movement can sound elegiac, but Christie brought the music subtle intensity, with string pizzicatos packing particular punch and the central section’s restlessness and ultimate ambiguous dissolution setting the ideal mood for the entrance of the ‘common man’ theme, largely optimistic and energized by the possibilities before the nation save for a dissonant outburst based that opens the Fanfare, to which Christie and the players brought unusually vehement force. The coda was a little rushed and also short on grandeur but nevertheless brought the work to an optimistic conclusion.

Considering the short notice with which Christie stepped in to lead this program, he did an excellent job, and showed that he has a great deal to offer in not-so-recent repertoire.