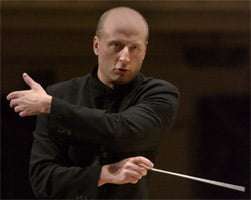 In Erkki-Sven Tüür’s words, “Aditus (approach, access, entrance, beginning, chance) is a nine-minute concert opener based on the gradually lengthening chromatic scale.” This heavily scored work began with an attention-grabbing dissonance that worked its way down to the orchestra’s lower register before fading out, then repeating itself. The effect was reminiscent of pressing the snooze button on an alarm clock. The initial excitement of the information overload gradually waned as the piece carried on without much variation in intensity. Paavo Järvi, a champion of the composer who shares his Estonian nationality, led the Philharmonic in an assured performance in which the details lost in the balance were an inevitable consequence of the work’s complex nature.

Benjamin Britten’s Violin Concerto (1939, its first performance being in New York in 1940, the work revised later) hasn’t gained a foothold in the average violinist’s repertoire. This patchwork of a piece has its glorious moments, particularly in the orchestral tuttis, yet its many fragments don’t add up to a satisfying whole. The opening bars for percussion, reminiscent of Beethoven’s Violin Concerto, lead to a lyrical solo violin passage. Janine Jansen seemed to work hard to coax sound out of her “Barrere” Stradivarius, and though her tone was sweet, it remained small. She did her best to keep up the momentum in the first movement’s meandering passages, with phrasing that seemed thoughtful. The second-movement’s peasant-like spiccato fragments called to mind the corresponding part of Prokofiev’s First Violin Concerto, until they become étude-like, despite Jansen’s best efforts to shape them. Her technique is vast, despite her faltering of tone during some harmonics. In the cadenza, her legato bowing remained impressively smooth while she simultaneously executed the left-handed pizzicato rhythmic motif. Yet the biggest disappointment was her narrow range in timbre, with a monochrome color that tended toward the shrill side, only gathering a modicum of warmth at the very end of the work. Järvi led the Philharmonic through Britten’s extraordinary scoring, yet the orchestra seemed too heavy in comparison to Jansen’s weak sound. (Janine Jansen and Paavo Järvi have recorded the work on Decca, coupled with Beethoven’s Violin Concerto.)

The suspenseful atmosphere of silence at the concerto’s conclusion was thoroughly ruined by premature applause. One might say that Järvi attempted to appease this desire to get home with Beethoven’s Fifth. The rushed opening barely left room for a breath, yet instead of excitement there was an overwhelming feeling of suffocation. The famous motif seemed to be a lumbering proclamation that left no sense of mystery. Subito pianos weren’t particularly soft, and the heavy-handed bowing had no variation in articulation, leading to an overarching sense of boredom. The airless plodding came as no surprise in the Andante, when the cumbrous upper strings overpowered the wind soloists. The character did not change in the subsequent movements. The very fast tempo in the scherzo meant the cello and double bass runs were an amateurish scramble. Due to the general lack of direction, the finale had nowhere to build towards, and climaxes were notable as such only due to being a little bit louder than the norm. In all, it felt like overkill, an abominable performance of a masterpiece.