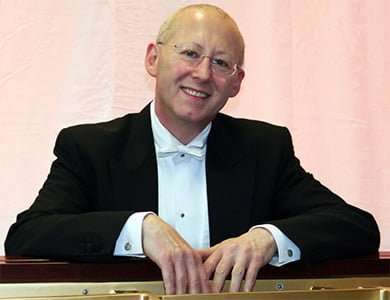 It may be very difficult to fill St John’s, so that a very good audience in terms of numbers for a smaller venue can sometimes appear less than flattering, but with around half of the seats taken for his recital it was clear that the sterling artist Nicholas Walker had drawn a relatively large attendance, attracted by his growing reputation and superb programming. We were rewarded with a recital of consistently outstanding quality.

The quality of Walker’s performances took many forms: his musical penetration and insight, from the opening pages of the Haydn – a quirky, not to say quixotic, first movement – followed by a more restrained, but no less compelling, Allegro di molto made it clear that he is a very distinguished pianist, with a fine imagination and technique to match, but it was in Beethoven’s ‘Appassionata’ that the fullest range of Walker’s artistry became apparent. His penetration and insight into this work were wholly exceptional: the shading of dynamics, voicing, range of tone-colour, structural command, emotional breadth and phrasing – all were of the highest level, brought together by an interpretative musical mind of rare insight. This was, without question, a great performance.

The Liszt pieces proved a perfect foil, played with true virtuoso technique, always placed at the service of the inner musical expression, played with the clearest possible articulation, and Schubert’s rare Drei Klavierstűcke were given with such understanding that one was convinced that they were written after Schubert had studied the ‘Appassionata’ – they almost quote from the earlier masterpiece note for note – yet all three ‘impromptus’ look forward to the world of Schumann which Schubert was not to hear for himself.

Finally, a true rarity: Balakirev’s Piano Sonata, preceded by a talk which one may be sure was interesting, although those near the back of the auditorium found it difficult to hear clearly. Nonetheless, it is an astonishingly original work, quite unlike any other. Walker’s performance was outstanding, brilliant and tasteful without any exaggeration, yet with plenty of power. This entire recital was superbly accomplished, displaying musicianship throughout of a high order.