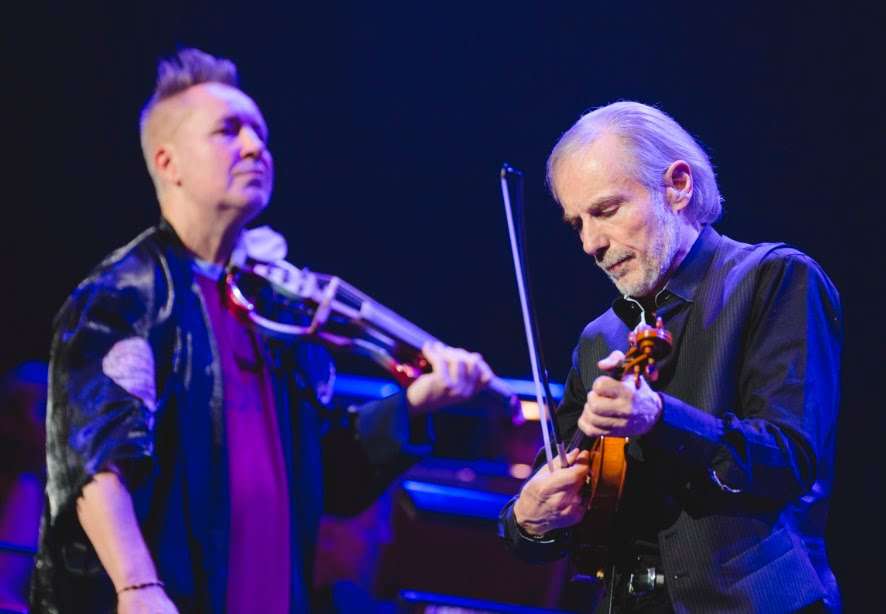 J. S. Bach, Bulgarian folk, jazz-rock fusion, rock: a lot of ground to cover, which might explain why Nigel Kennedy played the opener, Bach’s Violin Concerto in A-minor (BWV1041), at a fair old clip – especially evident in the second movement where he conducted with his bow, wielding it like a riding crop to harry the orchestra along. Johan Halvorsen’s Passacaglia after Handel, with Peter Adams on cello, was also played with plenty of vim, verging on impatience.

After such an astringent and brisk opening, Kennedy’s self-penned Solitude, with keyboards and a whiff of TV-theme-music about it, was saved from sentimentality largely by jazz-rock violinist Jean-Luc Ponty – now in his seventies but still a fluent and graceful improviser. Then another Kennedy number, the pretty Melody in the Wind, written for Stéphane Grappelli and performed with oboist Dominic Kelly. Kennedy’s arrangement of ‘Nessun Dorma’ (from Puccini’s Turandot), with violinists Michael Guttman and Pieter Daniel, felt like a hammy crowd-pleaser, although there was no denying the quality of the playing – which shone more on the trio’s performance of Csardas Monti, full of playful interludes that hinted at everything from tweeting birds in the top register to bluegrass (at one point I half-expected Kennedy to whoop “yee-hah!”). 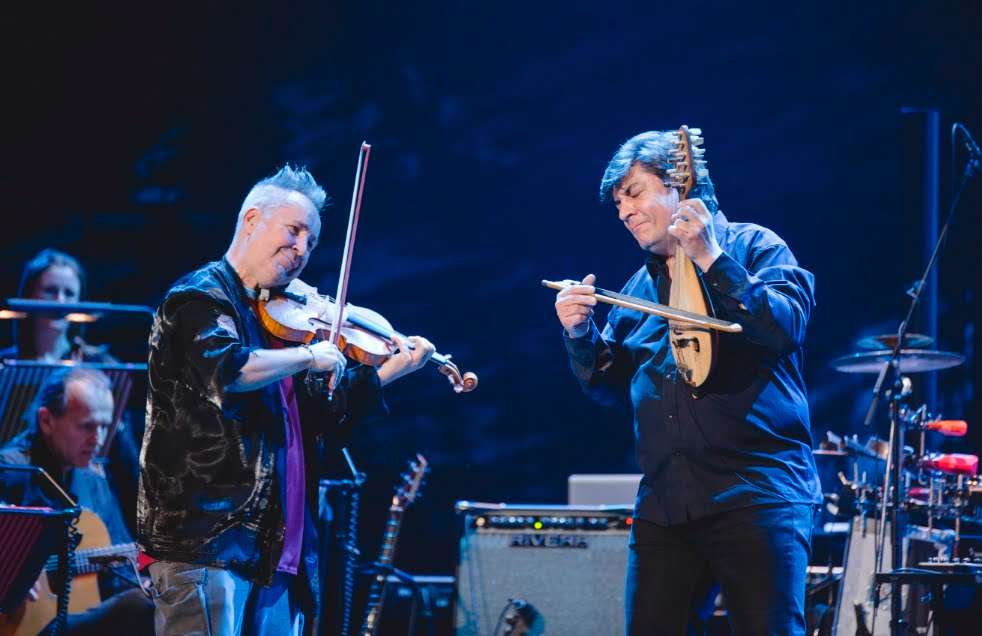 And all of this only the first set out of three, the second of which started with two duets with Georgi Andreev on gadulka, a traditional Bulgarian bowed instrument, similar in size to a violin but held to the chest and played vertically. Both Southern Seas and Aegean Dances were lively folk-sounding tunes, and while violin and gadulka differed in timbre Kennedy did an impressive job of capturing the phrasing and spirit of the music.

Then a complete change of style when Kennedy switched to electric violin and invited Ponty back, for amped-up jazz-rock fusion with Kennedy’s violin sound morphing into screaming rock guitar territory for three Ponty numbers, Cosmic Messenger and Don’t Let the World Pass You By (the first from the eponymous album, 1978) and the much more recent To and Fro (2007). 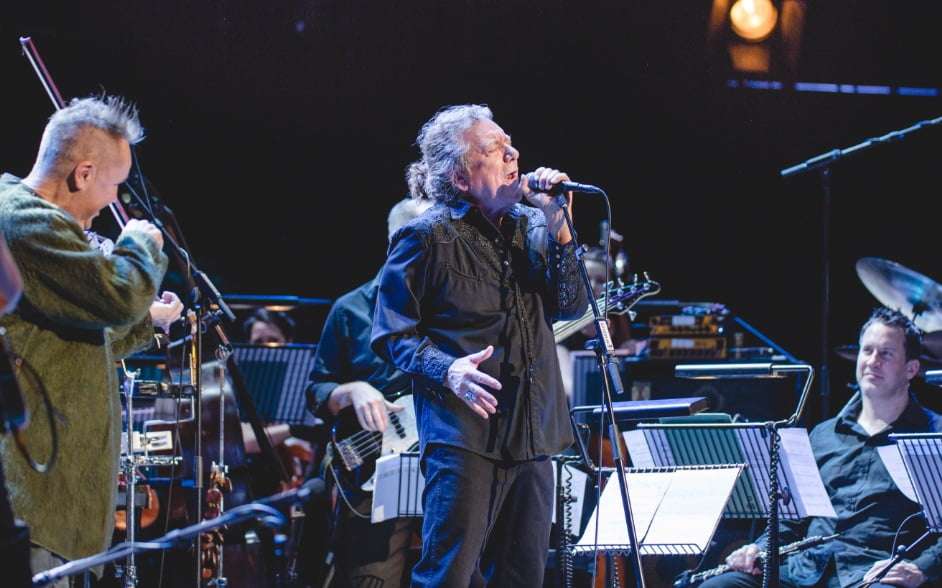 After the ear-ringing finale to the second set, you’d expect the third-set opener – an arrangement of Jimi Hendrix’s Little Wing – to be equally loud. But down came the volume for an exquisite acoustic version with strings, guitar and mandolin. Perhaps Kennedy was keeping his powder dry for the arrival of Robert Plant, who gave a thoughtful, languid, sometimes whispered and radically reconstructed version of Hey Joe deploying the full armoury of orchestra and rock instruments before the final stormer, Led Zeppelin’s Kashmir. It comes as a shock to realise that Plant is nearing seventy and I sensed that he was holding back to protect his voice, but the lion (mane tied back in a grey man-bun) can still roar.

If this huge range of musical styles inevitably felt at times like a tasting menu, the chef was like Jamie Oliver: whack in a bit of Bach, season with some Puccini and Bulgarian folk-music, pour over a generous glug of jazz-rock fusion, Hendrix and Led Zep, and lovely-jubbly. Throughout all three sets Kennedy skipped around the stage like a cheeky chappie, bridging the leaps in styles with his boundless enthusiasm. And when he kept ending pieces by jabbing the air with a congratulatory cross between a punch and flick of the wrist, I half-expected him to blurt out, “Smashed it!”. 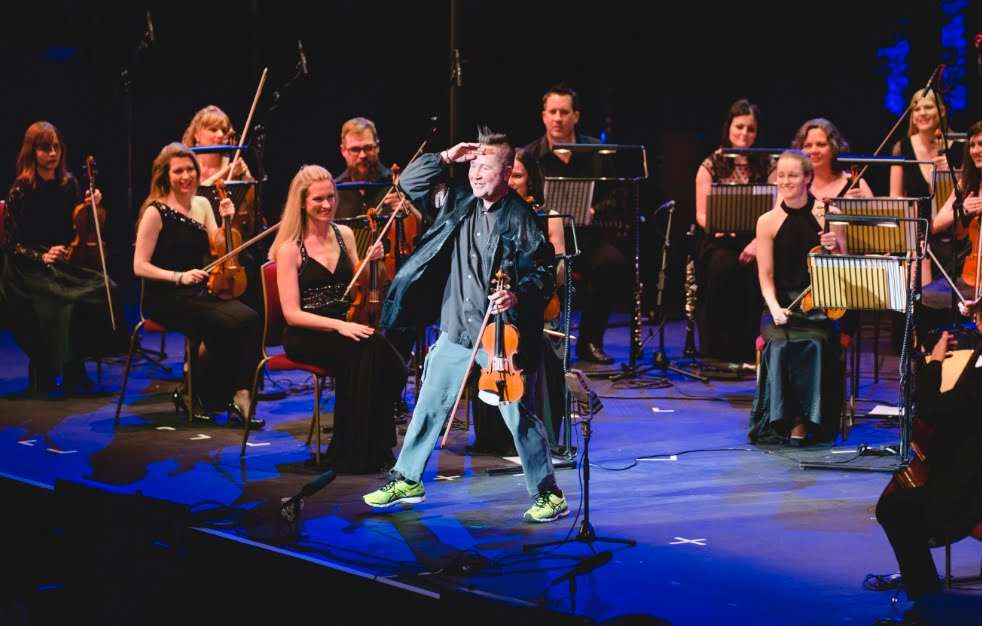 But no amount of Kennedy’s gurning and prancing could quell the one big annoyance of the evening: being kept waiting and waiting and waiting for the concert to start, especially when the official start and finish times (with two intervals) were 7.30 to 11.15. If it sounds churlish to complain about tardiness after being treated to so much music, so be it because nearly four hours is already a bum-numbing, Wagnerian length of time to hold your audience, so it’s a cheek to take so long to roll up that your audience slow-claps you before you start; and slow-claps you during the intervals. If every one of the near-capacity crowd (that’s around five thousand people, Nigel) can turn up on time, why can’t you?

It was gone 11 p.m. before the third part started, and nothing – even a full bladder – is more likely to disconcert (literally dis-concert) this reviewer than being forced to leave early to sprint across London, knotted with stress, panting with exertion and lathered with sweat, because he’s desperate not to miss his last train home. It spoilt what was otherwise a largely enjoyable evening. And I wasn’t the only one to bail out. This time I missed the encore; next time, Nigel, you risk people skipping the gig.