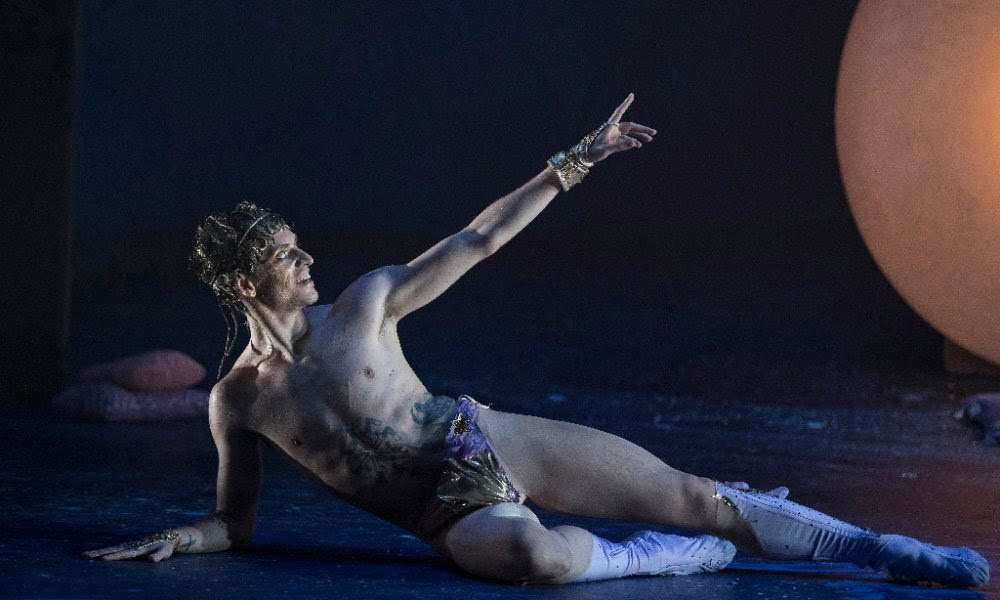 The pull of Sergei Polunin is such that the run of performances of this inaugural programme of ‘Project Polunin’ at Sadler’s Wells is sold out. He is looking good, in fine physical form and cuts a real dash, but that, in itself, is not enough – it is hard to conceive of a more ill-matched trio of works which do almost nothing to showcase his talents.

Best of all, paradoxically, Tea or Coffee, the one piece which does not feature Polunin or, indeed, his erstwhile girlfriend, The Royal Ballet and Bolshoi superstar Natalia Osipova. This work is a minor riff on family relationships by the Russian choreographer Andrey Kaydanovsky, originally staged last year at the Stanislavsky and Nemirovich-Danchenko Moscow Music Theatre, and here featuring a quartet of well-matched dancers from the Stanislavsky company. The influence of Swedish Alexander Ekman is strong, with voice-overs, sound-effects and a pot-pourri of music to which often jokey and sometimes non-sensical movements are performed. That said, the central context of a family setting is strong throughout, not least when the ‘father’ figure of Alexey Lyubimov ‘dies’, leaving a sense of loss and lack of direction in the remaining three. The ‘death’ of Anastasia Pershenkova’s ‘mother’ leads to a quartet of some poignancy, the two ‘departed’ parents interacting with and supporting the two living children. But the link with Polunin is tenuous at best, the young dancer claiming that it represents “the kind of theatre dance I am moving towards”. A pity then that he did not appear in it and has shown little aptitude for contemporary work in previous outings. 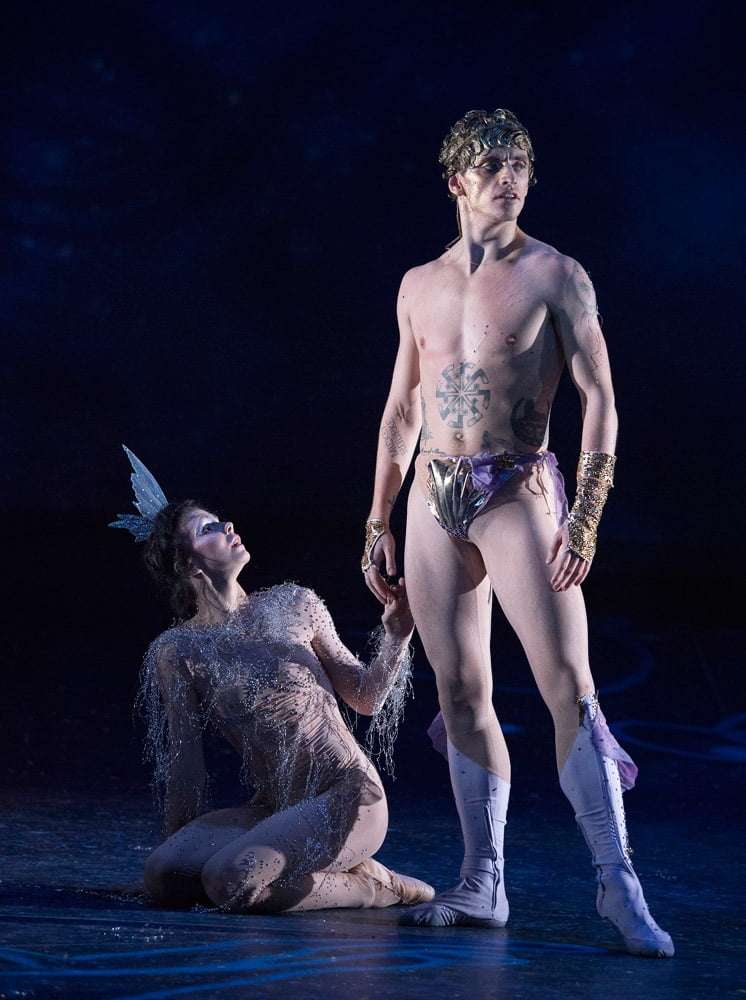 The evening opened with the inexplicable choice of Vladimir Vasiliev’s 1978 Icarus, The night before the Flight, mercifully just an excerpt from a longer work. Vasiliev was a prodigious dancer, star of the Bolshoi and recipient of the accolade ‘Dieu de la Danse’, but he was and is not a choreographer of note; it is difficult to see why Polunin should have chosen to perform something of his to represent his ‘past’, given that there had been until now almost no contact at all between the two men. But the pull of a role danced by one of the greats is always strong, as shown by the queue of male dancers eager to don the costumes of Nijinsky’s created roles, and this excerpt also features Aeola, a role originally taken by Vasiliev’s late wife and equally gifted dancer, Ekaterina Maximova. Natalia Osipova thus appears alongside her Sergei, as the governor’s daughter who begs Icarus to give up on his inaugural flight the following morning. It is all heroics and anguish, a mightily Soviet mish-mash of yearning arms, heroic poses, flashy leaps and dazzling turns, performed with impressive aplomb by the star couple, and as set in its time as firmly as a fly in Baltic amber.

If Narcissus and Echo represents Polunin’s future, then that will be on a cruise ship; a more overblown, camp, kitsch work would be hard to find, the product of a legion of designers, advisers and assistants, wholly lacking in coherent artistic thought. We are in a celestial setting, replete with clouds, glowing planets, swirling galaxies and the zodiacal constellations, a stage picture reminiscent of the allegorical ballets of the 1930-50s and not unattractive in itself, even if it clearly indicates that the work will be anything but cutting-edge. Costuming is Follies Bergères-cum-New-York bath-house, a riot of campery in which the five male dancers (Polunin and four mildly-embarrassed-looking others, including one poor lad sporting a mythological jock-strap) are kitted out in nude tights and wisps of material, Polunin himself adorned with spangly wrist cuffs and posing pouch, and sporting natty pale lilac bootees. Five nymphs are a homage to Pan’s People, icons of the 70s, although more scantily clad, a waste, given that the Theban boys seem not to know what to do with nymphs, and appear more at home with each other. Natalia Osipova as Echo wears a sparkling body suit with thin fronds which float around her. 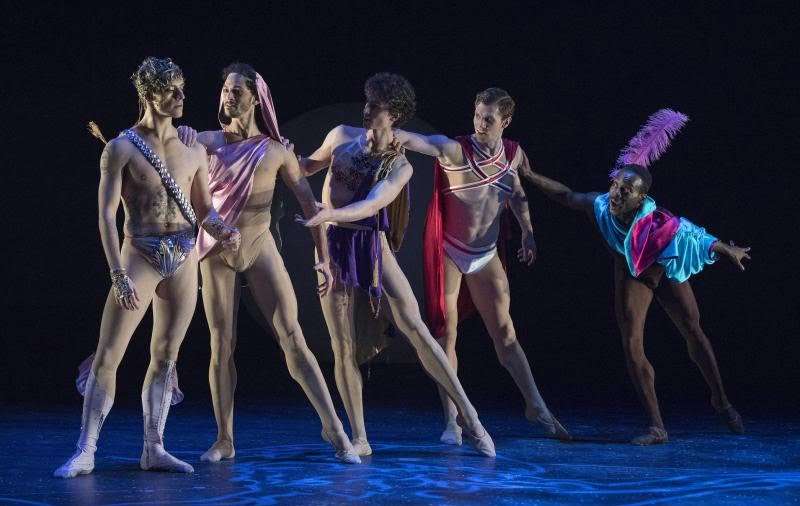 Several choreographers, including Polunin, are credited with the movement, which comprises empty, hollow gesturing – Osipova as Echo does a good line in anguish after Narcissus has spurned her in favour of himself – or athletic leaping and spinning. The choreography is stock, devoid of anything new or startling, a patchwork of familiar moves which says or does nothing of interest. The concept of this inexplicable undertaking is by Ilan Eshkeri, who is also the composer of its serviceable, if distinctly middle-of-the-road score, is shaky: the tale of Echo and Narcissus from Ovid’s Metamorphoses, with the cursed Echo able only to finish a sentence but not start it, and her post-rejection transformation into a voice alone, is challenging for a form in which the artists do not speak or sing. Nor is the interaction between the two easily shown in danced pas de deux — Polunin and Osipova execute a dull duet which culminates in his simply walking away. 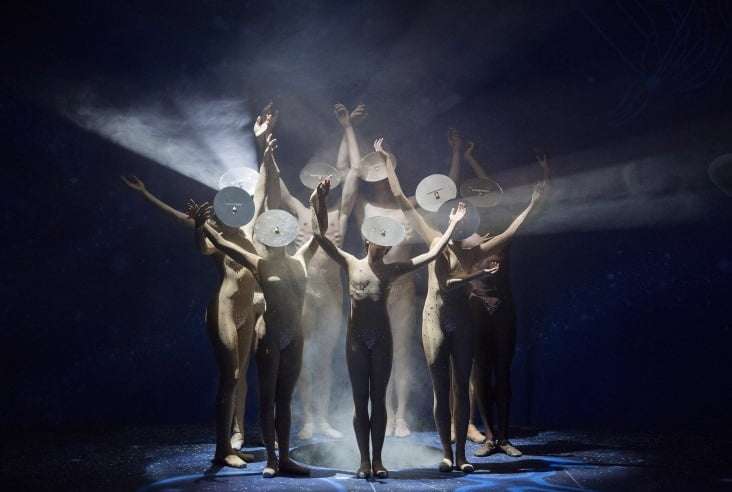 Eshkeri states that the story is supremely relevant in our digital age, with photoshopped and idealised versions of ourselves preserved forever in the virtual cloud. The pool in which Narcissus sees his reflection is now a smoking crater at the back of the stage, (Eshkeri sees it as a metaphor for social media) so we see endless images of Polunin on the video screens which first represented galaxies. There could be mileage in such an interpretation, but in such a resolutely retro-kitsch setting, video imagery simply does not work – it needs something more creative, more contemporary. Narcissus and Echo comes across as having been a plaything for many individuals, but not the dancers – it is a sorry and clearly costly undertaking which does no-one any favours.

Sergei Polunin, the ‘James Dean’ or ‘Bad Boy’ of ballet, depending on which sub-editor’s strap-line one reads, is not a Narcissus; he is not someone obsessed with himself and his image. Some will see this first programme of Project Polunin as an exercise in self-aggrandisement, but that would be to misread this hugely talented young man. If anything he is more Icarus, launching himself into the void of public and critical scrutiny on insubstantial wings of feathers and wax, and we all know the end of that story.