Orchestra of the Age of Enlightenment
John Butt (director & organ) 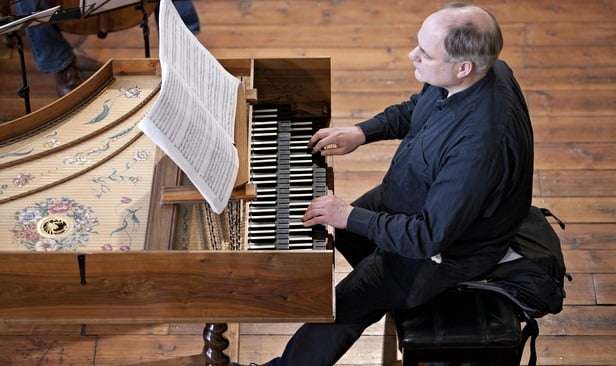 Vivaldi may be famed for the vast number of his Concertos, many of which utilise an array of different and unusual instruments, either alone or in ensemble. But north of the Alps his slightly younger German contemporaries Telemann and Handel were equally resourceful in adapting their music imaginations to the requirements of putting various timbres into the spotlight.

Nobody is certain what Telemann meant exactly by using the term violetta in his Double Concerto in G – whether an already older type of instrument such as a treble viol or a variant of the viola d’amore, or instead simply the modern viola (as we still know it) as suggested by some commentators at the time. The Orchestra of the Age of Enlightenment settled for the latter in this context, Simone Jandl and Max Mandel providing a warmly resonant tone throughout the four movements which particularly suited the gentle – but not languid – charm of the opening Avec douceur and the parallel melodic chains of the amorous Largo. The Finale encompasses the rhythmic vigour of a rustic dance, but John Butt’s direction from the harpsichord overlaid it with an aura of gracefulness.

Telemann consciously pitted old and new together in the Concerto for Recorder and Flute but, despite the rarefied quality of those instruments’ sounds, this is withal a more distinct and robust work. The supple playing of Rachel Beckett and Lisa Beznosiuk complemented the OAE’s role, which was gravely purposeful in the Allegro and earthy in the Polish folk-music-inspired Finale. The luminous accompaniment by the strings in the opening Largo, with the rippling dialogue of the two soloists, was hypnotic in effect. The even more arcane combination of oboe d’amore, viola d’amore, and flute in the E-major Concerto offered timbres that were like the delicate shades of a watercolour painting, contrasting with the strings’ gentle throbbing and the twinkling harpsichord accompaniment of the opening Andante, and evoking the domestic world of a Trio-Sonata in the more intimate ‘Siciliana’. Nevertheless Katharina Spreckelsen, Huw Daniel, and Beznosiuk still charmed the OAE and guided it, not least in their humorous flourishes at the end of an episode in the Finale which then galvanised the orchestra for the concluding ritornellos.

Handel pioneered the genre of the Organ Concerto, exploiting his virtuosity to draw additional attention to his Oratorio productions when such works were performed during the intervals. The first Concerto of each of his published sets was given here (albeit that Opus 7 was assembled posthumously). I was not as impressed by the positive organ used, as the enthusiastic comments Butt made about it, suggested one should be (known as the “Bach 2000 Organ”, it was constructed by Robin Jennings for John Eliot Gardiner’s Cantata Pilgrimage in that year). At any rate it was not at all prominent in the tutti sections, and more depth would have been ideal for the solo passages. Both performances from Butt were brisk, effacing much sense of majesty or grandeur – required at least for the passacaglia opening of Opus 7/1 – but that ensured enticing playfulness elsewhere, such as in the concluding ‘Bourrée’, the OAE’s interjections of paired chords wittily punctuating, and the players’ phrases at the start of Opus 4/1 were choppy if not overtly brusque, and the closing Andante too swift.

Each half opened with an Overture by Handel. That to Alexander’s Feast was dignified, the longer, four-movement Sinfonia to Saul poised but vivacious.