Orchestra of the Age of Enlightenment
David Zinman 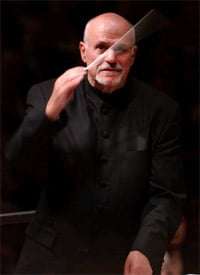 “Not all orchestras are the same”, proclaims Orchestra of the Age of Enlightenment’s marketing; on the basis of this Queen Elizabeth Hall concert conducted by David Zinman, it is hard to disagree. What, with other groups, may have been merely a pleasant hour-and-a half in the genial company of three early-19th-century German Romantics became a vivid, life-affirming experience bursting with vibrant colours, rhythms and textures.

The highlight was Anthony Pay’s spellbinding account of Weber’s F minor Clarinet Concerto. David Zinman, making his debut with OAE, wrung every ounce of drama from the cloak-and-dagger introduction, from which Pay’s sinuous tone emerged like an operatic diva taking the stage. The concerto’s first movement indeed resembles an opera scena, full of light and shade – and fiendish displays of rapid coloratura, which Pay brought off with assured command. He really is master of his period-instrument, making astonishing light work of the technical demands with far fewer of the external keys which make things easier on modern instruments. The shimmering Andante had a beautiful singing line, Pay making the most of its kinship to a tender aria. Especially magical were the passages in which the clarinet is accompanied solely by three superbly hand-stopped horns. Pay lightly tripped his way through the capricious finale, bringing a subtly different character to each of the dance-like episodes, and dazzling with flashes of virtuosic brilliance. What helped make this performance so special was the responsive orchestral contribution.

The selections from Mendelssohn’s music for “A Midsummer Night’s Dream” opened with wind chords that were wonderfully crystal-clear, unanimous and well-balanced – instantly evocative of Shakespeare’s dream-world. Well-characterised with pungent colours and scampering strings, the Overture was underpinned by an especially rich and dynamic double bass line. The ‘Intermezzo’ and ‘Nocturne’ featured delicately flowing lines, and intense passion in their soaring melodies. The crisply-precise ‘Scherzo’ formed a satisfying conclusion.

The first movement of Beethoven’s Symphony No.7 was breathtakingly exhilarating, frequently driven by the OAE’s four gloriously blazing horns. Zinman worked the players hard, extracting a pound of flesh from the Second Violins particularly, their often-manic lines brought out to electrifying effect.Idiosyncratically, if not alone in doing so, Zinman plunged straight into the opening chords of the slow movement with barely a second’s pause after the rousing conclusion of the first. This had a proudly unsettling effect. Having been deprived of the chance to savour the climax of the first movement, I spent much of the Allegretto feeling cheated, unable to adjust to the new mood. The scherzo motored along at a thrilling pace and the OAE played its collective socks off in Beethoven’s relentlessly gruelling finale, heroically keeping the momentum going and generating terrific excitement. The final blaze from the magnificent trumpets of David Blackadder and company was spine-tingling. As applause erupted from the packed house, many of the players beamed delightedly with shell-shocked pleasure, as if not quite believing they’d pulled off such a triumph.