On the Twentieth Century

Musical comedy with music by Cy Coleman, book & lyrics by Betty Comden & Adolph Green, based on the play Twentieth Century by Ben Hecht and Charles MacArthur based on Napoleon of Broadway by Charles Bruce Millholland 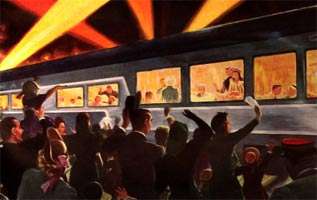 The origins of the musical “On the Twentieth Century” lie in a 1930s’ play by Charles Bruce Millholland which was inspired by the life of theatre producer David Belasco. The play was unproduced but provided the inspiration for Ben Hecht and Charles MacArthur’s 1932 play “Twentieth Century”, directed by George Abbott. It ran for some 150 performances and two years later was filmed by director Howard Hawks with John Barrymore as Oscar and Carole Lombard as Lily. The play was revived in 1950 when Jose Ferrer directed himself and Gloria Swanson in the leading roles, and again in 2004 with Alec Baldwin and Anne Heche; and has appeared three times on US television: in 1949 with Fredric March and Lili Palmer, in 1953 with Fred Clark and Constance Bennett, and in 1956 with Orson Welles and Betty Grable. The musical adaptation directed by Harold Prince opened in 1978, with John Cullum, Madeline Kahn (later replaced by Judy Kaye), Imogene Coca and Kevin Kline and it ran for nearly 500 performances. The London production with Keith Michell and Julia McKenzie managed only 165 performances in 1980 at Her Majesty’s Theatre. It was revived in London at the Bridewell Theatre, off Fleet Street, in 2004 with Kathryn Evans as Lily Garland.

In writing the book Comden & Green set out to capture the feeling of Howard Hawks’s film, which was full of screwball comedy. Veterans of both film and stage work, they had written “Good News”, “On the Town”, “The Barkleys of Broadway”, “Singin’ in the Rain”, “The Band Wagon”, “It’s Always Fair Weather”, “Wonderful Town” and “Bells Are Ringing”. Composer Cy Coleman was at first reluctant to do a 1920s’ pastiche, but he was persuaded by the force of the personalities of those involved and finally produced a score that mixed operetta-style music with 1930s’ jazz rhythms. This may be why the show has not enjoyed any really long runs, falling between farcical operetta and madcap musical comedy. 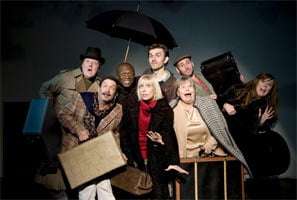 That said, it does have some good things going for it. The story is a satire on Broadway and in particular Oscar Jaffee, a highly successful producer now down on his luck. He plans to sign his former lover Lily Garland, a film star, to appear in his latest show, “The Passion of Mary Magdalene”, but he has to fight off her current beau Bruce Granit and rival producer Max Jacobs. Oscar finds out that Lily will be on board the Twentieth Century train en route to appear in a new show by Jacobs. Most of the action takes place on the train as Oscar tries to nail Lily’s signature. However, there are other characters to contend with, namely a trainload of budding playwrights and a religious maniac who seemingly wants to give all her money to Oscar to fund his Mary Magdalene show.

The cast gives its all in a non-stop display of energy. Although there is nobody to like – are all out for what they can get – Howard Samuels is credible as the conniving Jaffee, while Rebecca Vere recreates the sort of luminosity that Carole Lombard possessed. Robbie Scotcher as her new love Bruce Granit lives up to his name, playing him as solid as an immovable rock. Valda Aviks as Letitia Primrose, the religious maniac, has the best number, ‘Repent’, in which she reports all the “dirty doings going on” in the world. The riposte is to announce that ‘She’s a Nut’ in the show’s next-best number. The title-song evokes the train as its speeds through the night and, without a formal set, apart from a couple of typical farce-like doors that are put to constant use, the train journey is cleverly evoked using a collection of suitcases and hat boxes.

The score is arranged by Oliver Jackson for piano and saxophone quartet which works remarkably well, lending the proceedings an extra madcap, cartoon-like element. Director Ryan McBryde never lets the pace flag and, even if we cannot care about these ghastly showbiz types, there is a lot of fun to be enjoyed.