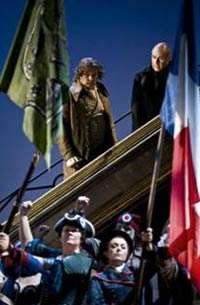 This was the final performance of the season of Royal Opera Stockholm’s new production of Giordano’s verismo opera, its first production since the Swedish premiere of the piece in 1909. The house was sold-out, and the performance was a good example of a cast largely drawn from the house ensemble delivering a hugely satisfying evening. The bright stage designs of Hartmut Schörghofer are dominated by a huge and rotating gilded picture frame. This can be stationed perpendicularly to designate the rigidity of the old aristocratic society order that we see in Act One, and then tilted at angles to provide a sense of disorder and chaos of the French Revolution, and Terror that provides the political background to the love-triangle that is the story. It also served as a good scaffold for other scenic variations. Corinna Crome’s elaborate and bright costumes brought additional colour to the stage, and allowed easy identification of the principals. If Dmitri Bertman’s direction did not spotlight any hitherto uncovered facets to the simple plot, then at least it did deliver the piece intact and without any irrelevant directorial impositions. If playing up the eccentricities of the old Countess to such an extent jarred slightly, elsewhere the big characters were allowed their moments in the spotlight without distracting excess.

The success of any performance of “Andrea Chénier” really does fall on the shoulders of the singer in the title role – without an attractive, sizeable, fluid and charismatic tenor voice and a sense of vocal improvisation there is not much point starting. If the singer has these qualities and a big stage presence then you are 75 per cent there. Lars Cleveman, long a member of the Stockholm company, has developed his career markedly in the past few years, taking on many of the most demanding tenor roles of the operatic repertoire; Siegfried and Tristan as well as Don Carlos. He now possesses a voice of heft and muscle, a good sense of line, and one can be sure that the top notes will be there, utterly secure. At his first appearance in Act One he did rather emerge from the crowd, as the plot indicates, and only gradually took his place at the centre of the drama. Perhaps his stage demeanour is not the most relaxed, and one could not say he was the most extrovert of poets nor demonstrative of lovers – a smile and more variety in facial expression would help. That being said it was still a creditable performance and ‘Si, fui soldato’ found him at his fiery best. 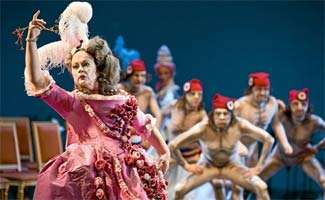 Maddalena was Angela Rotondo. She has an attractive stage presence, strongly expressive eyes and the top of her voice is also very exciting both in terms of quality and passionate force. At times the various registers did not seem entirely integrated. Nevertheless, it was a strong performance; she managed to make this potentially rather passive character into something more than that, and ‘La mamma morta’ was well judged in control of its initial reflective passages, burgeoning into the agitated pleading at its conclusion. As the ‘loser’ of the love triangle Carlo Gérard, Jeremy Carpenter also gave a strong performance, although his beautiful and warm-coloured voice lacked the amplitude of Cleveman and Rotondo. It also lacked penetrative power at some crucial moments such as Gérard’s appearance before the crowd in Act Two. Here the baritone really needs to soar over the chorus and orchestra. The same was true of the final rousing moments of ‘Nemico della Patria?’, though it still stopped the show. His tall stature guaranteed that he dominated scenes where he was present, and his portrayal of the revolutionary with a heart and conscience was touching.

There were some impressive cameos too. The ever-versatile Marianne Eklöf doubled-up as the Countess and Madelon, gamely depicting the eccentric excess of the former, and then completely stealing her scene in the courtroom – and really singing the latter. Monika Mannerström Skog was a Bersi of individuality, and Magnus Kyhle differentiated his two roles with skill. The chorus-members were a strong voiced and a charismatic set of observers of the action.

Pier Giorgio Morandi kept the pace of the piece going and neither over-pointed nor over-indulged the big moments. The result was therefore strongly idiomatic – and the players seemed to respond well, producing washes of burnished sound and romantic swirl; heady stuff.