Verdi
Simon Boccanegra – Opera in a prologue and three acts to a libretto by Francesco Maria Piave (with additions by Giuseppe Montanelli) after the play by Antonio Garcia Gutiérrez revised by Arrigo Boito [Revised Version; sung in Italian with German surtitles] 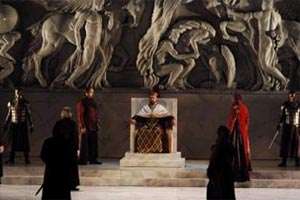 The story of “Simon Boccanegra” can too easily become complicated and hard to follow when interventist directors impose their ideas. Fortunately, Zurich Opera’s offering is a straightforward telling. Tidy, traditional sets, in keeping with the opera’s period, supported the players. The only letdown was the acting, which was hammy, bordering on comical; a sword-fighting scene between the warring Plebians and Patricians barely stuttered to life.

There was some magnificent, powerful singing, which in a medium-sized auditorium such as this, heightened the thrill, and gave immediacy to what is an intimate story of family squabbles told through the tough political life of the old Doge of Genoa (Simon Boccanegra) and his life-long foe Fiesco. 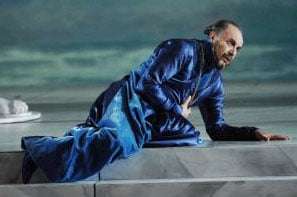 As the reluctant Doge, Leo Nucci brought authority to the part, as well as humility, exemplifying the skill required to be Doge for 25 years. Nucci knows how to dominate any opera house, and he was unafraid to show off his talents to great effect: his last pronouncement in the first act’s first scene – ‘Il voglio’ (It is my will) – was held for a full eight seconds; usually it is on the beat. This Doge had stature and command.

Simon’s daughter Maria, known as Amelia Grimaldi for political reasons, was sung with some difficulty by Isabel Rey. She could not compete with the other voices, and consequently was timid in character; there was no beauty to the line; legato lacking. Her suitor, Gabriele Adorno (sung by 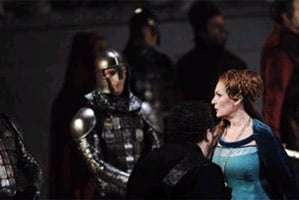 Roberto de Biasio) however, was the most stunning voice on show. His tenor was big, strong, and had that all-too-rare ability to ring clearly with ardour. His Act One duet with Rey found his voice dancing and joyous. His high notes were wide open and transparent.

De Biasio was superb when set against the bass Massimo Cavalletti, who sang his friend (though they fall out) Paolo Albiani. In Act Two the pair have to decide where their loyalties lie; Gabriele sides with the Doge, and Paolo resolves to join Jacopo Fiesco (who assumes the name Andrea) and overthrow the Doge. This conflict between the pair allowed a degree of competition, Cavalletti’s black bass shining through with evil cunning. In the Council Chamber scene Paolo is compelled to curse himself – ‘Sia maledetto’ 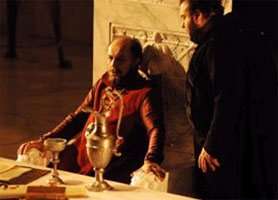 (May he be accursed) – and in those couple of words Cavalletti evoked the turmoil and resolve of his situation. Paolo’s Act Three confession to Andrea (that he has posioned the Doge) dripped with bile. Overall, Cavalletti’s potrayal of Paolo, and de Biasio’s of Gabriele, were as complete as one could hope for.

László Polgár sang the bass part of Jacopo Fiesco/Andrea. ‘Il lacerato spirito’ (The tormented spirit) was determined and showed a man who does not want to be broken. His final duet with Nucci found the pair in voices of acceptance and a will to do better for everyone.

Carlo Rizzi led an account of the score that shimmered as does the sea, yet which whipped up turmoil and urgency, such as the opening of Act Three. Above all, it was the moments of calm that persuaded most. The close of Act One contained such treats as heraldic brass calls and a soulful bass clarinet solo; all this added to what was an Italian-sounding account of Verdi’s score.

There were some wonderful effects; a projected sea-scape, with clouds and a beautiful blue sky, mirrored what Simon finds so captivating about the water. It was seductive, and taken with everything else seen and heard, made for an exciting evening at the opera.