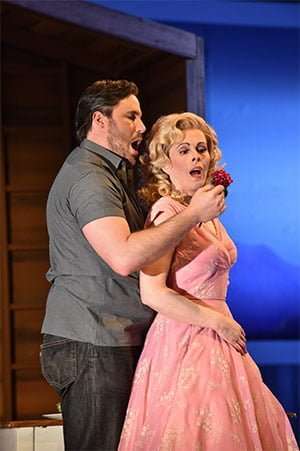 It is ten years since Opera Holland Park last produced La fanciulla del West, a decade in which the company has gone from strength to strength and Puccini’s (for some people) disconcertingly through-composed score has enjoyed more frequent revival. It’s anyone’s guess what ENO’s forthcoming staging will look like, given the involvement of Richard Jones, but that production will be sung in English and will boast a powerhouse Wagnerian heroine. With the pluses and minuses of OHP’s unique performance space (the shallow stage can be a problem as can the absence of a pit), director Stephen Barlow and designer Yannis Thavoris stick with Italian (praise be) while eschewing mid-19th-century cowboy realism in favour of a fantastical 1950s makeover.

We are relocated to Nevada or New Mexico or thereabouts where America has just tested a nuclear device. A fake newsreel prefaces the performance proper. The conceit adds little of substance but turns out to work well enough on a decorative level, the sets being sleek and economical and the costuming fabulous. The miners have become workers at the atomic research plant, shadowed by army men or militia (at one point seen with the confederate flag). The near-contemporaneous advent of Irving Berlin’s Annie Get Your Gun (stage and screen) has given the team permission to dress some of the characters in a lurid fantasy version of Wild West kit. Minnie herself is first revealed as a show-stopping Betty Hutton figure in scarlet (which may or may not square with her virginal, bible-reading persona). All three Acts are played before a mountain panorama running the length of the stage – just a photograph. A modest grey slatted set and some period paraphernalia suggests the bar in Act One with Minnie’s hut in Act Two something akin to serviced motel accommodation. The finale has even less in the way of clutter, its final coup de théâtre accomplished by lighting alone plus a dinky set of portable steps. The lovebirds are seen leaving on a jet-plane for what seems likely to be an uncertain future. 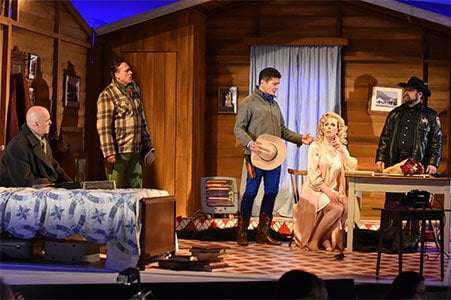 Six years after Madama Butterfly, Puccini was plainly besotted with Debussy both texturally and harmonically and it is not always easy to square what is happening in the plot, designed to appeal to a Metropolitan Opera House audience of 1910, with the sophistication and delicacy of a piece in which the arias are, as my companion put it, “all in the orchestra”, presumably the reason why the opera has never quite enjoyed the popularity of Tosca, La bohème and the rest. There are touches of national colour, ragtime for the ‘miners’ and quasi-Spanish patterns for Dick Johnson and his Mexican bandits, neither made much of by Stephen Barlow and colleagues.

Fanciulla is often said to require too many great singers – there are as many as seventeen named roles – and the central figure of Minnie is certainly a challenge. Susannah Glanville, whose credits include a run of US performances of Blanche in André Previn’s A Streetcar Named Desire, brought something other than sheer heft to the role. The spotlight is rarely off – she more than sheriff Jack Rance is the dominant figure of this community – and Glanville rose to the challenge. Puccini does his best to portray a conflicted character, a hard woman yielding to tender emotion, a kindly Amazonian moralist adept at belting out the exposed top notes (of which only the very first went somewhat awry on first night). It might not make sense – she is almost the only woman in the piece – but this is opera after all. Also making his debut at OHP is a young American tenor of great vocal potential and an unpronounceable name, Jeff Gwaltney. He certainly seemed credible, suitably tall if not noticeably Hispanic-looking or Italian-sounding as the dashingly handsome Dick Johnson (the baddie Ramerrez), another dodgy Pinkerton type. His rival for Minnie’s affections, Tasmanian-born Simon Thorpe as Jack Rance, was here a paradoxical, older figure, not merely a bully but one whose chief crime is to love without return. The production had him attempting to phone for help at one point and it mattered little that he lacked that big villainous, Scarpia sound. In an opera with as many cameos as Prokofiev’s War and Peace, OHP stalwart Nicholas Garrett shone vocally as the well-intentioned Sonora.

Stuart Stratford conducted a City of London Sinfonia on peak form. Having secured amazingly precise work in Philip Glass’s stupefyingly repetitive Satyagraha at ENO, he was equally impressive here in a brand of lyricism that could scarcely be more different. The dynamic range was huge, the impressionistic detail revelatory. Getting real warmth from a reduced ensemble cannot be easy when there is also a risk that the singers will be swamped, yet the balance was fine. Puccini’s avoidance of set-piece arias has never mattered less. Only the nth degree of momentum was lacking, the melodrama perhaps deliberately undersold, all concerned apparently in love with the score. In short, the show should emerge as yet another triumph for OHP where the compactness of the venue enhances immediacy and the intrusions of local wildlife are all part of a feel-good experience. Do try and catch it.