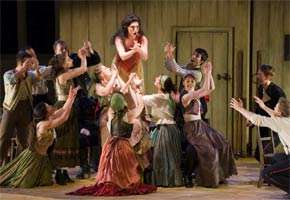 This must be the sparest “Carmen” I have seen, and certainly one of the most minimalist productions Opera Holland Park has mounted. Director Jonathan Munby just about gets away with his raised platform, a couple of movable wooden walls and various props, with the façade of Holland House doing duty as one side of a sun-baked plaza, but in a staunchly traditional production he and his designer could have run to a bit more Spanish colour – Carmen doesn’t even get to wear a mantilla in the last act, always a touching moment as she attempts to convince the world and herself that, on the arm of Escamillo, she is now a ‘laydee’ – a proto-footballer’s wag. Some of the chorus movement was a bit on the minimalist side, too – some stagings go way over the top with the irritating children buzzing round the soldiers in Act One, but to have them sitting down to sing is a bit wan. 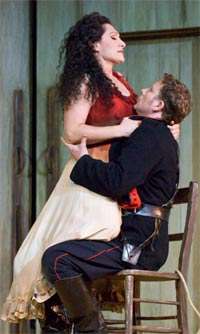 On the music side, things were much better. Tara Venditti’s Carmen – a strong, sexy siren with an equally strong feel for Carmen as uncompromising outsider, who can’t help bringing chaos in her wake. Some Carmens don’t get much further than heaving bosoms and flashing eyes – Venditti didn’t lack in that department, but she was also interestingly feral and manipulative. Her singing had a sort of world-weary voluptuousness, and she was impressively in control of the Tavern act.

Seán Ruane (Cavaradossi in OHP’s wonderful “Tosca” two years ago) sang with exemplary lyrical, cultivated tone and was convincingly vulnerable. He was less convincing, though, as a man who would throw himself into Carmen’s boundary-free world with almost masochistic acquiescence. The ‘Flower Song’ in Act Two, beautifully sung though it was, didn’t go the extra mile in terms of desperate, nihilistic abandonment, which he got near to finding after the interval in a totally believable portrait of a man destroyed by jealousy. The murder was brilliantly effective.

David Stephenson, cutting a sinuous figure as Escamillo in his toreador’s lights, visually justified José’s jealousy, but his voice doesn’t have the weight and darkness the role needs. Julia Sporsen’s light pure soprano suited Micaëla well, and she was assertive enough to create a strong polarity between her and Carmen.

The chorus was on cracking form, and Matthew Willis (his OHP debut) brought Bizet’s wonderful score vividly to life – his beat had a bounce, and the orchestra clearly enjoyed playing for him.