Wagner
Das Rheingold – the preliminary evening to Der Ring des Nibelungen – music-drama in four scenes to a libretto by the composer [concert staging; sung in German with English surtitles] 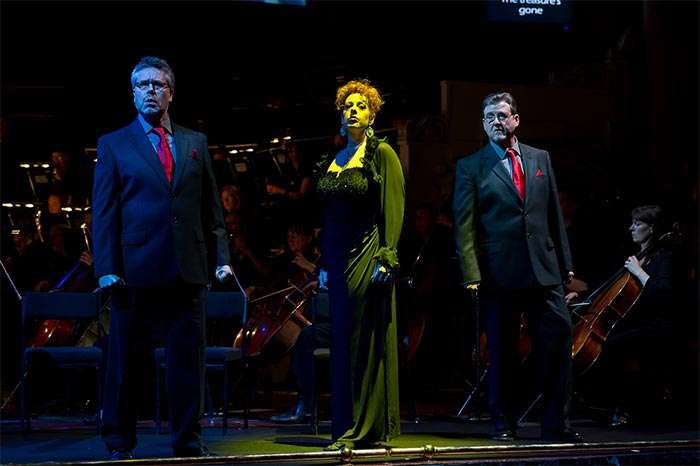 There must have been many in the capacity audience for the opening part in Opera North’s concert staging of Wagner’s ‘Ring’ cycle for whom the line-up of a compromised god, his dodgy deals, his shadowy cabinet of ineffectual or untrustworthy minor deities, and his nemesis waiting in the wings drew an eerie parallel with our current political implosion. The impression was fostered by the directness of Peter Mumford’s excellent staging, titling and video, the latter two projected onto three big screens behind the orchestra. Not only did they give us Simon Rees’s English surtitles, they also showed the narrative of what was going on between the four scenes as well as giving enough back-story for the bare bones of the ‘Ring’ myth. With the main films of atmospheric water, clouds, mist and mountains, the effect may not have been quite the total artwork of Wagner’s dreams, but it all bowled along with the directness of a graphic novel.

The singers performed on a platform in front of the orchestra, with plenty of interaction and movement – the Rhinemaidens’ droopy round-dances and nifty dismissals of Alberich worked well, and Loge’s deviousness was persuasively plotted. I missed Wotan not having a spear, nor Alberich (briefly) the ring itself – with the sword, these are probably the only props you need for the whole cycle – but I’ll get over it. 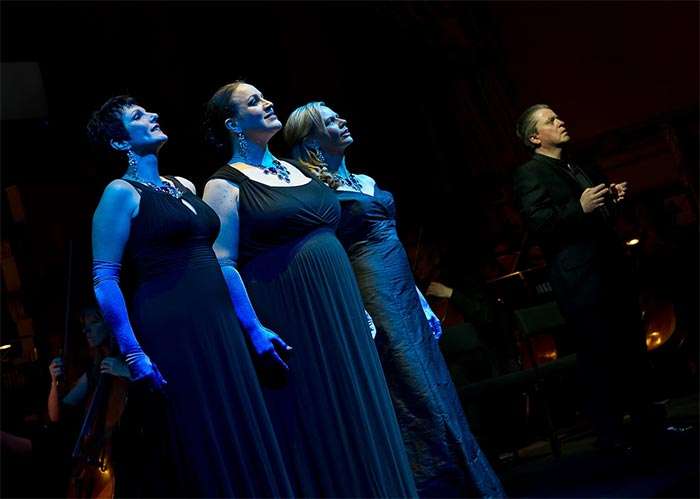 The cartoonish presentation was heightened not just by some gleefully robust characterisation, but also by Richard Farnes’s conducting, which grabbed from the very start, an unscripted fortissimo in the Prelude, depicting the Rhine, notwithstanding. His approach and its results were full of air, with generally buoyant tempos and a marked transparency of texture. The various leitmotifs and the rapid changes of mood and direction came, as it were, with labels attached, more to be quickly assimilated into the subconscious than clamouring individually for attention. More than anything, Farnes and his musicians coloured the action with generous and descriptive detail, to a degree that had you wondering what playing and conducting of this calibre would make of the emotional depth-charges to come. With such vivid music-making and the no-nonsense staging, all the Vorabend’s scene-setting stuck in a way that you felt Wagner would have applauded.

The Rhinemaidens made their entry in style, with Jeni Bern’s silvery Woglinde matched by Madeleine Shaw’s come-hither Wellgunde and Sarah Castle’s lustrous, cautionary Flosshilde. Michal Druiett’s Wotan, cast as a caricature Victorian self-satisfied plutocrat, was powerfully sung, and Yvonne Howard’s needling Fricka was a nervous consort. Jo Pohlheim’s Alberich was a triumph, quickly laying down the darkness Alberich needs in the later operas, and on the basis of his excellent account here, I greatly look forward to the further appearance of Richard Roberts’s Mime.

Wolfgang Ablinger-Sperrhacke gave a great comic-camp turn as the devious Loge, which didn’t drop a stitch of nuance. James Cresswell didn’t have quite the darkness for Fasolt but this was compensated by Mats Almgren’s sepulchral presence as Fafner. Mark Le Brocq’s Froh was disarmingly effete, and Andrew Foster-Williams summoned up Donner’s storm in style. Giselle Allen was a radiant Freia, and Ceri Williams sounded gratifyingly minatory as Erda. The image of Siegmund’s sword loomed out of the Rainbow Bridge’s wash of colour as Farnes and the Opera North Orchestra delivered a brilliant depiction of the gods’ uneasy confidence as they moved into Valhalla.