This Orchestra Mozart concert – the first of this season’s Shell Classic International presentations – went through several amendments of artists and repertoire. Initially it was Claudio Abbado conducting symphonies by Haydn (94, ‘Surprise’) and Mozart (36, ‘Linz’) with the latter’s Piano Concerto No.9 (K271) as centrepiece, the soloist being Maria João Pires. Then Martha Argerich replaced Pires in that same concerto and the symphonies were changed to Haydn 104 and Beethoven 4. There was further alteration when the whole was turned into a Beethoven evening, still with Abbado and Argerich, the overture added, the symphony retained, and now with Piano Concerto No.1 installed. Then Abbado’s indisposition led to Argerich’s withdrawal. So Bernard Haitink was engaged and that saw the return of Pires who now went up a number in terms of Ludwig van’s piano concertos even if it was written before that known as No.1 if published after it. 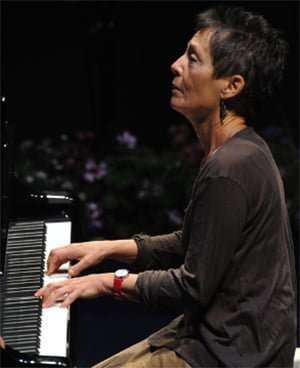 Pires and Haitink have developed a notable rapport in recent years, especially with the LSO as far as London concert-goers are concerned, and they played B flat Beethoven as recently as February in the Barbican. Their closeness was again in evidence in the Royal Festival Hall, Pires subtly beguiling us into a sparkling world of Haydnesque mischief as redefined so inimitably by Beethoven. Haitink began the concerto in bracing if malleable style, Orchestra Mozart’s response deft and characterful; we knew where the accents occur, we were spellbound by the lyrical lines. Enter Pires with poise and clarity – and a complete lack of point-making. Her control of phrases and dynamics is the art that conceals art and she displayed total innateness with the music, the Dutch maestro and Bologna-founded Orchestra Mozart supporting and interacting in the most delightful way. This work is not all about pleasantries though, for although the finale can be fun – and was frolicsome here – the first-movement cadenza (added later) is quizzical and points to the composer’s ‘middle’ and even his ‘late’ periods, and the slow movement is a deep utterance; Pires, Haitink and Orchestra Mozart searched its soul without making it obvious.

Orchestra Mozart was formed in 2004 and Claudio Abbado is its Artistic Director. It’s an international and starry ensemble. Many of the musicians are or have been members in the greatest orchestras – the Berlin and Vienna Philharmonics, the Royal Concertgebouw, the Santa Cecilia… – and also embraces upcoming talent. Charisma and commitment were evident from the off. For the opera Fidelio, formerly known as Leonore, Beethoven not only revised it several times but composed four overtures, three called Leonore and one entitled, would you believe, Fidelio. Leonore No.2 is, like its successor, symphonic poem-like in scope and similar in outline if with extra timpani notes at the beginning and the end and with different articulations en route. With Haitink conjuring expressive woodwinds and pregnant pianissimos (truly hushed) in the very measured opening, there was no doubt we were involved in something theatrical, the playing then ardent and chiselled in fast sections, trombones (these players’ only appearance) adding weight but not crudeness to the mix and with a nicely ‘rough’ off-stage trumpet solo, sounding from a turret, as it were. 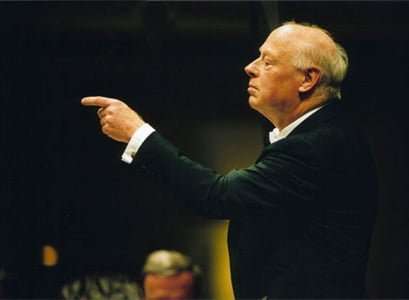 In Beethoven 4, “a slender Grecian maiden between two Nordic giants” (Robert Schumann), the giants being the ‘Eroica’ and the ‘da-da-da-daah’ Fifth, Haitink (the score in front of him remained closed) and his responsive musicians found the gloomy dawn of the Adagio introduction and then the exhilarating sunshine of the ensuing Allegro vivace, although the pair of trumpets were on the dominant side and upset the otherwise immaculate balances. If the slow movement was a little too civilised, the next movement was nicely equalised between the scherzo (vital) and trio (gallant) sections and the finale was fleet without being manic, space created between the notes and with just the right of amount of time for the bassoonist to get the multitude of notes in, often a dicey moment! All repeats were observed.

Yes, maybe a little more intervention on behalf of Haitink would have been welcome at moments, but it was all there bar the shouting (and such vulgarity is not a Haitink hallmark) and there was much to stimulate the ears in terms of variety of volume and lucid blend. We weren’t done, however. Enter a piccolo player and two carrying horns. It could only be Egmont. It was, the Overture from Beethoven’s score of Incidental Music, given with gravitas and no rushed fences, something saved for final victory, those militaristic trumpets now more appropriate to round off a concert that was something of a tonic in which music and selfless and compelling musicianship ruled.