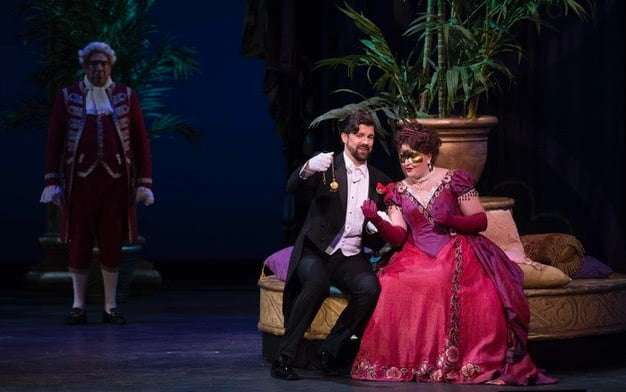 Palm Beach Opera concludes its 2019 season with a delightfully effervescent production of Die Fledermaus. With handsome (on-loan) scenery and costumes, proceedings are as pleasing to the eye as to the ear, while Dona D. Vaughn’s direction sustains the nonstop pace of the farcical plot and the choreography complements the music. David Stern’s brisk tempos generate high energy – from the Overture through to the final champagne toast.

Emily Blair, a first-year member of the company’s Benenson Young Artist Program, replaces Chloé Olivia Moore and is a fine Rosalinde, cleverly toying with – and getting the better of – her husband, Eisenstein. The ‘Csárdás’, sung as Rosalinde pretends to be a Hungarian countess, is a highlight; and Diana Newman similarly shows off brilliant coloratura to give a flamboyant portrayal of Rosalinde’s maid, Adele. 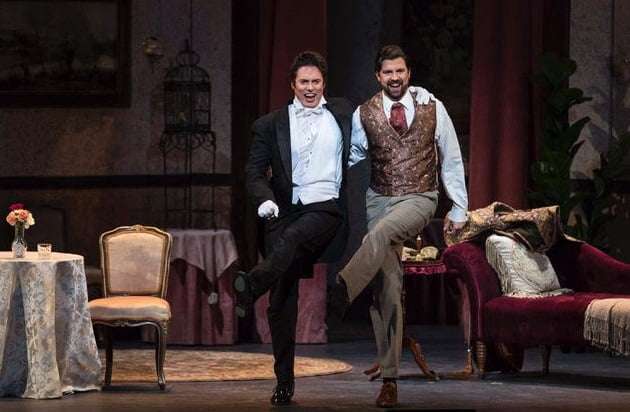 A bearded Stephanie Blythe, wearing a greatcoat decorated with medals, is convincing in the trouser-role of Orlofsky. Alongside the able Tobias Greenhalgh, her singing and acting are brilliant as she plays along with Dr Falke’s elaborate prank on Eisenstein, a trap to gain “the revenge of the bat” for a practical joke perpetrated on him. Following the tradition of interpolating extras to divert the guests at Orlofsky’s soirée, Blythe, with the chorus, gives a rendition of ‘Nessun dorma’ that would make any tenor proud.

Jack Swanson is winningly comedic as Alfredo, adding snatches of Italian arias when wooing Rosalinde, and suitably flustered when he is mistaken for Eisenstein and arrested by the prison warden, Frank, taken excellently by Wayne Tigges. As the real Eisenstein, Zach Borichevsky is consistently entertaining as the wind goes out of his sails as he unsuccessfully tries to seduce his own (disguised) wife. 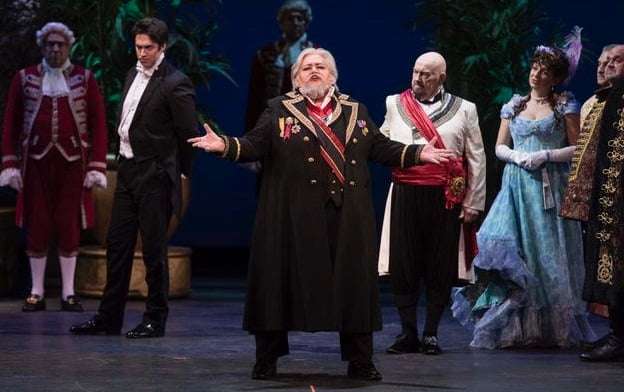 Falke’s plot has Eisenstein and Frank in the guises of French aristocrats, although neither speaks the language, making their attempts to converse hilarious. Actor John Felix is amusing as the jailer Frosch, misapprehending much going on around him, such as confusing “chevalier” with “Chevrolet”.

The excellent vocals are matched by clarity of diction, minimizing the need to consult projected words. The English translation of sung texts serves the plot – if at the expense of some groan-worthy rhymes. The oft-employed combination of original-language lyrics with English dialogue and supertitles would be preferable.