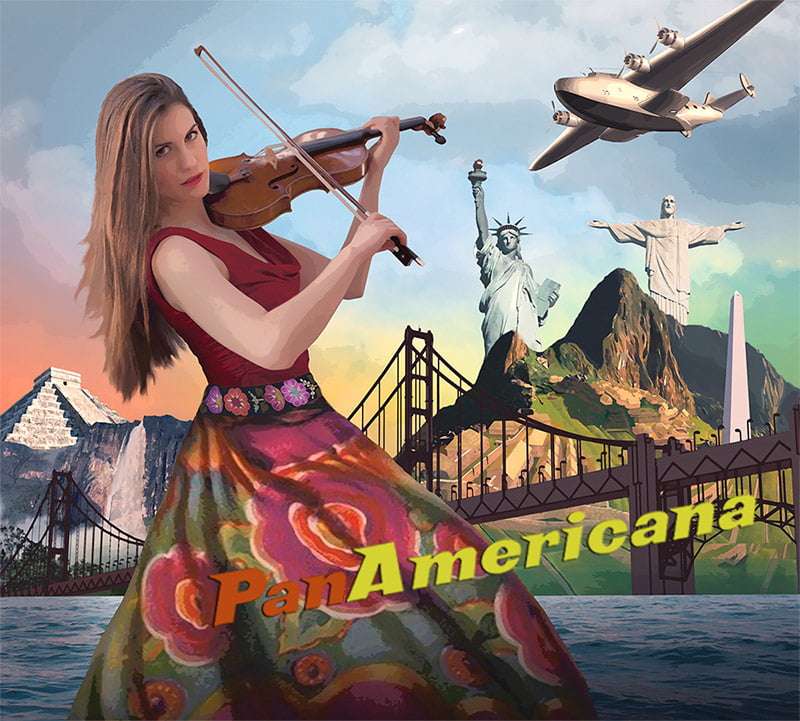 It was presumably serendipitous, but entirely apt, that this generous compilation of New World works brought some much-needed Latin American sunshine on the day Britain turned the clocks back and darkness had seeped through the cityscape earlier than ever. With the backdrop of Milton Court’s stage decorated with brightly coloured pompoms behind a small percussion set up, this was a bright, breezy journey through at least six countries in seventeen items, starting with guitarist Dimitris Dekavallas performing Leo Brouwer’s ‘Danza del Altiplano’ from his Three Latin American Pieces, its insistent rhythmic vitality matched by Dekavallas’s left-hand dexterity.

Joined by his Duo Diez partner (named because their two instruments, violin and guitar, make up ten strings), Violeta Barrena, the first of a number of US composers influenced by South America was Gary Schocker’s ‘Rio’, the second of his five Dream Travels originally composed for flute and guitar. Aping the soaring sultriness of Brazilian music it led us further onto the South American continent when percussionist Wilmer Sifontes joined for a maracas masterlcass in fellow-Venezuelan Antonio Lauro’s Carora. Back to Brazil for Villa-Lobos’s ‘Aria’ from Bachianas Brasilieras No.5 – here with Dekavallas filling in for the eight cellos, accompanying soprano Christin Wismann in the heady vocalise and dreamy, atmospheric Portuguese verse. A move south to Ginastera’s Argentina and a change to piano, with Echoes Festival artistic director Helen Glaisher-Hernández, for a dark-hued lullaby, Arrorró, before Barrena returned for a pair of violin and piano items, with the first of Gershwin’s Three Preludes wittily and virtuosically arranged by Heifetz, followed by the more languorous ‘Song’ – the middle piece from André Previn’s Tango Song and Dance (1997).

The first half ended with three songs – ‘Somewhere’, from West Side Story, with Wismann as Maria and Luis Gomes as Tony; Mexican Carlos Chávez took us to Ecuador for Quisara ser danzantito; and returning to Cuba for Lecuonoa’s Always in My Heart with Wismann giving us the English and Gomes the Spanish.

Pairs of songs opened and closed the second half – with Venezuelan Antonio Estéves’s lullaby Arrunango perhaps heightening the disappointment that Aaron Copland was represented by ‘At the River’ from Old American Songs, much too Puritan in his hymning (thankfully we only got four of the six verses), when Copland left other more infectiously Latin works that might have been included. No complaints about the authenticity of Celso Machado’s Pé de moleque (either road in Brazilian or a popular peanut-based sweet), complete with bongos, or Piazzolla’s ‘Nightclub 1960’ section from L’histoire du tango; both courtesy of Duo Diez.

In the final instrumental item , for piano and percussion, Glaisher-Hernández explained that Ricardo Lorenz’s Salsa inglesa was only partially about what Venezuelans’ call Worcester Sauce. The music makes use of an English theme (which she tantalisingly mentioned would be played again in four years’ time), but I confess that I was too fascinated with Sifontes’s expertise at various percussion instruments to work out the enigma. The last two official pieces grew instrumental requirements, including the return of Ian Anderson on viola and Vanessa Lucas-Smith on cello. The excerpt from Villa-Lobos’s only Broadway musical, Magdalena – the culinary ‘Food for Thought’, featuring Wismann – prefaced Gottschalk’s Cuban Country Scenes, where Wismann was joined by Gomes again, but also baritone Chris Childs Santos as two male suitors to a girl who says “no”. Not only was the whole company assembled, including an unaccredited small-guitar player (a charango, I think) but we had a troupe of six female dancers who brought some traditional folk dancing colourfully to the stage.

Thankfully, that was not all. An additional number was danced by four couples – even if a sudden crisis saw Dekavallas dart from the stage, so the music was without the guitar. Here the girls’ colourful dresses were contrasted with the men’s white trousers and shirts, all adding to the South American sunshine that had characterised the show.