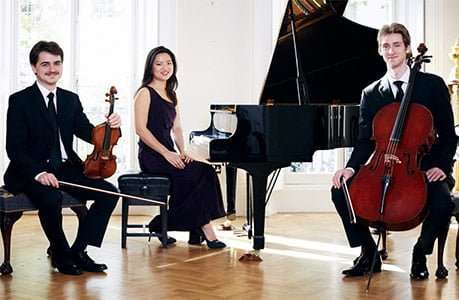 For the second of the Park Lane Group’s New Year Series of five evenings at the Purcell Room the “Frontline Composer” was Mark-Anthony Turnage, who in the pre-concert discussion conceded his early reputation as the “bad boy of music”, but was now seemingly comfortable in maturity with his status as one of the leading central figures in contemporary British music. Selections from A Few Serenades (2004) and the brief Milo (2009), both for solo cello, and a complete performance of True Life Stories, for piano, showed that in the last dozen or so years Turnage has on occasion embraced a gentler, more lyrical means of expression than in former times. Each piece had its own particular quality of beauty, delivered directly and sometimes very simply. Qualities such as these reveal a confident composer who no longer needs attention-seeking devices to grab an audience.

The mainframe of the evening event consisted of three piano trios by Turnage, which can be played together or separately. First of all we heard A Slow Pavane (2005), the basic Renaissance dance form enhanced by “changing meters and syncopation” which grew in intensity as the piece progressed. This was followed by a birth-centenary tribute to Sir Andrzej Panufnik, his Piano Trio No.1, first composed in 1934, then destroyed in the 1944 Warsaw Uprising, and later rewritten from memory. This elegant work in three movements shows the influence of 1930s’ neoclassicism, though the Largo in particular has a “lush lyricism”, as pianist Annie Kim aptly described it in her note, and there are high spirits in the jaunty finale. The title of Brian Elias’s Pythikos Nomos (1988) refers to an ancient Greek musical form invented to describe the battle between Apollo and the monster on the slopes of Parnassus. Six episodes – the battle, hymn of victory and so on – are painted in a dramatic dialogue between clarinet and piano. This work was framed by two brief and pithy Turnage pieces for the same combination, Carnac (2004) and Falling Apart (2012).

The recital’s second half began with the second Turnage piano trio, A Short Procession (2004), a mostly restrained, atmospheric piece, almost Romantic in expression at times. There followed a tribute to the late Sir Richard Rodney Bennett in the shape of his Duo Concertante of 1986, an angular, spiky work for clarinet and piano in three connected sections. The atonal writing here is far from Bennett’s more accessibly popular style, and intensely serious.

Manic Pixie Dream Girl, written for clarinet and piano by the 26-year-old Shiva Feshareki in response to a PLG commission, was then given its first performance. This “fairytale”, which depicts the life journey of the subject of the title, clearly shows progress that was full of agonising hazards. While the piano provides abrupt commentaries, the clarinet takes centre stage with an amazing display of mostly very abrasive, aurally very uncomfortable gestures. The instrument is taken to what must surely be the limits of its possibilities. This is music “in extremis”. The playing of Max Welford was almost beyond belief in its supremely confident accomplishment. After this display, the third and last Turnage piano trio, A Fast Stomp, which ended the evening, came as something of a relief: its pungent rhythms seemed sometimes reminiscent of Bartók. Was an echo of a passage from this composer’s Music for Strings, Percussion and Celesta deliberate? Probably not.

So far I have only mentioned Max Welford’s clarinet playing. In fact every performer during the evening showed immaculate technique in what was clearly often difficult territory. But more than that, there was a high degree of maturity, concentration, commitment and energy on the part of all the young players concerned. How lucky modern-day composers are to have such expert and sympathetic advocates.