In a nod to this year being Benjamin Britten’s centenary, the Philharmonia Orchestra included a novelty, his (here 8-minute) Young Apollo, music first played in Toronto in August 1939, with the composer as pianist. He withdrew it after the second performance and it was not heard again until after his death (in 1976) when several pieces he’d rather we didn’t hear started to appear! 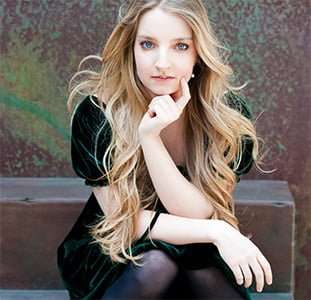 For Young Apollo, based on Keats’s poem Hyperion, Britten fashioned for piano, string quartet and string orchestra a glowing and dancing piece to represent “the new, dazzling Sun-god, quivering with radiant vitality” that works well enough descriptively but also seems musically rooted to the spot. For all its imaginative touches, with gestures that suggest fallout from the slightly earlier Variations on a Theme of Frank Bridge (also for strings, and a masterpiece), Britten rather gets into tight corners and saves the piece with deftness if not development. Young Apollo is worth the occasional airing, and was very persuasively realised here. Lise de la Salle played the piano part with brilliance and relish from within the orchestra, the Philharmonia’s musicians (Zsolt-Tihamér Visontay, Fiona Cornall, Rebecca Chambers and Karen Stephenson forming the quartet) responding with vigour to Andrew Davis’s zesty direction that ensured the least-possible immobility.

With a nudge forward for the piano to the soloist’s position, and the addition of pairs of horns and oboes, one of Mozart’s first original piano concertos (the first four are adaptations), written for a Mademoiselle Jeunehomme (her name sometimes added as a soubriquet), was next up. Two centuries and more on, another young French pianist of distinction, Lise de la Salle, gave us K271 crisply played but somewhat lacking in colour and sometimes impetuous, with some right-hand notes stabbed at. Yet it was a likeable and enjoyable performance, given with joie de vivre, attentively accompanied, well-made cadenzas (presumably the pianist’s own) although some solo spots in the too-nifty finale owed more to her than to Wolfgang Amadeus and created a cul de sacs. The finest music-making came in the slow passages; the soulful Andantino was elegantly and eloquently delivered, and the finale’s interpolated Minuet wafted in from the Elysian Fields.

After the interval, a magnificent and wonderful performance of the Vaughan Williams, first and foremost a great symphony (as are all of his nine) in which picturesque and evocative details, and some jolly japes, are secondary to the inspirational and transfixing music that hits the emotions deeply. Andrew Davis, conducting the finally-revised score, of course – did our experiencing the longer original version (completed just prior to World War One) cease when Richard Hickox died prematurely? – is a seasoned conductor of this composer and he brought all his experience and compassion to this compelling performance, played poetically and with power.

If Ralph Vaughan Williams’s music is not played enough in relation to its magnitude, when the outing is as distinguished as this, then one has something special for the ears and what lies beyond them. It was just three months ago at this address that Mark Elder and his Hallé gave us a rendition of A London Symphony (that its composer contemplated entitling “A Symphony by a Londoner”) and which was also rather special. Suffice to say that Davis delved acutely into the work, its suggestiveness, profundity, rambunctiousness, blissful calm and glorious melody. Solo work – cor anglais, viola, horn – was especially eminent in the slow movement. Dynamics were meticulously observed throughout, and tempos and their relationships were spot-on, not least the spectral scherzo that was perfectly articulated and detailed. And, in contrast, moving into it attacca, Davis gave us a hard-hitting account of the baleful and impassioned finale, Vaughan Williams’s unexpurgated transcription of the grimy and impoverished London that he also knew; here the climax seared and the ‘solo’ gong stroke rang out … and then to the opening of a new day, the ‘proud’ River Thames still gently lapping. Great stuff!