“Step back in time with the Philharmonia Orchestra for a show bursting with the songs and street music of 1920s Berlin. The spirit of the cabaret is reflected on-screen in still and moving images – of cartoons and paintings, scraps of films and photographs, and snatches from poems, stories, plays, diaries and letters. Art created during the Weimar Republic was suffused with echoes of street life and popular culture: with noisy crowds in bustling streets and markets, the clatter of patriotic marches and political rallies, and, above all, the songs of the cabaret singers.” [SBC website]

The second, final leg of the Philharmonia Orchestra’s centennial Weimar Berlin series opened with the ninety-minute To the Cabaret! in the atmosphere-resistant Queen Elizabeth Hall. The evening was one of Gerard McBurney’s immersive, educative, multi-media projects, along the lines of his Beyond the Score events. 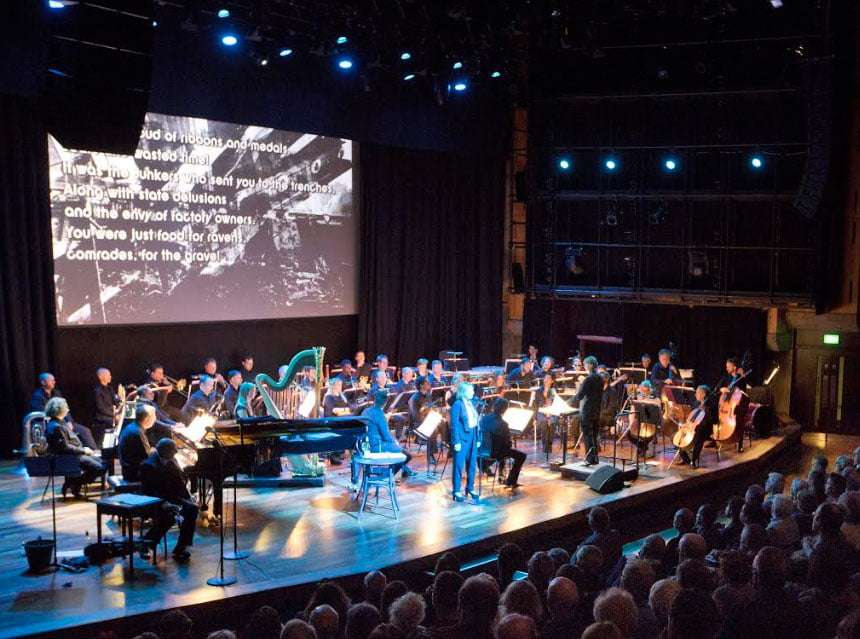 The cabaret came with a biggish orchestra plus a chorus of saxophones, piano, accordion, banjo, and a lot of percussion, narrator Simon McBurney, brother of Gerald (replacing Toby Jones), two singers, Esa-Pekka Salonen, even more sphinx-like on the darkened stage, and some very sophisticated back projections of people, Berlin sights, jolts of atmosphere and various song-texts – a long way from the Kit Kat Club.

The short-lived Weimar brand depended on the cynicism and anomie of the period – a hopeless, who-cares?, what’s-the-point? alienation. As with politics, this was showbiz for ugly people magnetically drawn to the grotesque, the amoral and easily sated appetites. Hardly any of this came across in a concert semi-staging that presented world-weary nihilism as a sort of Weimar variety-show, an artwork for our aesthetic consideration. Simon McBurney read extracts from contemporary writings by Joseph Roth, Erich Kästner, Georg Grosz, Alfred Döblin and Berthold Brecht. He does a good line in bittersweet resignation and despite his flapping scripts he managed to recreate the ghost of a dissipated, powerless everyman with his eye on the bottom of a glass.

The format had the odd effect of making the orchestral extracts – Schulhoff, Wilhelm Grosz (no relation to painter/writer Georg), Eisler, Krenek, Weill – lose their easy-listening emotional back-up to become serious and just a bit boring, and the nearest the evening got close to crossing the footlights was in Dagmar Manzel’s versions of songs familiar, predatory and lost. Some of them were long, and, with just piano accompaniment, had the time to resurrect the emptiness of the Weimar spirit. There were a couple of numbers from Loré Lixenberg, including Schulhoff’s notorious Sonata erotica, a notated groan- (rather than sprech-) gesang of a woman having vigorous congress, ending with Lixenberg hoisting her voluminous skirts to pee noisily into a bucket. She opened with the scene-setting screaming version of ‘Deutschland über alles’, also by Schulhoff – and, as in the closing credits of the film of Cabaret, the show’s concluding projections almost subliminally ushered in swastika images.

The cabaret going on in the QEH foyer afterward rather stole the show, courtesy of the LGBTQ Raze Collective along with some Philharmonia players. The hosts Bourgeois and Maurice were the sensational opening act, with a song (written by them?) about babies, which was the funniest thing I’ve heard in a long time, the essence of non-PC, although the even more extravagantly dressed Sadie Sinner and Rudy Jeevanjee reverted to the maudlin, PC and self-conscious straight and narrow for their turn, which obliterated immediately any cabaret zest.