Gershwin
Porgy and Bess – opera with lyrics by DuBose Heyward & Ira Gershwin, based on Heyward’s novel Porgy and its adaptation as a play by the author & Dorothy Heyward [“official world premiere” of University of Michigan’s Critical Edition; sung in English, with English Met Titles] 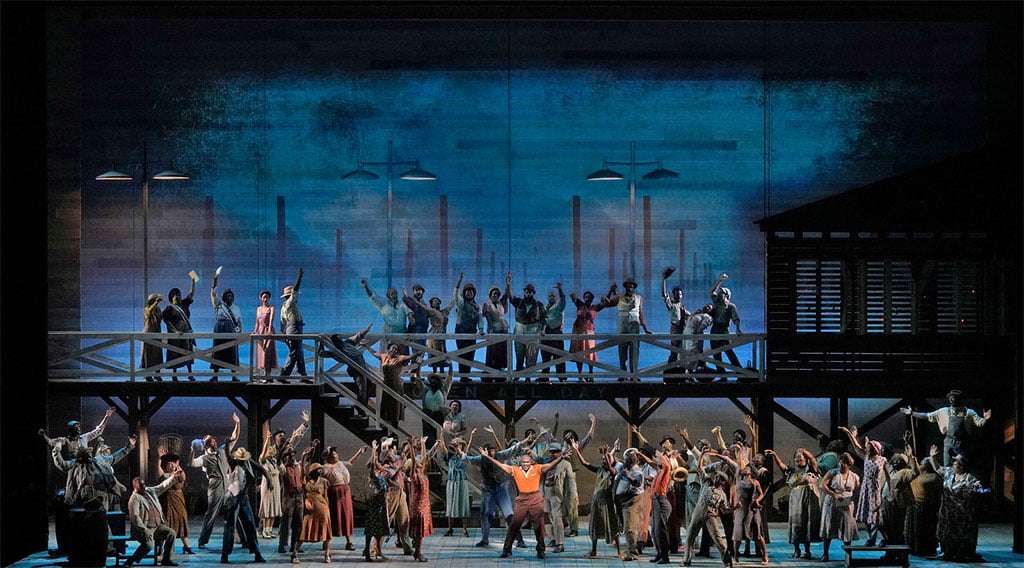 Metropolitan Opera premieres James Robinson’s lively production of The Gershwins’ Porgy and Bess, and David Robertson sure-handedly brings out the scale of this masterpiece, as well as the many popular tunes and jazz and gospel influences. As required by the Gershwins’ estate, all of the singers are black, including the excellent sixty-member chorus. White policemen, detective and coroner speak but do not sing as they treat the black citizenry with high-handed disdain, an unsympathetic portrayal that resonates with present-day controversies over police-community relations.

The new Critical Edition (albeit a work in progress) is not a reworking of the opera, but rather seeks to create a definitive version by making restorations, corrections and reconciliations of discrepancies among extant versions of orchestral scores, orchestra parts, and piano-vocal scores. This production’s division of Porgy into two Acts rather than the original three appears to deviate from the Critical Edition, however, and it is unclear what other changes may have been made. 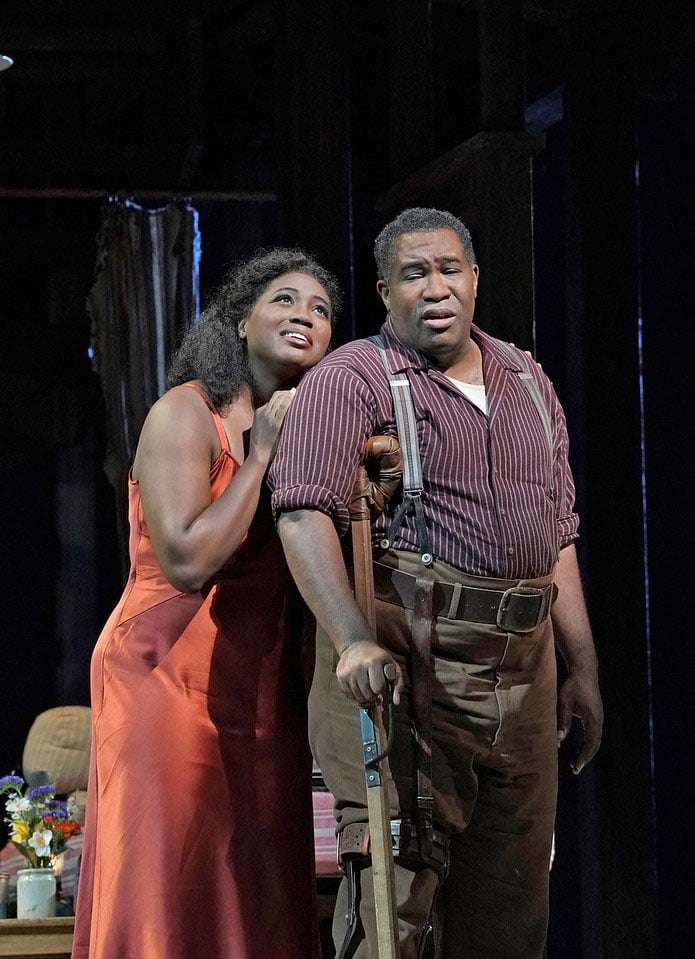 Eric Owens and Angel Blue give terrific performances. Blue depicts Bess as passionate but weak-willed, resisting but ultimately yielding to the sexual advances of Crown and the temptations of the “happy dust” offered by the drug dealer Sportin’ Life. Her voice soars above the chorus at the end of Robbins’s funeral, joins gloriously in duets with Porgy, and is tenderly touching in her reprise of ‘Summertime’, sung to the baby of the deceased Clara. Owens’s long experience shines through in his characterization of the disabled beggar at the center of the action, rolling the dice in the craps game, raising money for Robbins’s burial, and protecting Bess from his rivals, culminating in his killing Crown.

Frederick Ballentine, who gives a memorable portrayal of Sportin’ Life, captures the wit of ‘It Ain’t Necessarily So’ and he successfully tempts Bess in ‘There’s a Boat Dat’s Leavin’ Soon for New York’. Alfred Walker gives a chilling performance as the vicious Crown, his rich bass-baritone oozing menace as he attacks the hapless Robbins and later pressures Bess into remaining with him on Kittiwah Island, although taking a more jocular tone in ‘A Red-Headed Woman’.

Golda Schultz is a winning Clara, sweetly serenading her baby with ‘Summertime’ to open the opera, and Ryan Speedo Green as her husband Jake offers their child his own serenade, ‘A Woman Is a Sometime Thing’, and earnestly leads his crew of fishermen to work in ‘It Take a Long Pull to Get There’. Latonia Moore as Serena brought the house down with ‘My Man’s Gone Now’ lamenting Robbins, her murdered husband, and again in ‘Oh, Doctor Jesus’ her prayer for the delirious Bess’s recovery. Denyce Graves sees Maria as a powerful ethical force in the Catfish Row community, warning off Sportin’ Life in ‘I Hates Yo’ Struttin’ Style’ and in a gorgeous trio in the final scene, joining Serena in trying to dissuade Porgy from following Bess to New York.

In noteworthy cameo roles are Leah Hawkins, who shows off remarkable high notes as the Strawberry Woman, and Chauncey Packer who (after being killed as Robbins in the opening scene) appears as Crab Man, his cry of “She crab, she crab” reminding of the delicious soup that is a must for any visitor to Charleston.

Michael Yeargan’s versatile rotating set and Catherine Zuber’s costumes present Catfish Row not as a place of rag-tag poverty, but as a bustling and industrious community in which religious fervor affects every aspect of life, as reflected in the spiritual-like music that comprises much of Gershwin’s score. Camille A. Brown’s delightful and energetic choreography pervades the production, and Robinson’s direction is brimming with life, aided by David Leong’s brilliantly staged fight sequences. During the brief intervals between scenes, Luke Halls’s projections of the Carolina seacoast are accompanied by the sound of flowing water. Donald Holder’s lighting and recorded thunder make the hurricane episode very effective as six voices seek to drown out the tempest with prayers.