[All pieces sung in Russian, with English surtitles for the semi-staged Renard and Mavra] 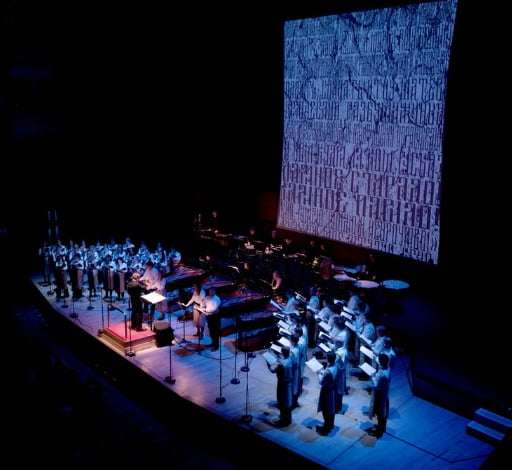 As part of the Philharmonia Orchestra’s Myths and Rituals Stravinsky series, this second concert was devoted to three vocal works in celebration of Russian folklore and nostalgic farewell to the composer’s motherland. Although The Soldier’s Tale is conspicuously absent in the programming, this particular evening neatly underlined the composer’s evolving theatrical ambitions and stylistic curve from Russian ballet to the neo-classicism of the 1920s.

The earliest piece Renard (completed in 1916) is a burlesque written in Switzerland and based on a Russian folk-tale from Alexander Afanasiev’s collection. Its fusion of song and dance, arguably, makes it Stravinsky’s most immediately appealing work from these years. Directed by Irina Brown the whole was superbly rendered by a cast of male singers and dancers from the Mariinsky Theatre who performed on a raised stage behind the orchestra. Colourful costumes, disguises and comedy-sized noose, axe and scythe added to its pantomime atmosphere, all eye-catching and integrated through Quinny Sacks’s choreography.

Despite the vocal extremities for the basses, the singers were convincing in their various roles as fox, cat, cock and ram. Throughout, Esa-Pekka Salonen was an ideal guide for this nonsense tale, conducting the eighteen-piece band with its astringent soundworld dominated by woodwinds and brass. Especially telling was the exotic contribution of the cimbalom played by Cyril Dupuy whose decorative flourishes seemed to mirror the acrobatics. 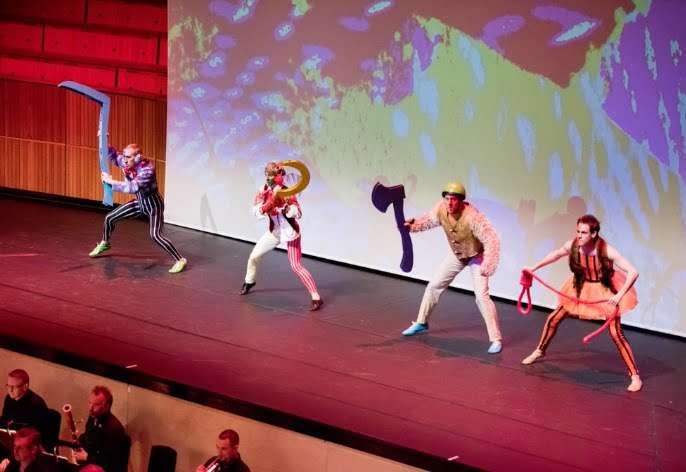 From one peasant tale to another we sped forward six years to Mavra – a one-Act pastiche (with parodies of Glinka and Tchaikovsky) based on a comic poem by Pushkin. No props here but two screens and a bench around which four singers delivered its frivolous plot. Vassily, a clear-voiced and heroic Artyom Melikhov is enticed into a household as ‘Mavra’ the cook by his lover Parasha – a suitably flirtatious and vocally agile Natalia Pavlova, only to be discovered shaving by Pavlova’s mother, Evalina Agabalaeva (whose low register needed better projection) and her neighbour. If the singers were sometimes overwhelmed by the unusual orchestral sonorities it was a vivid performance with well-judged tempos that underlined the music’s syncopated and asymmetric rhythmic patterns.

It was rhythm, more a rhythmic juggernaut, which formed the underbelly of Les noces in an account that seemed to be less about a peasant wedding than Stravinsky’s preoccupation with sonority. The absence of surtitles, staging and dancers enabled a greater focus on the composer’s unprecedented ensemble of four pianos and percussion. At least it might have done had not the pianists (fronted by Pierre-Laurent Aimard) been mostly hidden from view by the soloists and 40 or so Philharmonia Voices. Occupying raised positions behind these were the timpanist and five percussion players whose combined rhythmic energy – sometimes verging on the savage – made for hypnotic listening.

But there were times when I wanted more clarity, more immediacy especially from the pianos. The singing was convincing, with a notable Margarita Ivanova and a well-drilled (if over-large) chorus that did much to enhance the idea that text is rhythm. Momentum was paramount in Salonen’s approach to the score. What ultimately came across was a peasant celebration, nicely summed up by H. G. Wells who, in a spirited defence of the work after its UK premiere in 1926, spoke of Les noces as “a rendering in sound and vision of the peasant soul … that will astonish and delight every intelligent man or woman who goes to see it.” Ninety years later, Les noces is still managing to do exactly that.