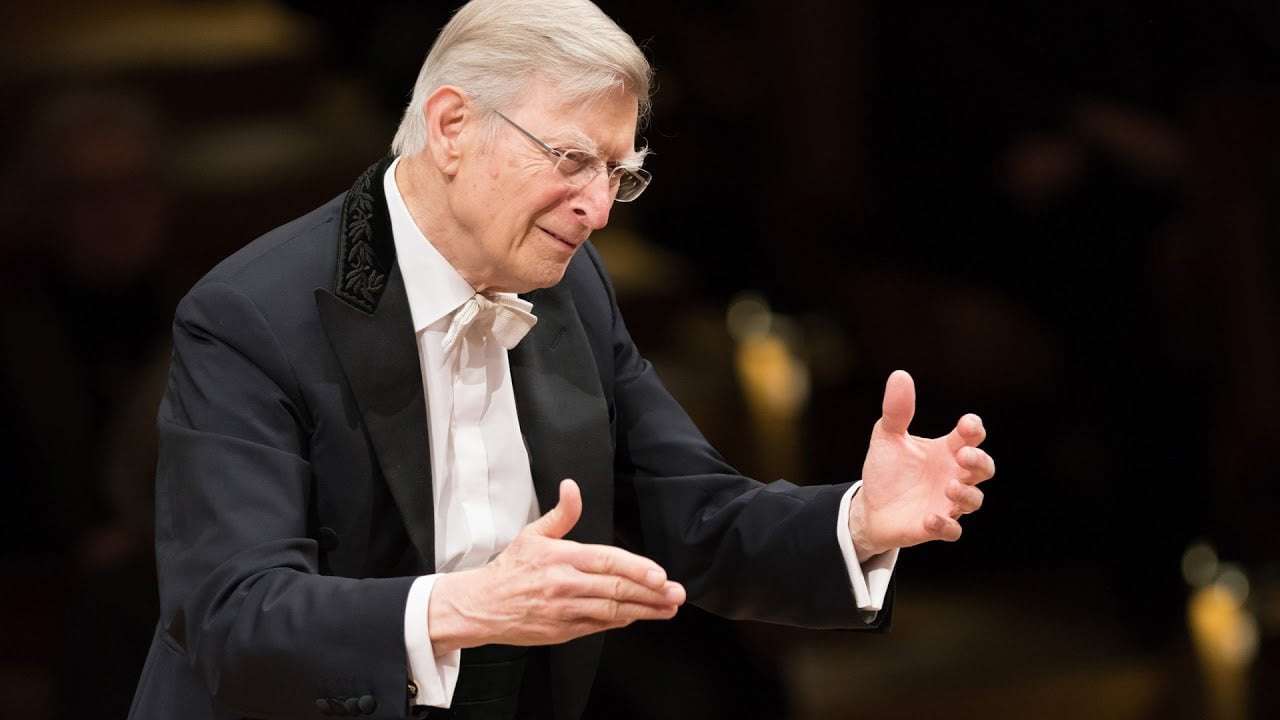 This considered coupling of two five-movement opuses also juxtaposed that in some respects ‘By the Brook’ from Beethoven’s ‘Pastoral’ Symphony influenced aspects of Berlioz’s ‘Scène aux champs’ (if with pastures new musically), the Frenchman’s fantastique composed in 1830 in the wake of François Habeneck – through either the Concert Spirituel or the Société des Concerts du Conservatoire – having introduced numerous Beethoven pieces to Paris, both Symphonies here further linked by the lively Herbert Blomstedt, belying that he’s in his ninety-second year – a brisk walk to the podium, no requirement for a chair when there, and conducting from memory, the scores on his stand remaining unopened, nonetheless a symbolic presence for the maestro.

These were performances of the highest calibre, as interpretations and through the Philharmonia Orchestra’s superb response, six left-positioned basses in the first half, eight in the second, antiphonal violins de rigueur.

Although Blomstedt takes Beethoven’s fast metronome markings seriously, he doesn’t overdo them. Thus the ‘Pastoral’ flowed without rush, a sense of joy and relaxation radiating in the first two movements respectively, the development of the opening one especially dynamic, and the ‘Brook’ itself ushered-in contemplative contours, snoozing sound-a-likes, and featured delightful woodwinds imitating birdsong, clarinet as cuckoo. And if there are greater-than pictorial dimensions to this music – not overlooked by Blomstedt, as the transporting Finale essayed only too poignantly, senza vibrato for its initial measures, introducing a new tone colour – then the prior Nature-painting had been pertinently graphic when the peasants were merrymaking (an elegant and earthy troupe to which valve-less trumpets added an edgy counterpoint) until dispersed by a tempest, cue piccolo and Antoine Siguré on ‘period’ timpani, crisp thwacks, trombones also in the mix.

As in the Beethoven, Blomstedt observed all repeats in the Berlioz, not that there are many in either work, two in each, and it’s always good to have the (unusual) one in ‘March to the Scaffold’ taken, the music itself glorying in swagger if with a few curious emphases and elongations in the brassy strides. Overall there have been wilder, more passionate, accounts of this hallucination-packed creation, but few as musically sovereign as this (the corners of ‘Un bal’ turned gracefully, for example), gradations of volume throughout scrupulously attended to across the five movements, the first two and final pair linked with virtual attaccas, the baton-less Blomstedt keeping the audience at bay by a simple if authoritative gesture. The Symphony’s introduction was dreamily expressive, which presaged the ‘Scene in the Fields’, beautifully done, Jill Crowther’s mellifluous cor anglais responded to by Tom Blomfield’s plangent off-stage oboe, until silence is the riposte and thunder is sounded, four timpanists in ominous harmony. Ultimately, allowing that the bell could have been darker-sounding and doom-laden, the gaggling Witches ended up having quite a ball, cauldron bubbling, the Philharmonia pulling out all the stops, Blomstedt as virile as when he cued the start of the Beethoven; quite demonstrative in fact.