Haydn
Symphony No.102 in B flat
Brahms
Violin Concerto in D, Op.77
Nielsen
Symphony No.2, FS29/Op.16 (The Four Temperaments)
LnRiLWNvbnRhaW5lcltkYXRhLXRvb2xzZXQtYmxvY2tzLWNvbnRhaW5lcj0iNmIzNDMzNmNmZTc3NWZiNGJlMTVjMmIwMzU3NWM1MjYiXSB7IHBhZGRpbmc6IDI1cHg7Ym94LXNoYWRvdzogNXB4IDVweCAxMHB4IDAgcmdiYSggMCwgMCwgMCwgMC41ICk7Ym9yZGVyOiAycHggZG90dGVkIHJnYmEoIDEwOSwgMTA4LCAxMDgsIDEgKTsgfSAudGItZmllbGRbZGF0YS10b29sc2V0LWJsb2Nrcy1maWVsZD0iODM3Y2ExZjc0MGRjZDdkOTdlMzQzOWMyYjIwMWZmZTMiXSB7IGJhY2tncm91bmQtY29sb3I6IHJnYmEoIDIzOCwgMjM4LCAyMzgsIDEgKTtwYWRkaW5nLXRvcDogMTBweDtwYWRkaW5nLWJvdHRvbTogMTBweDtwYWRkaW5nLWxlZnQ6IDEwcHg7IH0g

Members of the Philharmonia Orchestra
Anna-Maria Helsing [Music of Today] 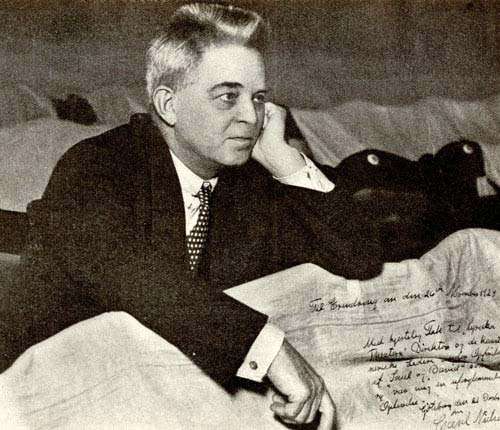 Antony Hodgson writes… Paavo Järvi’s series of Philharmonia Orchestra concerts featuring the Six Symphonies of Carl Nielsen uses a successful plan of including a Haydn Symphony and also a Concerto (including both of Nielsen’s), which results in a generous amount of music. Haydn 102 – one of his greatest Symphonies – made the ideal commencement here.

Järvi afforded respect to the 18th-century in his lateral division of first and second violins, the use of shallow timpani hit with hard sticks and the employment of full-length ‘period’ trumpets, the mellow tone of which is more suitable than that of the later shorter, narrow-bore instruments. The interpretation itself was more ‘modern’ however – grace-notes were of the short variety, the horns in B-flat were used in the lower octave – I missed their wonderful flaring effects in the Minuet and in the Finale as heard recently from Dennis Russell Davies, Anthony Halstead and Simon Rattle. I did however like Järvi’s measured tempos, the fierceness of the dramatic timpani crescendo in the first movement, the gentle pianissimos in the lovely Adagio and the vitality of the Finale. The decorations on repeats in the Trio of the Minuet were doubtless in recognition of ‘earlier’ style. To my ear they sounded merely quaint but no matter, a personal view of fashion is always welcome. 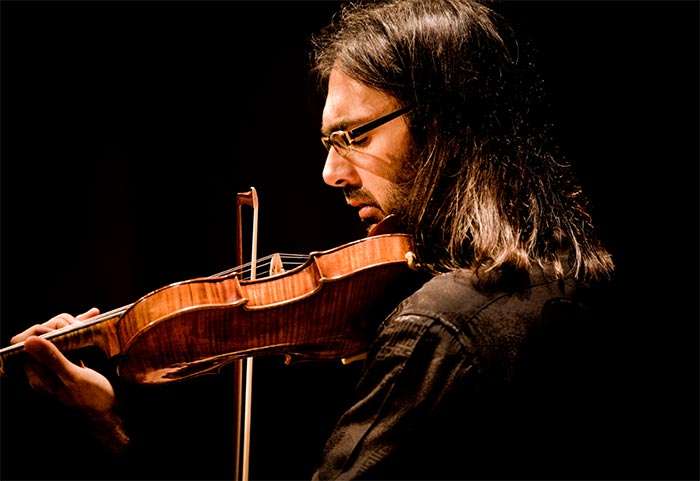 Brahms’s Violin Concerto from Leonidas Kavakos was very special. Often reviews deplore a spacious tempo for the first movement. Here the speed was time-taken indeed, but in the context of this interpretation it was ideal because Järvi never let the intensity slacken; the magically quiet sections, featured Kavakos sensitively weaving melodies through the hushed accompaniment yet the underlying impetus was not hindered. Above all the violinist’s tone was rich, his playing elegant and unforced, the sudden outbursts that Brahms uses for contrast firmly controlled; Kavakos made them a strong affirmation of a new theme rather than a challenge. Kavakos included Joachim’s cadenza. The beauty of tone in the Adagio was breathtaking; was Kavakos perhaps using the 1724 Stradivarius that he is known to own? The orchestral colouring was subtle and rich and was enhanced by the delicate beauty provided by oboist Gordon Hunt. The Finale was strong in rhythm; the conventional Hungarian ‘lift’ was given to the last note of bar 3 and Järvi hinted at the effect each time the phrase recurred. This was an inspired account, the quiet valedictory section leading to the ultimate bars was done so graciously that there was a sense of sadness knowing that it was about to end. 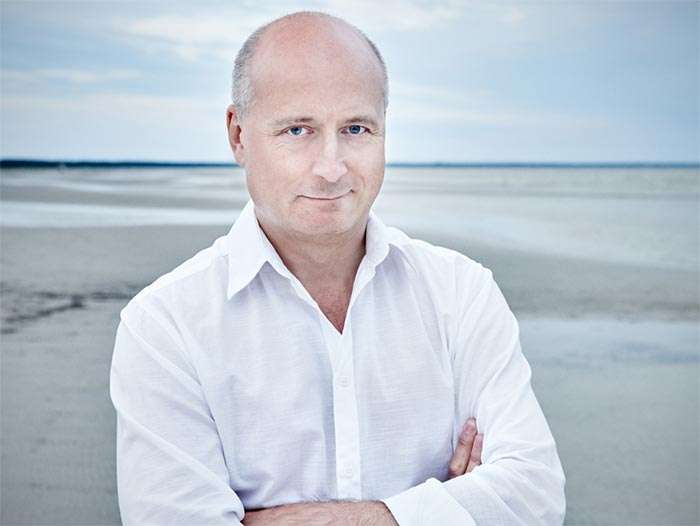 Paavo Järvi’s great appreciation of Nielsen was manifest in ‘The Four Temperaments’, which enlarged its scale. The choleric nature of the opening movement was achieved but the implicit anger was not made hasty and the breadth of tempo was most convincing making the music also strong and noble. The incisive chording was effective and the heavy brass, with important melodic significance, was superb. The phlegmatic second movement was a notable success, the slower tempo than is usual worked very well and Nielsen’s vision of a youth lying lazily on the sunlit sward was beautifully portrayed. The one sudden fortissimo was strongly exaggerated – an excellent idea.

Järvi’s expressive approach to the melancholy Andantino was a masterpiece of eloquent phrasing – the long opening melody being contoured with all the care that can be so effective in shaping a theme by Bruckner (there is little other connection between the two composers however) and this contemplative reading of so serious a movement made a suitable contrast with the wild Finale – marked Allegro sanguineo. Again trumpets, trombones and tuba were marvellous, and the fierce timpani solo was thrilling from the excellent Antoine Siguré. The concluding cheerful section should not be treated as a jolly march (but sometimes is). Nielsen warned against this – “the final march, though joyous and bright, is yet more dignified” – therefore much praise for Järvi for not hurrying: the Symphony ended imposingly. Overall there were some differences of approach to his recorded version.

Colin Anderson writes… Prior to the main concert, the Philharmonia’s long-established Music of Today series continued with an especially illuminating recital that focussed on contemporary music redefining that of the past. All four pieces proved well-worth getting to know. 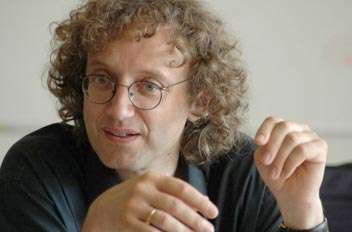 Fantasia (2006) by Johannes Schöllhorn (born 1962), scored for string quartet, flute and clarinet, is rather jaunty even though the original – attributed to Renaissance composer Orlando Gibbons – is fragmented across the sextet. Doubling the length to four minutes, Harrison Birtwistle’s Virelai (2008) owes to the 14th-century Flemish musician Johannes Ciconia, his ‘Sus une fontayne’, itself also looking further back and quoting from his teacher. Birtwistle’s fascinating treatment of it – for string quartet, double bass, flute, oboe, clarinet, bassoon, horn, trumpet and trombone – is rhythmically irregular and rather Stravinskian (if craggier than Pulcinella), counterpoint being dispersed and realigned, vibrantly.

The thirteen-minute In situ (2013) by Edmund Finnis (born 1984) involves five centuries-old composers, from Pérotin to Rameau. In addition to string quartet and double bass are alto flute, clarinet, percussion (things bowed, in effect suggesting a glass harmonica) and piano. Lyrical, half-remembered music (heard as if in a dream) yields to invention that is mysterious, cool and energetic, and always engaging. Also present was Betsy Jolas, belying by at least twenty years that she recently turned ninety (she was probably out clubbing later!). No prizes for guessing the composer that inspired Lassus Ricercare, a superb ten-minute piece for ten musicians – five brass (two trumpets, three trombones), two percussionists (utilising a variety of wood, skin and metal), harp, and two pianists, one doubling on celesta – written in 1970 for Pierre Boulez and his Ensemble Intercontemporain. Lassus Ricercare (using fifteen extracts of Lassus’s music) is both solemn and joyous, music of splendour and ravishing sounds and harmony, teeming with imagination.

Not every group can run to two pianos and pianists, but if programming Carmina Burana and/or Symphony of Psalms, then Lassus Ricercare would be a brilliant opener. Extraordinary that such compelling music has taken forty-six years to reach the UK. It received, as did the other works, very responsive playing from the Philharmonia members and clear and confident conducting from Anna-Maria Helsing, from Finland, associated with the National Opera and Oulu Symphony Orchestra as well as numerous other Scandinavian organisations, and no doubt benefitting from studies with Leif Segerstam, Esa-Pekka Salonen and Gustavo Dudamel.

Although well-attended, it was clear when returning to the Royal Festival Hall’s social areas that many more people had stayed away. A shame, for the Jolas alone was worth the earlier start. The next Music of Today (which is free and informal) is on January 19, music by Bernd Richard Deutsch (he’s Austrian), when one can expect a Mad Dog and a Red Alert.